Everything you need to know about the couple’s idyllic retreat. 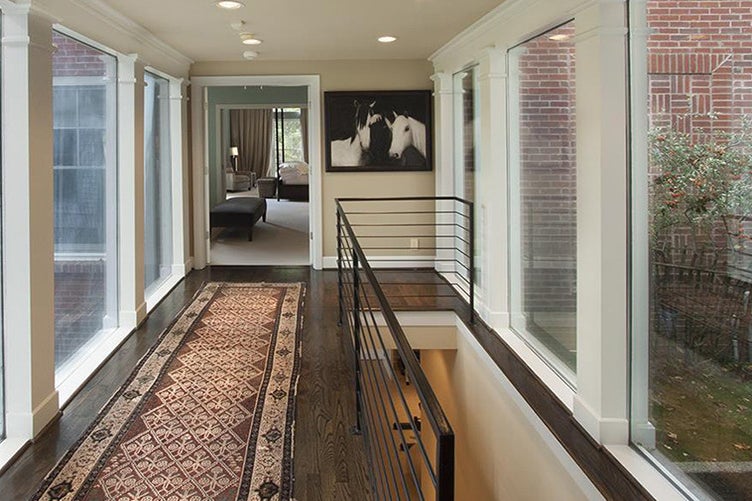 Just because a home has star power, that doesn’t mean it’s guaranteed to sell like lightning. Take it from Oscar winner Nicole Kidman and her country star husband Keith Urban: It’s been eight months since the duo put their Franklin, Tennessee abode on the market—and yet, there seems to be no buyer in sight. Though the couple had originally listed the home for $3.45 million back in December—a modest price tag compared to the $39-million NYC residence they were allegedly eyeing—that, yes, once belonged to Michael Jackson—the pair has since slashed a cool $700,000 off their asking price.

Situated on 35 acres of rolling hills and untouched woods in Franklin—a charming town just south of Nashville—the A-listers’ rural farmhouse retreat puts outdoor living first. With no shortage of acreage and room to move about outdoors—cue the private walking trails, garden, and volleyball court—we’re assuming an abundance of land was high on the couple’s checklist when they first purchased the property back in 2007 for $2.4 million.

Kidman and her hubby’s countryside spread is currently listed for a reduced price of $2.75 million, and encompasses the primary four-bedroom residence, a separate guest cottage, and a barn. Proving itself an idyllic country retreat, the pair’s gated red brick oasis has all the makings of a celeb-worthy escape from the city. Just see for yourself.

In true A-list form, the home is completely hidden from street view. Up a long, meandering drive, potential buyers will discover the main residence, as well as a sweet guest cottage and separate car park. Unlike Kidman and Urban’s other primary residence in Los Angeles, here, the couple and their two children, Sunday Rose and Faith Margaret, have plenty of room to roam and run. Spanning 35 acres, the property is primed for al fresco entertaining, four-wheeling, stargazing, and more.

A decidedly bright and sunny space for the Kidman-Urban crew to hang—and, of course, binge watch Big Little Lies—the home’s airy living room welcomes a flood of natural sunlight. While the residence is certainly move-in ready, we have to admit, we were a little shocked to find that the home lacks many of the traditional markings of a rustic-chic farmhouse. Where one might expect to find reclaimed wood shelves, shiplap walls, or upcycled cabinetry lies more contemporary finishes and furnishings.

Though the space doesn’t quite exude the same sense of luxury that celebrity homes all too often do (just peep LeBron James’s sprawling new pad in LA if you don’t believe us), we can appreciate this space for its traditional and simple design. Around every corner, mammoth-sized windows call immediate attention to the property’s lush landscape. How many houses can you name that make you feel like you’re up in the trees?

A galley-style kitchen sits just adjacent to the light-filled family room. With enough room for two to snag a seat at the counter come breakfast, it’s safe to say this is one of the larger galley kitchens we’ve seen. Surrounding windows and a backdoor leading to the patio help create the sense that the simple kitchen is much larger than it actually is.

While still a warm and inviting spot to feast, the couple’s modest cookhouse features a rich array of grays—from the saturated cabinets to the speckled granite counters. A quaint breakfast nook nearby offers dreamy views of the home’s private gardens and surrounding foliage. Sure, this kitchen might not be as showstopping as the all-white marble scheme in Gwyneth Paltrow’s NYC penthouse or as intriguing as Whitney Port’s retro Venice cookhouse, but it will certainly get the job done.

Of all the decorative hacks and structural tricks that have the potential to make a room feel bigger—like picking a lighter paint palette, hanging large mirrors, installing a floor-to-ceiling

and calling attention to exposed beams—tall ceilings will almost always work in your favor. The two lengthy light fixtures that hang directly in the center of the room and the accent lighting along the back wall naturally encourage the eye to gravitate upward.

More so than the other decorative elements within the space, the textured wall installation that divides the two sitting areas extends a defining rustic, woven touch to the room.

Several clean-lined guest rooms, a cozy den, and a bright office space also occupy the main floor. Not unlike the rest of the rooms in the home, the office nook—which backs up to the gym and overlooks the backyard—provides enough space for not one, but two full-sized desks. Talk about feeling primed for productivity. This spot is the perfect place to catch up on work, whether you’re going over a script, writing a new song, or taking an impromptu afternoon snooze on the sofa (because hey, being a celebrity is exhausting).

Around the corner, potential homebuyers will discover a cozier, kid-friendly nook. Finished with wall-to-wall carpeting and built-in bookshelves, the den offers a bonus spot for little ones to hang out when adults would rather seek privacy and peace of mind elsewhere.

Oh, and did we forget to mention that there’s also a fully-equipped gym on this level? Contrary to popular belief, no one is born red carpet ready—even if you do have four Golden Globes, two Emmys, and one Academy Award to your name. In the same way that having your phone fully stocked with killer exercise apps will hold you accountable, it’d be hard to forgo a week’s worth of workouts when your own personal gym is staring you in the face every day.

Upstairs, an entire wing dedicated to the sprawling master suite awaits. Featuring a spacious sitting room, separate bedroom, and enormous bathroom, Kidman and Urban’s countryside suite is (unsurprisingly) fit for the stars. The space even boasts a private balcony: So, day or night, the home’s owners can soak in ultra-lush views from the comfort of their colossal bedroom.

In the master bathroom, his and hers sides are divided by a large soaking tub that overlooks the backyard. With nearly 5,100 square feet to work with in the entire home, we can’t blame the twosome for going all in on a colossal ensuite. This bright and airy room is one we wouldn’t mind calling our own—that, and the enormous master walk-in closet.

While there’s no telling when the duo will find a buyer for their rural abode, we’re guessing they’re not exactly breaking a sweat just yet. Over the years, the pair has accumulated a number of homes (much larger and more luxe than this one) across the globe. Only a stone’s throw away, the Kidman and Urban clan can often be found hanging out at their palatial Nashville estate—the family’s primary residence.

According to Variety, the duo first purchased the 12,000-square-foot pad back in 2008, just shortly after they snagged this hidden rural retreat. Dubbed the “Queen of Northumberland,” the sprawling estate comes equipped with seven bedrooms, eight full bathrooms, a home theater, pool, and tennis court. This past February, Kidman revealed a sneak peek inside the glamorous spread via Instagram in a post capturing her cat, Queen Snow, peering out the front window. “I just wanted to introduce you to Queen Snow. I think you have already met her sister Ginger. Xx,” the actress wrote.

I just wanted to introduce you to Queen Snow. I think you have already met her sister Ginger. Xx

Though only a snippet of her life at home, the Honolulu-born actress, who clearly has a thing for soothing neutrals, offers a small taste of her personal style. Classic, understated, and elegant are just a few adjectives we’d use for the star’s light-filled entryway.

The couple’s property portfolio also includes a number of homes in and around Sydney, as both stars like to maintain a close connection to home (Kidman is Australian, while her hubby hails from New Zealand). Additionally, the duo owns a more contemporary home in Beverly Hills, as well as a duplex condo in lower Manhattan. While their other properties are decidedly more luxurious, we can’t help but love this rural abode for placing nature at its core. We just hope the A-listers won’t miss their lush acres too much, once they find their lucky buyer.

Last November, the couple was reportedly eyeing a swanky, eight-bedroom mansion located on NYC’s Upper East Side. The asking price? A whopping $39 million. Built in 1898, the Central Park-adjacent home is the epitome of old New York elegance. Between its limestone facade and oak wood interior, the lavish abode would have been quite the change from the pair’s southern escape.

Rumor has it that the home was planned to double as a gift for Kidman, who’s hoping to soon take her talents to Broadway. Despite its star-studded pedigree (the stunning townhouse was once home to renowned artist Marc Chagall, billionaire Marc Lasry, and the King of Pop himself, Michael Jackson), the pair has apparently decided to hold off on their expected move up north. You can take a tour of the couple’s could-have-been home here.

This story was originally published on December 6, 2017. It has been updated with new information.