For $55 million, you can live like the former power couple. 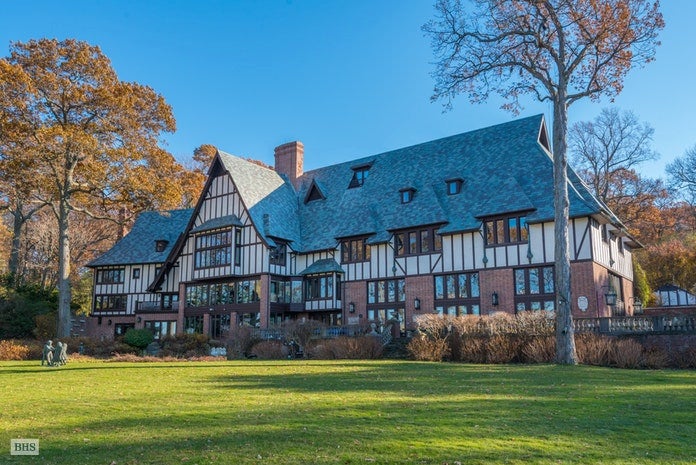 While ‘Brangelina’ may be no more, the once-iconic couple’s real estate legacy continues to live on. Known for their impressive portfolio, Angelina Jolie and Brad Pitt made a habit of picking up extraordinary properties—from a pied-a-terre mansion in New Orleans to a palatial French chateau—during their 12 years together. In addition to a slew of permanent residences, the globetrotting duo also took up a number of temporary abodes and vacation rentals, like this sprawling property in Lloyd Harbor, NY. Per Architectural Digest, the massive Long Island home that was once rented by the famous pair is now on the market for an astounding $55 million. Sami Hassoumi of Brown Harris Stevens holds the listing. We’ve reached out to Hassoumi for comment and will update when we hear back, but in the meantime are content to look through the home’s stunning features on our own.

Tucked away within its own private cove, the waterfront estate (dubbed “The Sassafras”) pays homage to traditional Tudor architecture with its tall windows, pitched roofs, and medieval-like half timbers. According to AD, the Jolie-Pitt clan stayed at the storybook-inspired home back in 2009 while Jolie was filming scenes for Salt. Much like the actress’ recently-rented Malibu mansion (which ran her a cool $95,000 per month), the A-listers’ former Long Island rental puts seclusion, ample space, and ocean vistas first.

Built in 1987, the enormous estate encompasses a primary eight-bedroom residence and two guest houses, including a quaint log cabin near the water’s edge. Inside, a 48-foot cathedral ceiling looms over the grand entrance leading to a study and formal dining space.

With plenty of room for the entire Brangelina crew to roam, it’s no wonder why the famed family chose this 20,000-square-foot mansion over a potentially crowded Airbnb during their brief stay out East.

While the home’s future owners will be able to enjoy uninterrupted views of the Long Island Sound from just about any of the main house’s 25 rooms, the wrap-around outdoor terrace serves as a particularly idyllic spot from which to relish waterside living during the warmer months.

Situated on 47 lush acres, the expansive property also boasts a tennis court, beach cabana, walking trails, and outdoor pool and spa. Avid boaters in particular will appreciate the direct access to a private beach and pier, where room for three Jet Skis, an 80-foot yacht, a 24-foot sailboat, and a 30-foot speedboat awaits.

Only an hour’s drive (or, if you’re a movie star short on time, a mere 15-minute helicopter ride) from Manhattan, we’re guessing that Pitt and Jolie booked this extravagant stay not just for its proximity to the water, but also for its proximity to the city. Plus, the powerful pair would never have been too far from star-studded company, considering celebs—from Julianne Moore to Beyonce—notoriously love spending time on the East End.

Want to live like Brangelina? You can check out the full listing and see more pictures of the stunning home here.