How a Tiny Tudor Became an Airy Family Haven 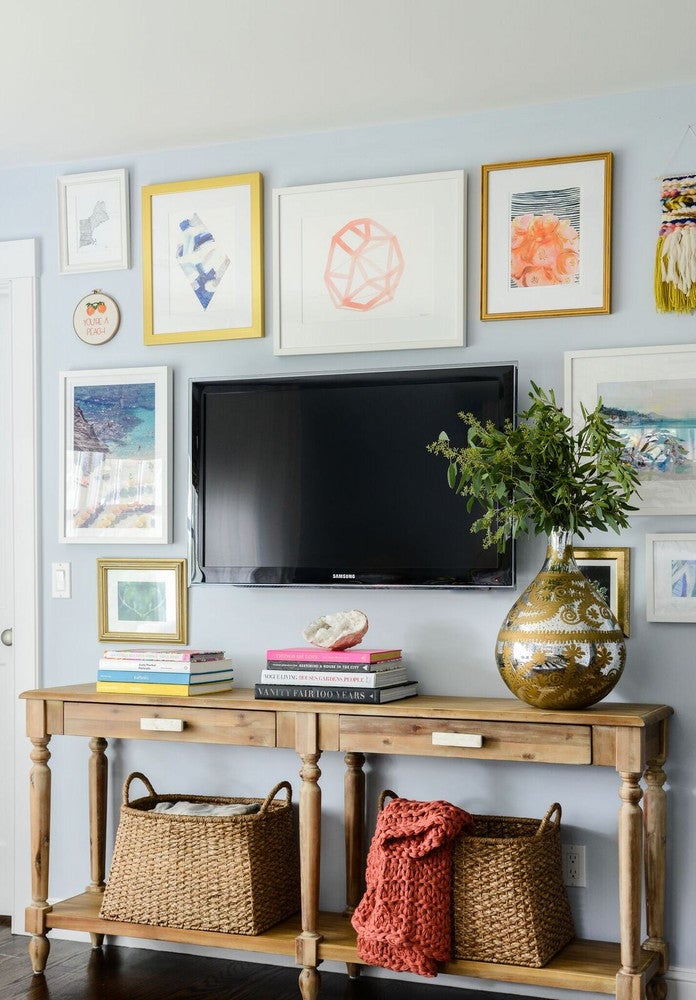 After living in their Tudor-style home in Wellesley, MA, a suburb of Boston, for a couple of years, the homeowners felt it was time to liven up the décor. Following a renovation that expanded the footprint of the house to accommodate their growing family, the homeowners brought in Boston area designer Dina Holland to infuse the place with color, creativity, and distinction. With three young children living in the house, it was key that the aesthetic feel fun and un-fussy; although it needed to appeal to mom and dad, too, since the couple often hosts adults-only gatherings after the kids have gone to bed.

“My role was to layer in personality,” says Holland. “We kept the backdrop light and neutral and introduced color through textiles, pattern, and original art.”

In the new master suite, Holland created a

around the television. “I don’t like the look of a TV just on the wall by itself,” says Holland. “The [%1318%] sort of frames it out.” She selected prints and photographs that share the same color story. Some were scored on etsy.com; others belonged to the homeowners. An embroidery hoop also hangs in the array. “I like to mix in three dimensional pieces for interest,” says Holland. Frames are a mix of white and gold tones, “we could have even used a black frame, too—there isn’t a rule that all frames need to be the same color for a gallery wall,” says Holland. Underneath, a console table from World Market anchors the wall, and open baskets offer storage for linens.

The first order of business was to add bamboo shades to the living room. “They filter the light, rather than block it, while ensuring a bit of privacy,” says Holland. A Caitlin Wilson rug featuring navy, pink, and coral tones grounds the room. The homeowners already owned the charcoal sectional, but to make the piece feel less dark, Holland brought in throw pillows in a various pattern and color.

And the teal chairs previously owned by the homeowners work very well with the updated scheme. “People think they need to match everything—if you have a navy rug, then all the furniture has to be navy,” says Holland. “But don’t get hung up on that concept. If everything matches perfectly, it can feel too contrived.”

The fireplace surround is painted a deep steel grey, which contrasts nicely with the white built in shelves. The bookcases are arranged with art, books, and other accents that are dear to the family.

The gleaming white kitchen already sparkled when Holland came on board, but it needed a little flair. To start, Holland added large gilded pendants above the island, which provide contrast with the room’s stainless steel appliances and hardware. “Again, don’t be afraid if all the finishes don’t match,” she says. “With all the stainless and chrome in the room, more silver would look flat and not as interesting as the gold.” Holland encouraged the homeowner to display her striking collected of blue and white ginger jars, which pair perfectly with the blue and white rattan woven stools from Serena & Lily.

The spacious new kitchen has a cozy nook with a table that the whole family gathers around for nearly every meal. Holland enhanced the area, which included a table and chairs already owned by the homeowners, with a custom pendant above the table. The pendant shade is sheathed in graphic Schumacher fabric and shaped like a clover. Pillows in various hues and pattern add punch to the built-in banquette, and a vibrant piece of art by Raven Roxanne infuses a dramatic flash of fun colors. “The added decorative elements throughout the house tells the story of the family without going overboard,” says Holland.