How an LA Lawyer Balances Both Comfort and Midcentury Design

Tour a light-filled home that excels in intentional design. 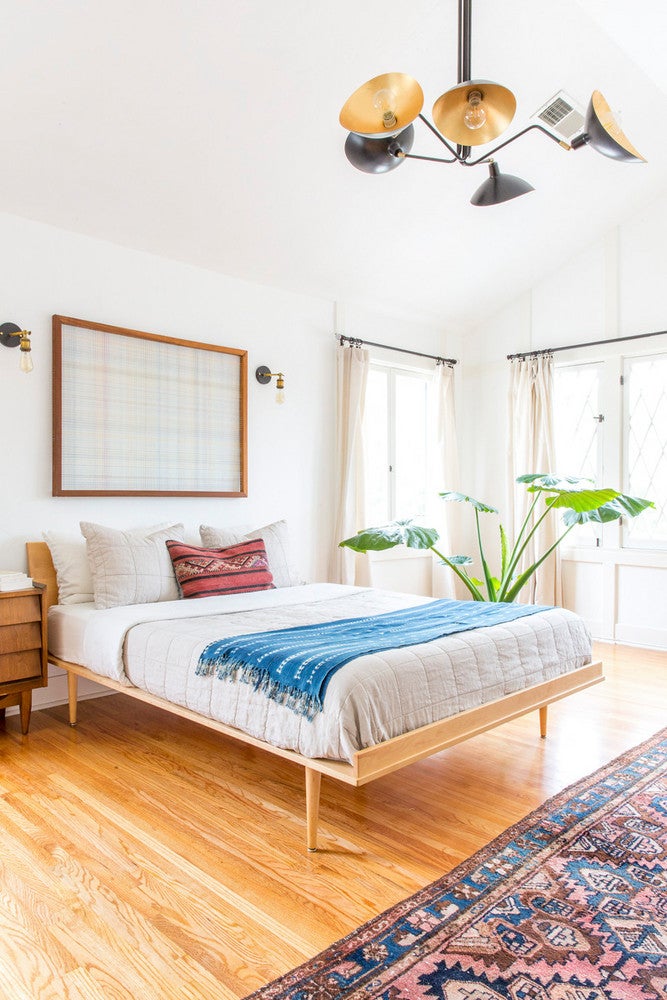 Since moving into her new home in October 2016, Mancy Pendergrass has had to make relatively few changes.

“Everything was done before we moved in,” she says. “We only bought rugs—I went to the rose bowl flea market for four months at a time looking at and buying rugs until I wasn’t allowed to buy any more—the dining room furniture, and some house plants. Everything else was existing furniture that we had, so it was about piecing together things we had collected over the past 10 years.”

While Pendergrass’ hassle-free renovation story might be a rarity, a lack of significant makeover work doesn’t correlate with a lack of effort. Every piece in the 1928 Tudor-style home was intentionally picked in order to flow together and create a home that was mindful of design, but still livable.

“We wanted the house to feel comfortable, and we have a lot of pieces we’ve collected that might feel cold on their own, but when you layer in records, art, textiles, and other pieces, it feels warm and functional,” says Pendergrass.

She and her husband, Alex, moved into the 1,700-square-foot home following the birth of their son. Looking for more space, they settled on the three-bedroom, two-and-a-half bathroom home in LA’s Highland Park neighborhood.

As for the motivation behind the home’s decor, Pendergrass can point to a very specific piece of inspiration.

“In 2012, there was an exhibit at LACMA about California design called ‘Living in a Modern Way,'” she says. “They reconstructed the Eames House living room, and I remember reading about [the House’s grandchildren’s] experiences sitting on the floor and playing on the rugs, and it just felt like such a livable space. It inspired us to bring in those design elements in a livable, functional way.”

In fact, the home’s predominantly midcentury aesthetic—save for the master bedroom, which Pendergrass dubs “minimal midcentury” and serves as a simply-decorated, calm sanctuary in the home—was entirely inspired by the California design scene. Pendergrass grew up in Nashville, where the main decor motif was traditional.

It wasn’t until she moved to California that she experienced more modern design and architectural elements. This contemporary edge is clearly visible: Clean lines, modern light fixtures, and brass hardware run throughout the home.

But while Pendergrass wanted to maintain a midcentury motif, functionality also played a role in the home’s design.

“Alex and I have a similar aesthetic; he really wants to make sure the house is comfortable, so sometimes he’ll say, ‘That looks too design-y.’ We didn’t want our house to look like a showroom or a catalog,” she says. “We also have a 3-year-old, so we have to be cognizant of that. We do have antique rugs, but they already show a lot of wear.”

Pendergrass did this by striking a balance between bright colors and contemporary elements, mixed in with more vintage-looking, cozier items—like the extensive antique rug collection. Little decorative pieces—like a small brass sculpture or the little blue vase that sits atop the bedroom dresser—further personalize the home.

“A lot of our things are presents that we have bought for each other,” she says of those details. “You can be very deliberate about what you put in your house when you live in a city that has really great stores, because you take your time to think about everything.”

As for her favorite part? The lattice windows, which are original to the home and offer tons of natural morning light. According to Pendergrass, they’ve allowed her to experiment with house plants in new ways.

“I didn’t have a lot of [plants] when I was younger because I would kill them, and our old house had a lot of succulents. Here, because of the placement of the windows, the succulents were not getting a lot of sun. So, I moved them to my office and have instead really enjoyed interspersing new house plants through the house,” she says. “I hadn’t decorated with plants as much until moving into this house, and now we have the space! There’s at least one in every room in the house.”