A Colorful Rental Transformation That Will Make You Rethink Temporary Living

How a designer turned an empty apartment into a space that feels like home. 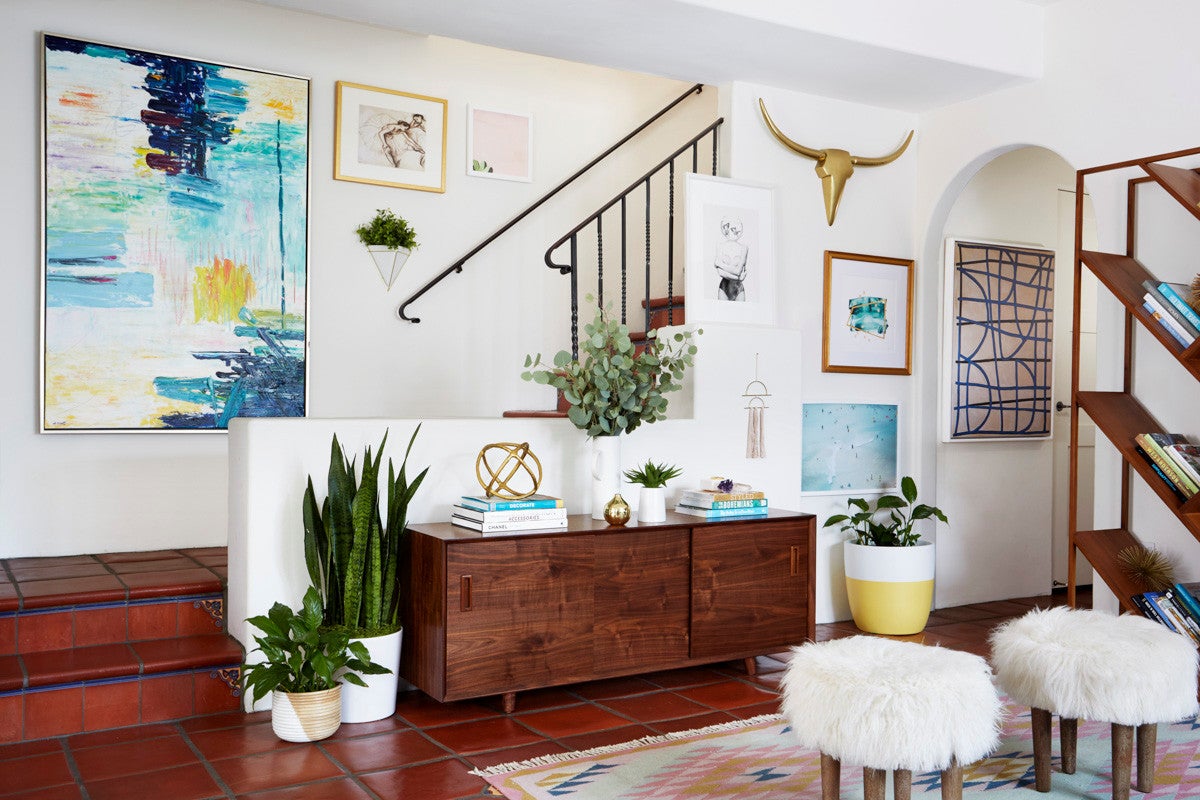 Oftentimes, rentals can feel impersonal due to the fact that their residents are only staying there temporarily.

Megan Henderson’s West Hollywood rental is not one of those. After choosing a townhouse apartment to be closer to work, Henderson recruited the help of her friend (and designer) Dee Murphy and set about turning the relatively plain space into a color-filled home she describes as “California Boho Glam.”“It’s like a whole paint studio exploded,” jokes Henderson. “Dee was very influential in pushing me towards color—I knew going into [the design project] that was her thing, and I was initially very resistant to it. One of the first pieces of art we had was this huge yellow heart above the fireplace, and I remember going, ‘Oh my god it’s so yellow!’”

Despite initial misgivings—Henderson describes her personal style as more feminine with an edge, hence the metallics and pinks balanced out with some more modern pieces—the duo transformed the space into a home that Henderson says is more reflective of her personality than ever. And they did it all in about six months.

“I moved from a 2,200-square-foot home to this approximately 1,400-square-foot place, so I downsized dramatically,” says Henderson. “I’d had furniture in my old place for probably a good ten years, and it was very much time for me to simplify and at the same time add some color to my life. I tend to like clean lines, but I was craving color and a bit more of an eclectic vibe.”

The need to downsize was taken quite literally: Henderson ended up somewhat inadvertently only keeping about three pieces from her old home. They kept to a budget by mixing pieces from local stores (“It’s cool to support the California artists,” Henderson says) with more affordable items from places like Target.

Situated in a historical area of West Hollywood—the property itself was once owned by a silent film director, and Harry Houdini’s dog is rumored to be buried there—the building has an old-school Hollywood feel to it. The interior of the building is almost Spanish-inspired, featuring tiled floors and whitewashed walls. There were also some more colorful accents in the old space, which Henderson says she kept in the redesign.

“For instance, we played with the blue tile in the fireplace accent-wise,” she says. “I think I intuitively wanted more color. I needed to add color to my life.”

The multicolored decor was a challenge for Henderson, whose previous space was largely neutral and simple. Working with Murphy, she created a space more indicative of her current perspective.

“Before, the beige was very attractive and pleasant but it didn’t feel quite like me,” says Henderson. “What I like about this space now is that everything has a little more of a story to it, which is scary in some ways because it’s more personal, but it also makes it more interesting.”

One area where this rings true is thegallery wallwhich turned out to be a favorite of Henderson’s. “I feel like a [%1704%] is one of those things you see on Pinterest all the time, and you always want to do it,” she says. “The cool thing about the gallery space is that it’s personal; each piece of the art represents something to me.”

When working with a rental, personalization is key to making the space feel less like a temporary residence and more like a real home. One way Murphy did this is by flipping the living and dining rooms to create a layout that made more sense for Henderson.

But Henderson’s top tip for personalizing a rental?

“Removable wallpaper!” she says. “I didn’t know about it before and it’s amazing—I haven’t taken it off yet so I might change my mind, but it helped. Not sticking to the white walls that make you feel like you’re going to have to move is a good way to make [a rental]more interesting. I learned you don’t have to commit to one style or one color palette, and it can still be cohesive.”

See more home before & after stories: