Get their small-space decorating tips too! 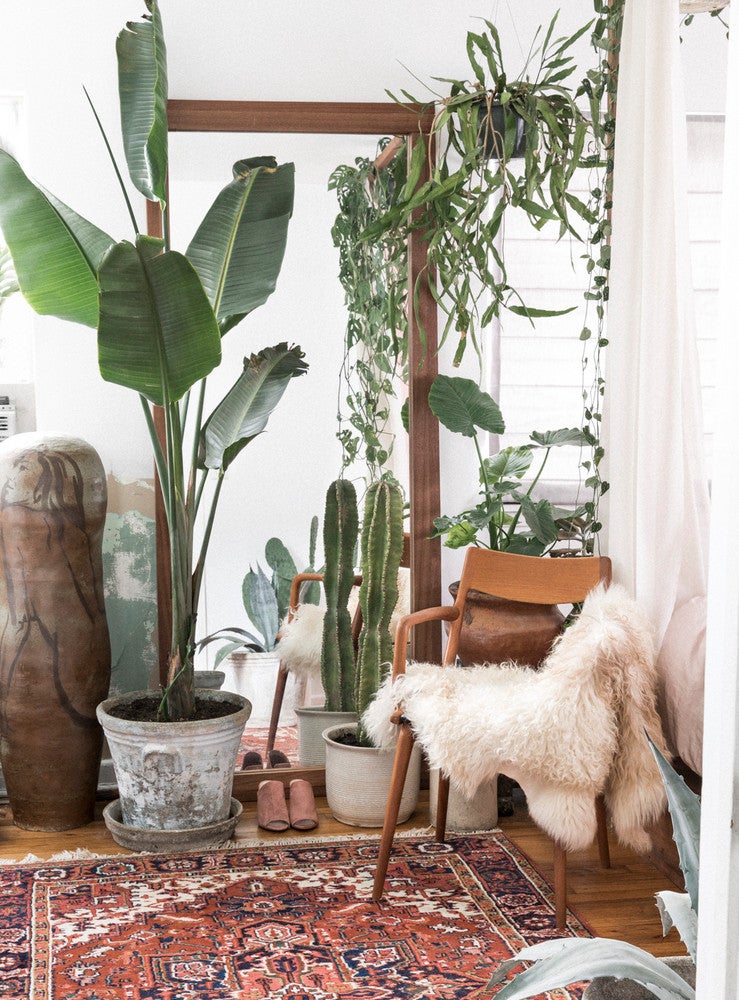 If there was ever proof that a small space doesn’t have to mean sacrificing style, Chelsae Sahlman’s apartment would be it.

“We’ve lived here for three years now and when we first moved in, we weren’t planning to stay,” says Sahlman of the 650-square-foot home she shares with husband Evan. “We basically used it as a storage unit for all the chairs my husband was racking up. Eventually we bought an actual storage unit and decided to enjoy our space. Now we’re so happy here!”

Originally meant as a short-term rental after the couple’s marriage, the space has since been transformed into a calm and uber chic oasis Sahlman describes as “modern meets the eccentric romantic.” The one bedroom apartment was built in the 1920s and still had original wood floors and a decent layout. A few personalized touches and a lot of planning later, and the couple is in no rush to leave any time soon.

To avoid the impersonal feeling of living in a rental, they made small updates to maximize their space and have it be reflective of their personal taste. For example, the kitchen—once an unattractive corner with laminated fixtures—became a cozy nook with a few easy additions.

“My husband found these slabs of slate and marble, so we took off one of the countertops and replaced it with slate. Where you see the marble, there was nothing there: It was just an air conditioning unit!” says Sahlman of the kitchen renovation. “None of the shelving was there either.”

According to Sahlman, the biggest thing that transformed their rental into a space that felt more like a permanent home was adding extra storage. Not only does this provide the obvious organizational benefits, but things like

in the kitchen and a full-on shelf wall in the living room (a long-time design dream of Sahlman’s) gave the couple a chance to display some sentimental mementos. The mugs hanging in the kitchen were bespoke from their wedding, and Sahlman’s husband made all the pottery on display in the kitchen.

In this image: Anthropologie Perasima Bowl in “Pink”, $18

Actually, most of the art throughout the apartment was created by either Sahlman (a photographer) or her husband (an artist). “I studied film and art and he studied studio art,” says Sahlman of how the artistic duo’s creative background helped them design the apartment. “When you’re studying art you have to learn about the basics, from the Renaissance up to now. It gives you an understanding about what is beautiful and why people are drawn to it.”

This would explain the carefully-curated shelf wall in the living room, expertly arranged to exude an eclectic yet sophisticated vibe, and the dreamy color palette. While the couple originally favored a totally neutral color scheme, they slowly started adding pops of pink. That aesthetic has become an unintentional signature of sorts for both Sahlman and her husband; she filters her photography with a slightly pink tint and he has started incorporating the shade into his paintings.

Also of note in the home: The gorgeous mix of furniture. The apartment is conveniently situated within walking distance of West Palm Beach’s Antique Row, and Sahlman says the area’s thrifting is second to none—ideal for hunting down unique pieces at unbeatable prices.

“Palm Beach is a wealthy area and they rotate their furniture like clothing. It’s the best thrifting you’ll ever find; a lot of the pieces we have, like our awesome chairs and coffee table, we found thrifting,” says Sahlman. “My husband has an amazing eye for furniture. He found Kofod Larsen original midcentury chairs for $15! They don’t know what they have.”

Thrifting has led to a real mashup of pieces throughout the home, lending an almost maximalist feel to the tiny space. While many small-space dwellers might shy away from bolder decor for fear of crowding the area, this 650-square-foot apartment is proof that you can do it right.

“Contain the maximalism to one area, and balance it out somewhere else in the room so it’s not overwhelming,” advises Sahlman on how to tackle maximalism in a smaller space. “For example, the other side of our shelf wall only has one abstract black and white painting—I feel like that kind of gives you a place of rest. Sticking with a color palette helps too!”

To further make the most of her small space, Sahlman suggests decorating vertically. “So if you have ceiling height as opposed to square footage, use that to your advantage,” she says.

One area this advice rings true is in the couple’s bedroom, where a four-poster bed (a design bucket list item for Sahlman) makes the space feel grander since it draws the eye upwards. The bed, which was actually made by her husband, ended up being one of Sahlman’s favorite parts of the whole apartment.

Another favorite part of the home? The stunning array of plants in every room of the house, from windowsill succulents to larger floor plants to leafy strands adorning the canopy of the bed. And yes, all of them are real.

“We got our obsession with plants from our friend who is so passionate about them. We’d go on plant hunting trips together and buy a truck load of plants to bring back—it just kind of evolved from that,” says Sahlman. “As a photographer, I spend so much time inside because when I’m not shooting, I’m editing, so I love that the plants give a sense of life to the space.”

Want to see more of Chelsae’s work? Visit her site at chelsaeanne.com and be sure to follow her on Instagram.