A light and airy apartment that's all about making the most of a small space. 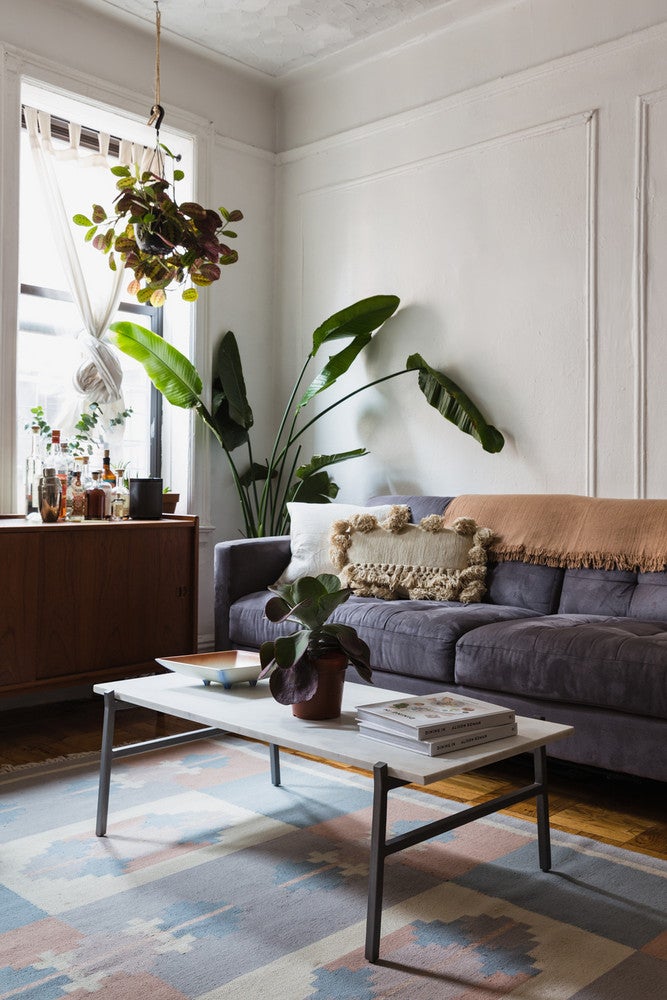 Alison Roman’s inaugural cookbook Dining In has been making serious strides since its release late last fall. The writer, cook, and freshly minted author is based in Brooklyn, in a 670-square-foot light-filled apartment, situated two blocks from the iconic Prospect Park. Surrounding herself with items bearing sentimental value is a core element of Roman’s design philosophy. Plants, books, crystals, and items collected from her travels adorn her cozy home, which bears a minimalist aesthetic riddled with color and natural accents.

One look and you’ll notice the pleasantly overwhelming array of potted greens scattered throughout the home. It’s no secret that they bring Roman joy, her affinity for plants is well-apparent as is her intention to transform her home into a livable greenhouse. “I always try to have fresh flowers, or in this case, fresh eucalyptus since it was in season (and makes my whole apartment smell amazing).”

As to how she manages to keep them alive? A watering schedule prompted by the plants (yes, really), mini rotations, and tours throughout her apartment are a handful of Roman’s methods. And while her living room doesn’t actually get too much light—one of the primary reasons why she opted to fill her space with greens in the first place—electing low-light plants was key. “My secret is…that I’ve killed a lot of plants in my quest to find ones that will work in the room with low light. So, once I find the ones that do work, I can ask the people at the plant store (I get most of mine at Natty Garden on Washington in Brooklyn, The Sill in the LES or the Union Square Greenmarket) which are similar to those.”

Those who live in a small space know all too well the perils of entertaining in tights quarters. Roman doesn’t see it quite as so. “My entertaining philosophy is that I don’t call it entertaining, I call it having people over. Taking the word out of the equation goes a long way in making me and the people I invite over feel more comfortable. It’s relaxed, it’s easy, it’s low stakes. Come over, have some food, drink some wine, it’ll be great.”

The most challenging aspect, as for most, is finding space to accommodate guests. In which case, Roman has a clever solution: “ If the number of people exceeds the number of chairs I have, I do things stand-up dinner party style. People cram onto the couch (which is maybe too big for the space, but whatever), sit on the floor, etc. Nobody seems to mind.”

As one can come to expect, a fully-stocked kitchen is an integral accessory to Roman’s space. “I have about 47 bags of flour, three boxes of kosher salt, spices I never use (I should throw those out), bags of rice I’ll never cook and four hundred jars of honey, maple syrup and agave (why do I have so much agave?). I have everything always,” says Roman. “The things I run out of most are the most

As to how she manages to keep her space organized with said abundance of culinary essentials—be it a hyperbole, or not—Roman has her friend, Emily Fleishaker, founder of KitchenFly to thank. “She came into my kitchen and really had her work cut out for her, but to be honest, I’m working on so many different things at one time, I find it impossible to stay organized. That, and…I am not an organized person.”

Roman’s beautifully designed entry nook is yet another example of her instinctive style, although she asserts it’s anything but curated. It features an early 19th century drafting table Roman bought on a whim online, about six years ago. It functions as an oversized catchall for everything from keys and mail, to art and books. The latter of the four being a clever alternative to stacking titles on a coffee table: displaying them as wall art instead.

And while Roman fears that the table no longer fits her aesthetic, it’s an item she just can’t bear to part with. “It has so much good energy, I think it’ll be with me forever, even if it’s always just kind of lurking in a nook somewhere. Also, it was expensive. So.”

Roman’s charming home boasts no frills, instead adopting a comfortable and airy aesthetic, one she refers to as messy, at times. Take for example her self-dubbed “vaguely color-coordinated” bookshelf unintentionally curated to complement her visually-inclined memory. “When I inevitably forget the name of whatever book I’m looking for, for whatever reason I remember the color of the cover and can think ‘I know it has a light blue spine with black font…’ and search that way.”

Roman’s favorite spot in her home? It’s all about the airy and bright bedroom. “The best is in the spring, early summer or fall when it’s not too cold and not too warm and I open all the windows and WFB (work from bed). There is nothing to obstruct the view or sun or air and it feels like I’m staying in a hotel. I love it.”

Roman, who has another book in the works is also starting a newsletter, while continuing to write for various other publications. “There are a bunch more things, but I don’t want to jinx anything just yet. It’s going to be an amazing year, I’m so excited.”