How a Family of Four Lives Comfortably in 650 Square Feet 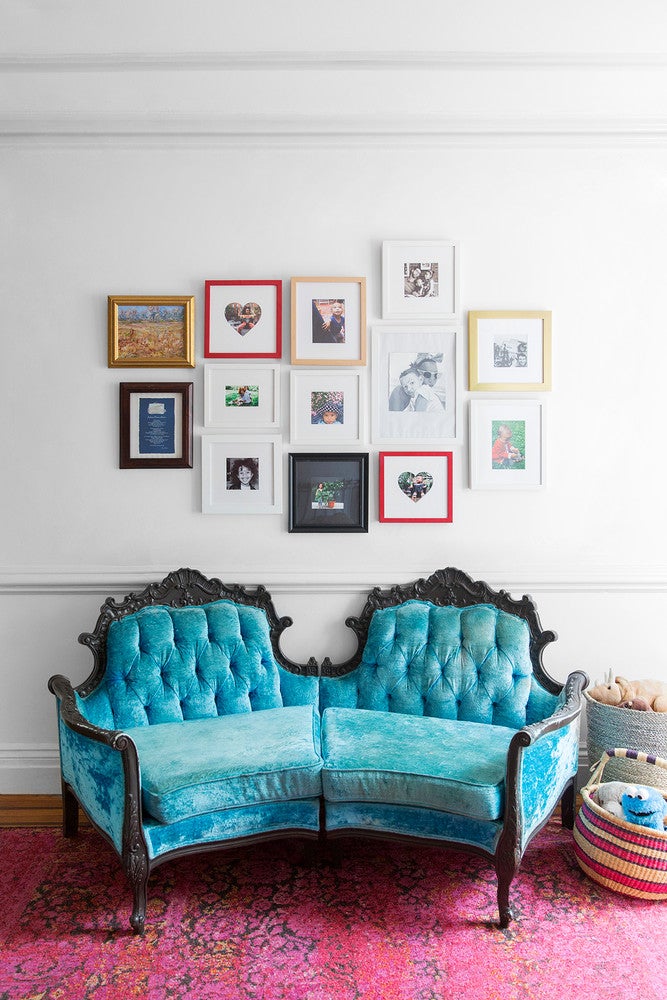 Small space living is a challenge. And to make it look good? That’s another story. Especially when containing the chaos that young children create. But if anyone can do it, it’s Brooklyn-based writer and stylist LaTonya Yvette.

She pens honest, inspiring, and relatable posts about motherhood, design, and other creative pursuits on her blog, while her Instagram showcases her enviable style and gives a peek at her Brooklyn home: a one-bedroom apartment on the border of Clinton Hill and Fort Greene that she shares with her husband Peter and their two children.

Fitting a family of four into 650 square feet may seem like the ultimate challenge, but as a native New Yorker, Yvette is used to living in small spaces. With a few creative additions, they were able to turn the ground floor unit—major bonus: they have a private garden—into a faux two-bedroom, creating privacy for both she and her husband and give the kids their own space.

The apartment is technically a one bedroom, but location was more important than size when they were apartment hunting a year ago. “We were really looking for something within a few blocks radius of our old place,” Yvette says. “At the time of our move, the pickings were slim and the competition was crazy.”

A yard was a priority, as was the ground floor. “We have two noisy little ones,” says Yvette. “I grew up in New York, so a one bedroom doesn’t really scare me as much as living above someone and having them complain about all the tantrums and stomping and scooting done indoors. You learn to pick your battles.”

To make the one-bedroom work for their family, they had a fake wall built as a divider. The company who constructed it suggested that they not go all the way to the ceiling since the building’s walls are old, so there was a large gap at the top that Yvette turned into a mini garden.

“I had this idea of a living wall, to help bring some life in the room without the window,” she says, “and though the plants haven’t grown that much since, I still love the way the light leaks through living things into a living space.”

The kids’ room features a mini living room setup, with a beautiful tufted sofa that Yvette snagged from her neighbor. “They were having a stoop sale and gave it to us for free,” she says. “I grew up with my grandma always digging through the latest vintage furniture finds and asking my uncle or someone to go haul a dresser she spotted a few blocks away to her second floor railroad apartment.”

Initially, they had the couch in the living room, but after a revamp of the kids room, they realized it worked better in there as far as style and function. “I love watching my kids play,” says Yvette, and the sofa gives her a comfortable perch in their room. “It felt like a natural extension of what my belief of home is.”

A gallery wall that Yvette created after she worked on a project with Framebridge hangs above the sofa. “Peter is a photographer and camera operator, so we take a lot of photos of the kids in their various stages of life,” she says. “I always wanted to display their moments in their room, so that they can look back and possibly strike up some of the memories.”

On another wall, there’s a gallery-turned-inspirational mood board create with the kids’ own artwork. “River is now in school and Oak is in pre-school, so their bags are always stuffed with creations,” says Yvette. “River really wants to be an artist when she grows up.”

After reading about Jean-Michel Basquiat and learning that his artwork was displayed even as a young kid, Yvette was inspired to display River’s work. “It really resonated with me and her intense love of art,” she says. “She doesn’t play with toys, she just creates. She’s concentrated and passionate and really believes in herself. And Oak loves to mimic her, so it only felt right to create this art wall for these budding artists I’m raising.”

It can be hard to keep a small space from becoming overwhelmed with stuff, but Yvette keeps shopping to a minimum and enforces a “purge and replace process” to minimize clutter.

“If both of the kids toy baskets are full to the max, they can not bring a new toy home,” she explains. “They have to go through and put one on the stoop for another kid to enjoy if they’d like something new.” Instead of complaining, the kids are practically Marie Kondos-in-training.

“If we happen to get something from a party, they also know that’s the process,” she says. “If they can’t think of anything they want to get rid of for this new thing, chances are, the kids find out they actually don’t really like the new crappy thing, and will ask me to just get rid of it after a day or so. There’s no pressure, it’s just the way they’re used to us keeping our stuff down.”

Yvette follows the same rules for clothes or shoes, so it’s easy for them to understand. Even still, she admits that it’s not as ordered as it may seem. “Most days, I feel really unorganized, to the point I feel like I can’t function in the space until I rearrange a cabinet,” she says, “but it’s mostly my OCD. Ha!”

Tiny kitchens are always a challenge, but to make theirs feel more open, Yvette took the doors off of both of the cabinets. “I’m honestly not sure if it worked, but by the time I removed them and Peter painted over some sections, it was too late to go back to original.” Rest assured: the cabinets look great.

The living room came together naturally when they reconfigured the space. The L-shaped came from a friend, and its placement turned the corner nook into a perfect workspace, even though Yvette says the desk wasn’t given much thought. “It was in the kids room when Peter and I had that room,” she says, “and then we realized we couldn’t leave it in there as we rearranged the space. So we just needed it to go somewhere, anywhere, where it wasn’t obstructing the flow of the room.”

As for the accent wall, Yvette wanted a color that would infuse “the island feeling” (“I have always been drawn to a more Caribbean-based lifestyle: color, plants, warmth”) that she strives for in her home. “The room needed something, anything.” she says. “I was already maxed out on plants, which is my usual go-to for adding oomph to a room.”

Since the space is small, the color also needed to be light and contribute to a feeling of openness. “Also, it just so happens, it’s a great accent for gold, which is my other go-to,” says Yvette.

Ground floor apartments can suffer from being too dark, but quality lighting was important when searching for an apartment. “Peter is kind of a lighting master, and I am really picky on lighting. It’s the same way I need to have lots of plants and a garden; it has everything to do with my mood and the way I see an apartment being a comfortable living environment.”

They didn’t change any of the fixtures, but they added additional lights to dark corners. “We also did some extensive research on light bulbs and which kinds are energy efficient, and which ones deliver the most natural feeling light,” she says.

After visiting a few apartments, the garden is what sealed the deal for Yvette and her family. “I just wanted to be somewhere where I could wake up and take in the air, feet to the ground, and let the kids just be kids right away.” They frequently host friends and entertain outside, and it’s a treat for the kids.

“The backyard is an extension of the apartment,” she says. “We treat it as another living space. We aren’t confined to the 600+ square feet. If the kids get a little chaotic, we literally open the door and let them run out. It feels safe and grounding at the same time. And it’s rare as New Yorkers.”

300 Square Feet (And How a NYC Editor Makes the Most of It!) This Small Los Angeles Home Packs a Girly Glam Punch
7 Genius Hacks For Small Outdoor Spaces