This Happy Home Will Make You Smile

Afraid of pops of pink, bright blue, and bold green in your home? This New York-based Creative Director shows us how to pull it off with flying colors. 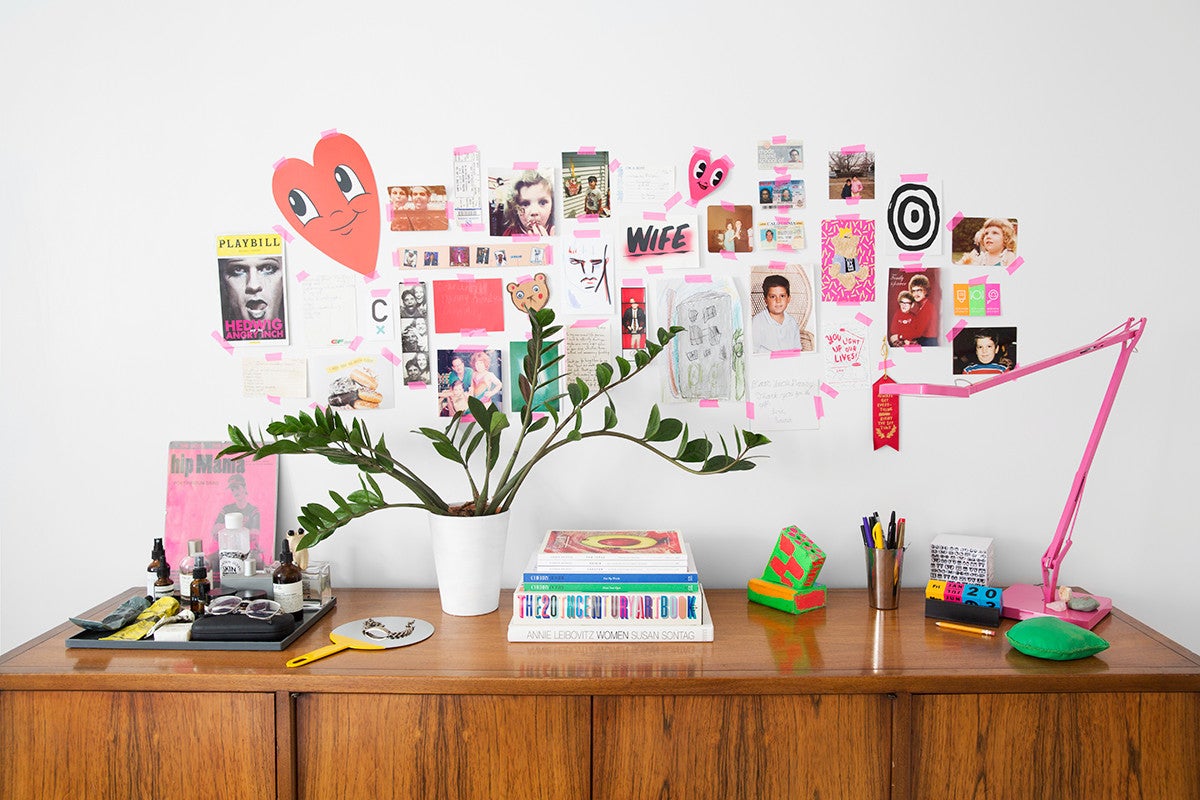 Dan Pelosi isn’t timid when it comes to bringing bright hues into his Brooklyn apartment. In fact, his collection of color is exactly what his guests respond to the minute they walk inside. “My home isn’t about pop color, it’s about pop neutrals,” he explains. “Which is also the name of my boy band.”

In case it wasn’t obvious, Dan Pelosi’s personality is just as striking as the bold hues in every room of his Brooklyn home. His colorful space was a happy accident. A collector of things, from artwork from friends to a bookcase of serving pieces, Pelosi insists his colors come from years of bringing in things he loves to his home, not intentionally setting out to add pops of bright hues.

“I’m in the ‘more is more’ camp with color,” he says. “It’s not overwhelming, but I love the general combinations of colors that don’t make sense. When you start piling them on top they create a broader spectrum.”

Before moving into this space, Pelosi never dreamed he’d leave the prime location of his West Village abode. “I told myself that if I ever left, it’d be for a brownstone where I could entertain and go from a living to a dining area.” His request to the interior decorating Gods were eventually answered in the form of his sunlit, three-bedroom in Bed-Stuy.

A serious chef and entertainer, Pelosi grew up in an Italian and Portuguese household where dinners were where everyone came together and often took over an entire day. It was a tradition that bored him growing up, but eventually became one he celebrated as he learned to cook. He wanted a space that could accommodate lengthy meals and at least twelve people in one spot- a hefty ask for a New York City space.

The dining room table was made from his own design and can seat around 14 guests cozily. His dinner party guest list is a mix of friends from different parts of his life, which is key for keeping the conversations interesting at his parties. The other hodgepodge at his table is Pelosi’s collection of chairs, which each represent a different period of his life. “I got the green chairs from a garage sale in San Francisco, the blue chairs from a project I did with Gap,” he says. “They all speak to different stages of my life, which I love.”

Most of the colorful pieces throughout the apartment have been collected over years and years. A graduate of Rhode Island School of Design, Pelosi has been trading and buying art since his time as a student and most of the artwork in his home are from good friends and artists he has followed for years.

A separate living area also meets his needs when it comes to entertaining. There’s enough seating for up to 12 friends for movie nights. Rather than use one bright rug to anchor the space, Pelosi chose to layer several in order to make the area more cozy and less precious.

the mantle was intentionally left blank in order to break up the art-filled walls on either side. “Plus, the architecture around the fireplace was so pretty, I wanted it to speak for itself,” he says. Though the mantel usually rotates favorites, a ceramic butt sculpture by friend and artist Ben Medansky and a plaster pair of tighty whitey’s by former RISD roommate and artist Philip Iosca hold court next to a painting from a childhood friend’s daughter.

The brown leather couch was a purchase from Restoration Hardware specifically for this space. Most of the pillows and throws are from textile designer Caroline Hurley, a close friend he met in college. Most of the stools in this space and along the kitchen island are by designer Eric Trine who he met while living in Portland. Pelosi’s knack for collecting extends to his circle of artistic friends too.

His penchant for holding onto cherished items is most evident in the guest room. The quilt is one his Mother made for him before he went off to college. (“It was the first thing I ever art directed!”) and a piece of art from Shara Hughes hangs above the bed.

In his own room, much of the design decisions came down to a gut feeling. After ditching a proper bed, he moved his mattress to the floor which helped make everything else in the space feel more grounded. The room achieves a perfectly undone balance with just-right wrinkly linens and a plethora of greenery that helps block out early morning light.

The credenza in his room is constantly evolving with photos, images or pieces that are currently inspiring him. “I spend lots of time at home and I love to play around with moving things and redoing the mantel whenever possible,” he says.

Although most of the color throughout his home comes from artwork and collections, the bathroom walls are a blushing pink. Pelosi, a retail creative director, borrowed the color while working on launching the Lou & Grey store in Manhattan. “It’s the color they painted all the dressing rooms,” he explains. “When you wake up in the morning and look in the mirror, you’re actually glowing.”

The most important tip Pelosi can offer anyone that’s afraid of color is to just start bringing in items you love and worry less about how it will work in the space. “It’s not in my apartment unless it’s a favorite thing,” he says. A mantra we should all decorate by.