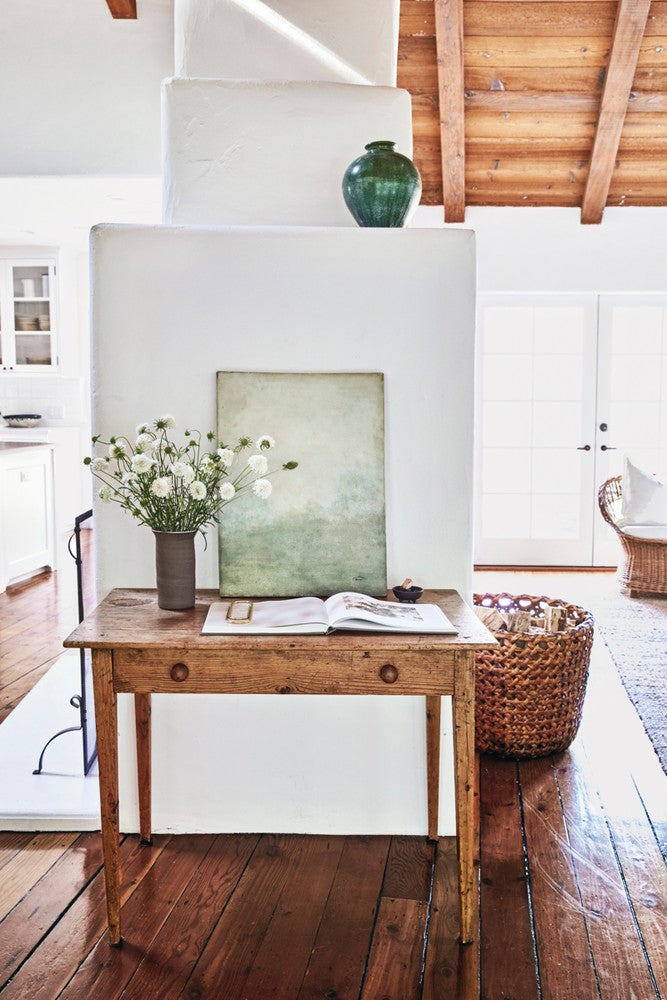 Creating carefully constructed spaces that bring a character to life (and make Pinterest dreams come true) is something of a natural instinct for Hallie Meyers-Shyer. The 30-year-old daughter of directors Charles Shyer (Baby Boom, Father of the Bride) and Nancy Meyers (Something’s Gotta Give, The Holiday, It’s Complicated)—also known for her aspirational interiors—took a cue from her parents when working on her debut film.

Out September 8, Home Again stars Reese Witherspoon as Alice, an interior designer and separated mother of two who moves to Los Angeles with her kids to live in her late father’s house. “I was excited to direct a story about family and relationships,” says Meyers-Shyer of the script she also wrote and that Witherspoon was attached to early on.

There’s no shortage of decor envy in the romantic comedy, which was mostly shot in a 1920s Spanish-style home in Brentwood. Set decorator Nicole Cates (a Roman & Williams alum) worked with production designer Ellen Brill to create the interiors using a pink and orange palette. They made sure everything down to the kitchen appliances looked like items Alice would own.

Getting all those details right was paramount for Meyers-Shyer. “We shot in a real house, and it was important to make it looked lived-in. I wanted Alice’s space to have a California bohemian feel, with color and pattern,” she says. “We added tile decals to the kitchen to make it pop visually and put out lots of food. Your home reflects your character in every way, and it should on film as well.”

She was just as particular about finding the perfect setting in her own life. Two years ago, Meyers-Shyer and her boyfriend, tech entrepreneur Ophir Tanz, along with their collie-mix rescue pup, Indy, moved into a mid-century Spanish-style house in Benedict Canyon.

“We were looking for a year,” she says. “Nothing felt right for our first place together, and then I found this 1954 one-story hacienda with a cool layout and mystical vibe. It reminded me of the house I grew up in and also Georgia O’Keeffe’s desert home, which I’ve always loved.”

Blending the couple’s two styles took some negotiation. His leans toward mid-century modern, while hers is more earthy and cozy. What they settled on was a refined-meets-rustic look, with exposed wood beams, skylights, textured stucco walls, and a soft neutral color palette. (Axel Vervoordt, Atelier AM, and Rose Uniacke were frequent sources of inspiration.)

Meyers-Shyer and Tanz wanted to honor the hacienda’s clean lines—dramatic arches and hidden nooks, as well as the double-sided fireplace between the dining and living rooms, a favorite design element—while making some modern updates, like renovating the bathrooms and opening up the kitchen, where they kept the adobe walls and brought in handmade white square tiles and ceramic pendant lamps.

Family friend and designer Mark D. Sikes (who consulted on Home Again) offered a decor blueprint. “The house has some odd spaces, so there wasn’t an obvious plan,” explains the director. “I asked Mark to help me draw out what should go where.”

She and Tanz looked to favorite stores Nickey Kehoe, Garde, deKor & Co., and John Derian for much of the furniture and accessories, and commissioned local designer Chad Hagerman to custom-make the wood dining room table with an iron base. Layered throughout is an eclectic mix of objects and textiles collected from the couple’s far-flung travels, including a suzani wall hanging and rugs sourced from Morocco. Like a true director, Meyers-Shyer prefers lived-in spaces and vintage pieces with a story behind them. “It was important to me that everything wasn’t brand-new,” she says.

[In this image: Pieces by friends are peppered throughout, including a drawing in the bathroom by Carly Jo Morgan. Vintage Barro Negro Vases from Oaxaca, Mexico; Painting Carly Jo Morgan.]

Of course, a few standout items were scored from her film’s set, like a Meridith Baer foyer table and an abstract painting in warm orange and yellow tones by Catherine Booker Jones. The finishing touches came from her parents, who both live nearby—vintage lamps and upholstered French Deco chairs from her mom; photography and art from her dad.

In a life-imitates-art moment, Meyers-Shyer found the real challenge was being patient with the process. “I had to realize that a home takes time,” she says. “It’s okay to just be chill and let your life develop.”

3 Cues on Creating your Picture-Perfect Home

“Pinterest was an amazing way for us to communicate” says Meyers-Shyer of planning the look of the film set with production designer Ellen Brill and set decorator Nicole Cates. For her own home, she curated “a very specific board for every room” to envision how the hacienda would come together.

Though her style leans more minimal and neutral, Meyers-Shyer considers Alice’s home “like my alter ego’s house,” playing with a pink and orange palette. “In set design, more is more,” says the director. “Color looks better on film, so you want to fill your backgrounds with richness and texture.”

“My mother’s films have amazing attention to detail in every way, from plot structure to design,” says Meyers-Shyer. “Audiences love being in the world of her movies, but it’s the warmth and relatability of the story and characters that really bring you in. The aesthetics just accentuate that.”