These A-List properties are giving us major summer vibes. 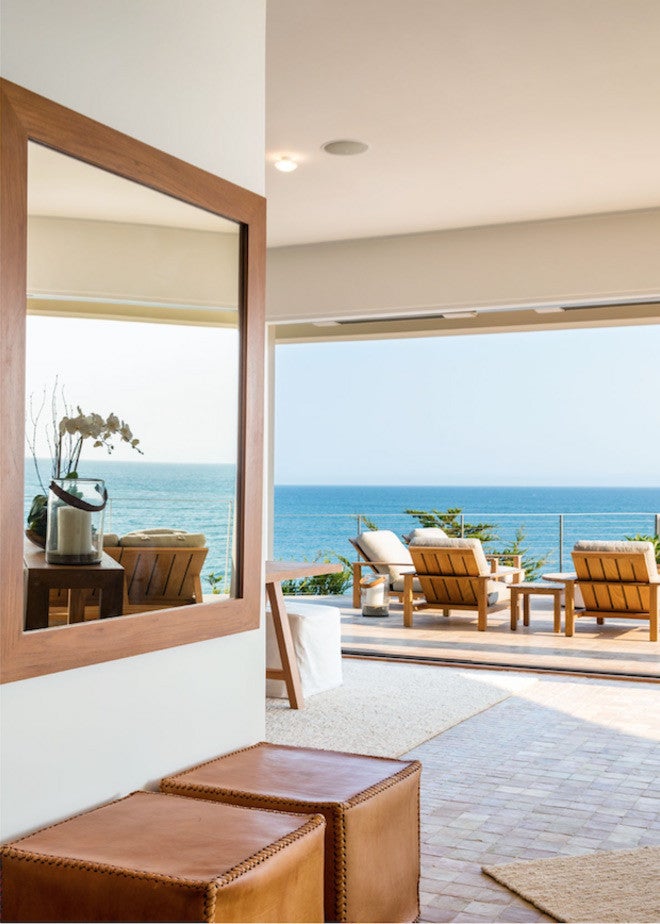 Summer is officially here and what better time to flood your newsfeed with gorgeous celebrity oceanfront estates than now? These dreamy beachside properties offer up tons of inspo—or at least something to daydream about from behind our desks. From a mansion in Miami, surrounded by ocean frontage, to a private island in the Bahamas, here are ten of the most beautiful celeb beachfront residences that we’ve ever seen.

Of course Cindy Crawford had a beach house fit for a supermodel. In 2015, the fashion icon (and hubby Rande Gerber) listed a whopping $60 million estate sprawled across three acres of the Encinal Bluffs in Malibu. Along with ocean views in every single room, the Mediterranean-style mansion boasts an insane wraparound terrace overlooking the water, as well as a private path to the beach.

We’ve said it before and we’ll say it again: Natalie Portman is living the dream. Case in point, the actress just scooped up a nearly 4,000-square-foot estate nestled on 10 acres of ultra lush—and super private—waterfront land. Along with an open indoor-outdoor layout that makes it feel like you’re practically living on the water, the SoCal property boasts floor-to ceiling windows in nearly every room that overlook the Pacific Ocean and the beach.

Turns out that esteemed actor (and art collector) Leonardo DiCaprio is also a fan of breezy beachside real estate. Way back in 1998—right after he filmed “Titanic”—the Oscar-winner picked up a multi-million-dollar bachelor pad on the beach in Malibu. Along with floor-to-ceiling oceans views in nearly every room, the property also features a humongous glass-railed patio designed exclusively for al fresco dining, plus a private stairway that leads directly to Carbon Beach.

Nestled on a private stretch of seaside land in the Hamptons, fashion designer Stella McCartney’s beachfront cottage is truly the stuff of design dreams. Along with ocean vistas in every room and three sets of sliding glass doors, the waterfront residence boasts an enormous patio deck that runs the full width of the house and offers sweeping views of the Napeague Bay.

Featuring 30-foot-tall domed ceilings, an indoor mezzanine, and, of course, amazing artwork, Pharrell’s former mansion in Miami has given us a lot of eye candy to drool over. However, the real visual feast is the estate’s insane rooftop patio deck, which features a geometric-shaped swimming pool and spa that looks directly out to the Atlantic Ocean.

Never mind that Naomi Watts and Live Schreiber didn’t make it as a couple—their former superior real estate investments are forever etched in our hearts. Take for instance the charming cottage the pair picked last summer in Montauk. Along with a flagstone terrace and an ocean-facing master suite (with a private veranda), the place is filled with sleek Palladian windows overlooking the surrounding beach.

We all know rapper Lil Wayne loves to stunt, and his real estate portfolio bears no exception. Last year, Weezy listed his Miami waterfront mansion for $12 million, and the whole world got a glimpse of his truly wild taste, including a rooftop skate park, indoor shark pool, and of course, crazy ocean views. We’d expect nothing less from a cash money millionaire such as Carter.

Robert Downey Jr. has a lot to celebrate these days. Along with the windmill—yes, windmill—property he recently purchased in East Hampton, the actor also scooped up a $3.8 million dollar residence in Malibu overlooking the Malibu Lagoon. Complete with ocean views in almost every room, a glass-walled living room, and a massive outdoor deck, this waterside estate is truly fit for a superhero.

Back in the more sugary-sweet, pre-Lemonade days, Jay Z was rumored to have dropped over $3 million on a secluded Caribbean island as a gift to his then-pregnant (with Blue Ivy) bride, Beyonce. Located on a 12.5-acre stretch of land surrounded by the Atlantic Ocean, the tropical paradise has provided the couple with some much-needed down time, privacy, and most importantly, family photos for IG.

Taylor Swift is no stranger to stellar real estate, and her mansion off the coast of Rhode Island is no exception. Along with ten bathrooms, eight bedrooms, and a sparkling swimming pool, the $17.75M estate includes 700 feet of private shoreline and seven miles of secluded sandy beaches—offering up uninterrupted views of Fishers Island Sound and Little Narragansett Bay. No wonder Swift and her squad have celebrated so many Fourth-of-Julys (and Thanksgivings) at the place.