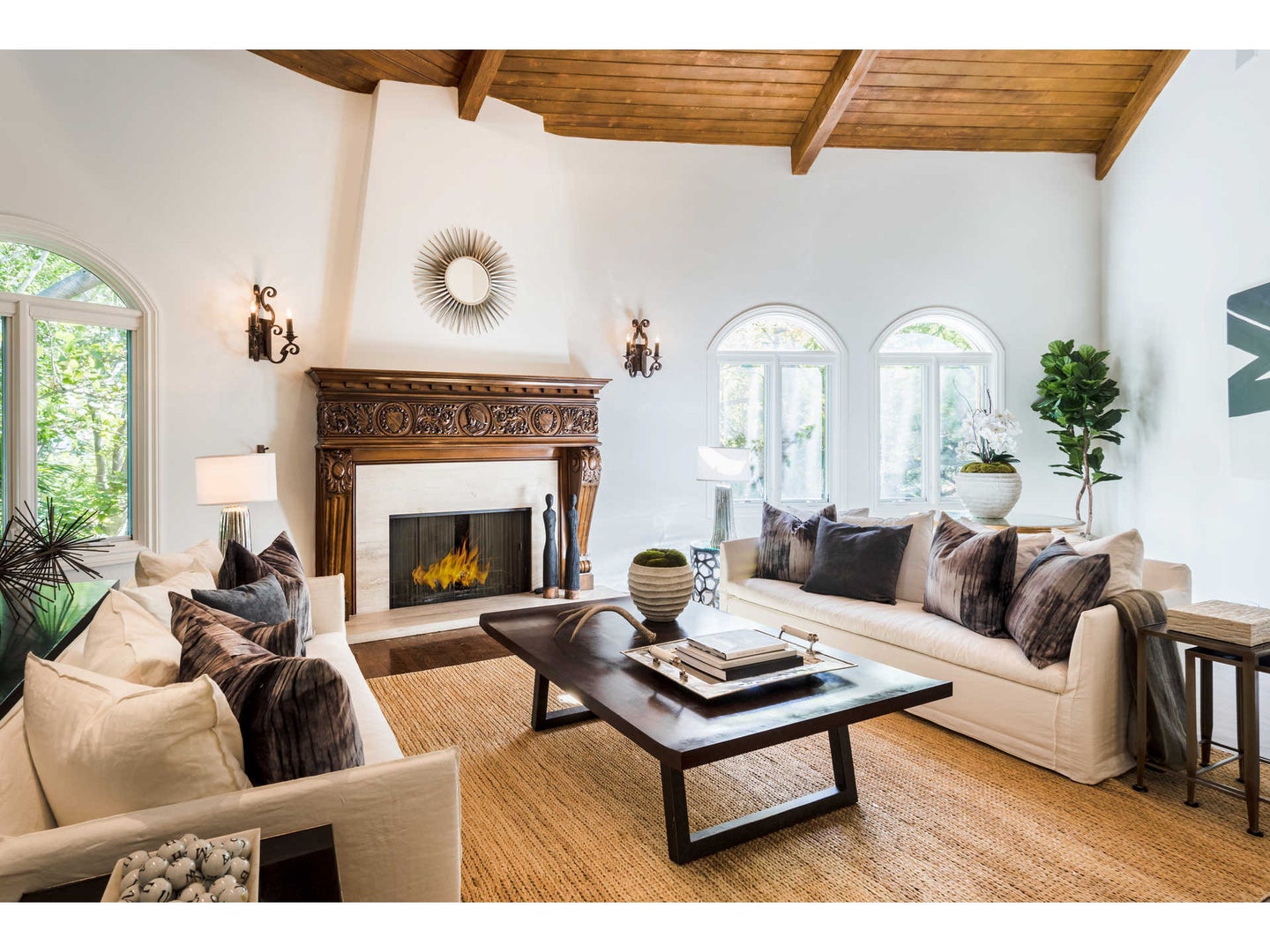 courtesy of The Agency

You know what they say: One celebrity’s trash is another celebrity’s treasure. Okay, that might not be the exact phrasing, but that’s certainly the case for Jurassic World star, Chris Pratt, and funny-lady-turned-pro-podcaster, Anna Faris. According to Variety, the former power couple has listed their secluded Sunset Strip home, following the announcement of their divorce in fall. While they have no plans of sticking around, their soon-to-be-ex $5 million mansion is primed for the ultimate staycation.

We first began to suspect Pratt and Faris had a secret infatuation with resort-worthy estates when they listed their equally serene Hollywood Hills property this past January. With a backyard to rival that of a 5-star retreat in Waikiki, the $2.5 million mid-century pad channeled the bliss of a permanent vacation.

This just-listed mansion, however, takes a stronger international stance. Complete with soaring wood-beamed ceilings, chalky stucco walls, a salt water pool, and championship-sized tennis court, the Mediterranean-style home might as well be nestled amongst the hills of Tuscany.

Not unlike the dramatic front entrance and foyer, old world charm takes the lead in the formal living room where wood-beamed ceilings, wrought iron sconces, and an intricately carved mantel introduce a rustic touch to an otherwise cookie-cutter space. Exuding the same warmth of a cozy ski lodge high in the Alps, the large sitting room is primed for chilly LA nights.

No makeshift resort would feel complete without a proper watering hole. For impromptu drinks and star-studded parties, potential homeowners can retreat to the den. Blurring the lines between a luxury hotel bar and stately library, the cozy oak paneling that covers the entire room elevates the space from a standard in-house wet bar to a personal hole in the wall.

Just off the gourmet chef’s kitchen sits the formal dining room—a space which not only boasts enough room for a generously sized table, but a projection system. Privy to the same round top windows that grace the rest of the home, the sun-drenched dining room is a fitting space for considerable statement pieces, like large-scale art or a bold area rug.

While the upstairs master suite includes dual walk-in dressing rooms, a spa-like bath with steam shower, and private balcony, amenities take on new meaning outside. Complete with a saltwater swimming pool, dining and barbecue area, and fire pit, the primary backyard space is what outdoor living dreams are made of.

Not pictured? On the other side of those soaring hedges awaits a full-size tennis court, gym, massage center, and open-air pavilion (how else do you expect a guardian of the galaxy to stay in universe-saving shape?) An abundance of lush greenery and sky-high leaves help to keep pesky paparazzi at bay—because no A-lister (or Z-lister) wants nosey neighbors crashing their staycation.

The listing is currently represented by Natasha Barrett and Billy Rose of The Agency.

Will This Finally Be Ellen Degeneres’s Forever Home?

Kristen Wiig Loves Mid-Century Design as Much as You Do