Warning: The actress’ dreamy new villa will leave you green with envy. 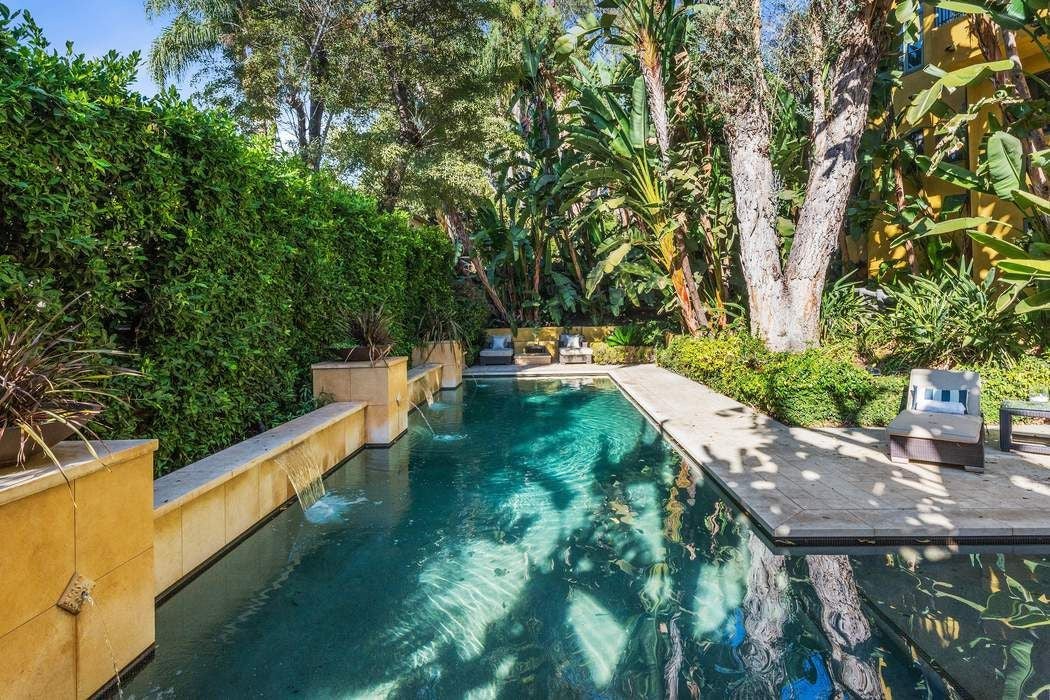 When you’re a celebrity looking to put down roots alongside fellow A-listers, there’s really no place like the star-studded streets of

. Tucked away in the Los Feliz neighborhood of LA, the exclusive area is home to a slew of celebs including Natalie Portman, Kristen Bell, Jason Segel, and Ashley Benson; now, American Horror Story star and Domino gal pal Emma Roberts is joining them.

According to Variety, the 27-year-old actress just snagged a stunning Mediterranean-inspired villa in the coveted community for a cool $4.02 million. And with a second Nor’easter currently slamming the East Coast, Roberts’ brand new digs have us craving a tropical oasis of our own.

Built in the 1920s, the charming three-story estate may at first appear unassuming from the street, but just beyond the front entrance awaits a backyard worthy of a five-star resort. While it’s definitely an idyllic spot to perfect that sought-after summer glow, the lush grounds also double as a secret haven for the self-professed bibliophile to catch up on her favorite reads (Roberts founded the digital book club Belletrist with her friend Karah Preiss just last year).

Clearly, the actress had staycation on the brain when she made this pricey purchase.

On the home’s main level, a walk-in wet bar, family room, and fully-equipped second kitchen open up to the tree-shaded backyard that gives off serious jungle vibes. The L-shaped swimming pool and massive patio sit adjacent to a series of terraced gardens and stone pathways.

Jealous yet? Join the club.

Sky-high ceilings, dark walnut floors, and custom mahogany built-ins are just a few original design features that remain consistent throughout the 3,800-square-foot three bedroom home. Taking full advantage of the abundance of greenery outside, large glass windows and French doors border the main living space, introducing not only a refreshing breeze to the home, but much-needed color too.

Of course, no true SoCal abode would be complete without a terrace. And while it’s easy to picture Roberts sipping on her morning coffee (book in hand) beneath the comfort of the awning in the warmer months, the enormous stone fireplace—an impressive focal point in the formal living room—was made for getting cozy on cool California nights.

Dinner and a view? We’re here for Roberts’ light-filled dining room. Well-suited for any decorating scheme, the charming space serves as the perfect blank canvas for the stylish hostess. Considering Roberts is somewhat of an entertaining pro herself (the Nerve actress welcomed guests at the Domino Hamptons pop-up last summer), we’re confident she’ll use the intimate space to its full potential.

In addition to the three generous bedrooms and two full, updated bathrooms, the villa boasts a number of other bonus spaces for work and play, including a den, a media room, and an office. There’s a separate two-car garage outside for extra storage, too.

The spacious master suite, which overlooks the perfectly manicured grounds, comes with not one but TWO walk-in closets. It’s no secret we have a thing for dreamy built-ins, so suffice it to say that Roberts’ next-level sleeping nook is definitely going on our inspo list.