The actor’s luxe abode is an idyllic mix of grit and opulence. 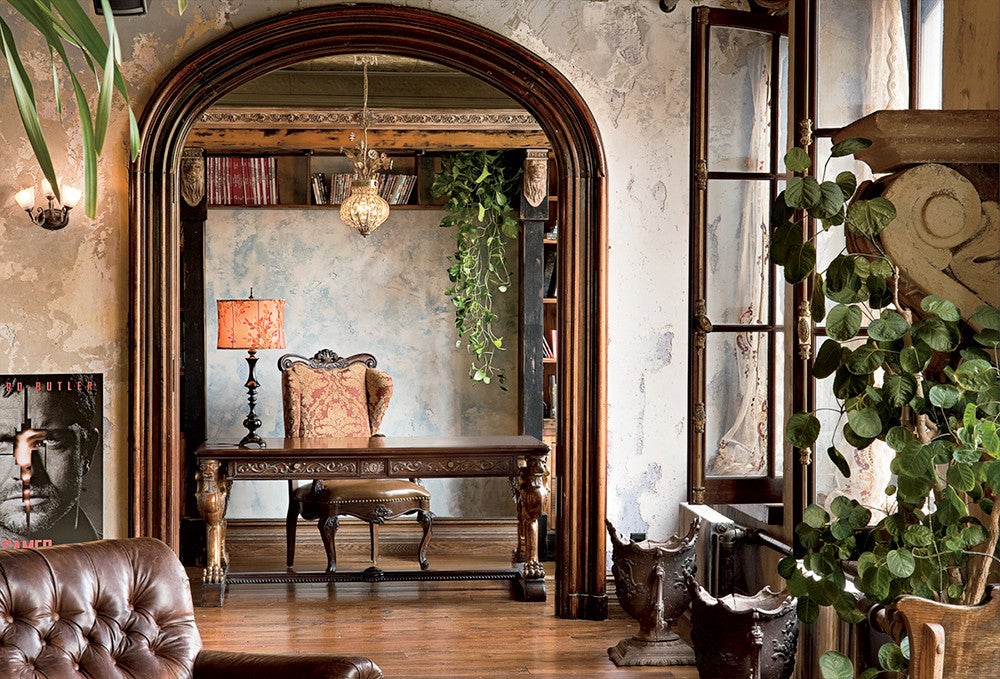 When you hear the words “bachelor pad,” antique stone tiles, Renaissance-inspired frescoes, and vintage crystal chandeliers are probably not the first design features you’d imagine. But for renowned actor and dreamy Scotsman Gerard Butler, those details were exactly what he had in mind when he first moved into his just-listed Chelsea duplex. The star’s artful pad—which, per Variety, has just hit the market for $5.995 million—is riddled with antique finds and old world architectural details that give the two-bedroom abode its unique, rustic character.

“It’s really a work of art. It’s the only way I can describe it,” says Kevin Sneddon, the listing agent for the property. “It’s probably the coolest New York City apartment I’ve ever been in, and I’ve been in real estate for a long time.”

Once a manufacturing warehouse in the early 20th century, Butler’s low-rise building along West 19th Street now houses a collection of boutique apartments. According to Variety, the P.S. I Love You actor snagged the spacious loft in 2004 for $2.575 million, and called upon architect Alexander Gorlin and Hollywood-based set designer Elvis Restaino to turn the bare bones pad into the likes of a chic chateau. The result? A home that is as handsome as the star himself.

Perhaps inspired by the neighborhood’s plethora of art galleries that flood the streets below, the 300 star’s lavish loft serves as a prime example of how to masterfully balance modern and vintage. Carved mahogany doors open up to the main entrance gallery—where a ceiling fresco looms overhead—and antique stone tiles lead into the main dining and living space. The apartment’s exposed stone and brick walls provide the perfect contrast to Butler’s contemporary art collection. Likewise, an abundance of greenery helps bring a sense of newness to the home.

And just because Butler’s busy profession often calls him out of town, that doesn’t mean the actor didn’t play a major role in the apartment’s redesign—which took four long years. “Every decision was a painstaking decision. His fingerprints are on every square inch of that place,” Sneddon tells Domino. “Whether it was taking time to source the material or trial and error—in terms of the different textures on the walls or colors—[the apartment] just speaks volumes of my client, who’s basically an artist.”

A pristine place to feast, the A-lister’s sturdy dining table is crafted from wood and iron, and sits under a gathering of vintage crystal chandeliers. Wide plank floors, 13-foot high wood ceilings, and carved wood columns can be found throughout the main level, which encompasses a quaint office, small guest room, laundry room, and one of the home’s two bathrooms.

A home theatre sits at the core of the main floor—and is, of course, decked out with an enormous drop down movie screen. The elegant viewing room, where we can only guess Butler has spent countless hours previewing his own performances, is framed by a pair of carved wood columns imported from India, a wooden arch sourced from a cathedral in the Bronx, and a lion’s head crafted from limestone.

One thing that’s not quite like the others? The modern cookhouse. While the kitchen’s barn wood cabinetry and stone backsplash help connect the room to those adjacent, the space comes fully equipped with a slew of sleek appliances.

Butler’s generous master bedroom, ensuite, and dressing room occupy the whole of the second floor. A private, 1,200-square-foot terrace can also be accessed from upstairs.

While the actor’s pricey spread is, of course, fit for art lovers and film buffs, foodies might also want to consider checking out the extravagant loft. Considering renowned restaurateur Will Guidara and Christina Tosi, chef and owner of Momofuku Milk Bar, also live in the building, there’s sure to be no shortage of dinners worth bragging about.