Jason Biggs’ Trendy Tribeca Loft Was Once a Spice Warehouse

The comedian and his wife just sold their space for $2.66 million. 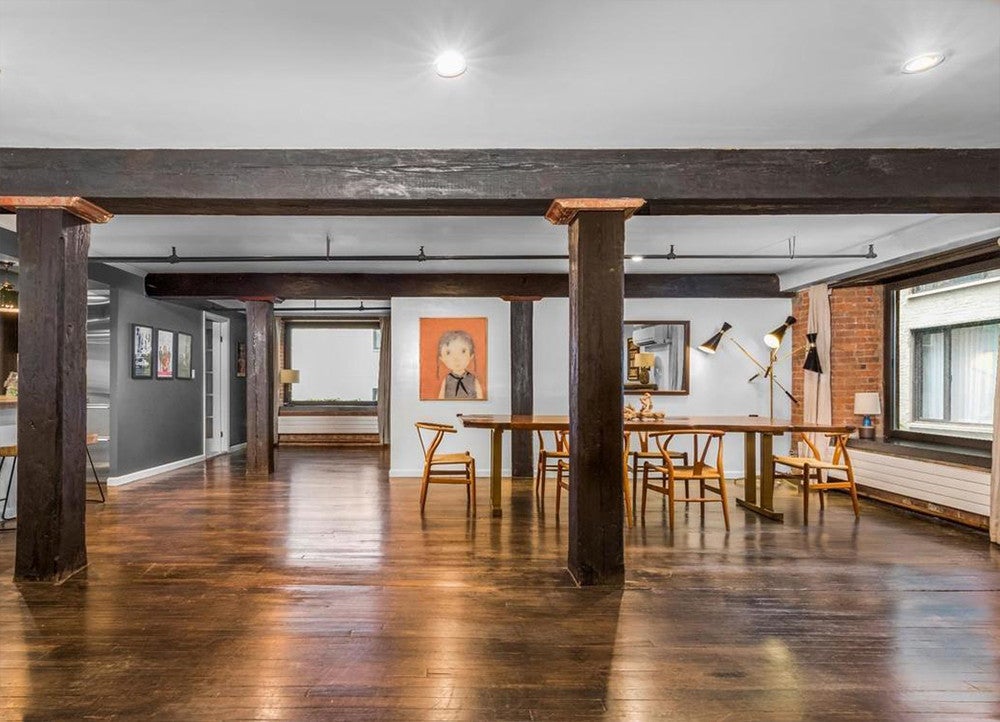 If you’ve ever walked the ultra-hip cobblestone streets of Manhattan’s Tribeca neighborhood, you know it’s one of the most coveted spots in the city. Who wouldn’t want to live in a charming old industrial building that’s been converted into a chic residential loft? According to Variety, Jason Biggs: The American Pie star just parted with his posh 3-bedroom loft for $2.66 million.

Biggs and his comedic writer-actress wife Jenny Mollen had initially put the apartment on the market back in February 2017 with an asking price of $2.99 million. And though the final selling price ended up being a bit lower, it’s still a marginal profit on the $2.55 million the couple bought it for back in 2013.    Located on the fourth floor of the eight-story Medium Lipstick building, the 2,200-square-foot apartment features cozy exposed brick walls, raw pipes, and dark oak wood flooring that are characteristic of many New York lofts. Though the building dates back to the 1860s, the apartment boasts all new amenities—even soundproof windows to keep out the racket coming from the busy West Side Highway adjacent to the building.

Historically used as an old spice warehouse, the Medium Lipstick building is now home to 16 boutique units. Biggs’ features a massive open floor plan, where the kitchen flows into the dining area and living room to create one beautiful space. The floor plan is more than 40 feet long at its widest point—a rarity in generally cramped New York City housing—and provides ample room for comfortable living.

An island countertop of poured concrete gives the space an industrial feel that matches the building and separates the compact kitchen from the entertaining space. Stainless steel appliances, custom cabinetry,

The home’s aesthetic was dreamed up by celebrity interior designer and longtime friend of Biggs and Mollen, Cliff Fong. Inspired by the space’s rustic exposed beams and brick walls, Fong said in a Popsugar interview that he balanced those elements out with lots of strong, masculine colors and finishes.

Speaking of those rustic elements, original timber beams (like the one in the below image) run the entire length of the apartment and bring a sense of old school charm to the space. The exposed washed brick walls make the living area seem especially cozy, a feeling which is only amplified by the real wood burning fireplace—another truly rare find in the city.

Oversized single pane windows provide lots of natural light throughout the loft space, particularly in the bedrooms. The large master bedroom is almost always sunny thanks to light reflecting off the nearby Hudson river. And while we don’t know if the furnishings in the listing photos are indicative of Biggs and Mollen’s actual decor, the natural woven chairs and vintage-looking rug warm up the room and bring in textural contrast to the more industrial architecture of the loft.

The apartment also features a den that can easily be transformed into an extra bedroom, as well as an additional proper bedroom once belonging to the couple’s son Sid. Though after welcoming their second son Lazlo in October, Biggs and Mollen are already settling in to a new place with more bedrooms in the nearby West Village.

Of the home’s two bathrooms, the master ensuite is the more impressive. Featuring a spectacular glass-enclosed steam shower lined with marble tiles and a marble-topped double-sink vanity, the bathroom also has a large window that allows tons of natural light to stream through.

Perhaps the best part of it all is the postcard vista provided by the terrace, which spans over 1,000 square feet and is accessible for all building members. Panoramic skyline views surround the landscaped roof garden.