Does the name Zaha Hadid ring a bell? 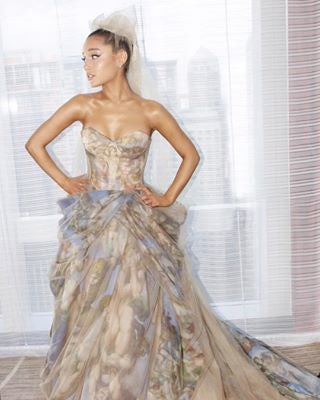 ICYMI, Ariana Grande is living in the moment. Just days after her alleged engagement to SNL star—and beau of a few weeks—Pete Davidson hit the news, the A-list duo is apparently moving in together.

According to StreetEasy, the 20-something pop star and Davidson are rumored to have snagged a spot in an iconic building by the late and great architect Zaha Hadid in NYC’s Chelsea neighborhood. While it’d be tempting to pose questions about the duo’s apparent whirlwind romance, at this point, the only thing we’re concerned about is Grande’s stellar taste in architecture.

While it’s still unclear whether the No Tears Left To Cry singer and her to-be hubby have paid in full for the $16-million unit or are simply renting the luxe pad, we couldn’t love their choice harder if we tried.

Seeing that the ultra-mod kitchen comes fully decked out with double dishwashers, double refrigerators, a steam oven, and Gaggenau appliances, we’re going to go out on a limb and guess that the Nickelodeon alum is not only a secret design buff, but also a chef at heart.

Ten-foot high ceilings and custom lacquered wall-paneling are a constant feature throughout the pair’s palatial, pre-marital pad. The apartment encompasses four bedrooms (with room for a fifth), all of which boast en-suite baths. Though Davidson’s family is only a stone’s throw away (the comedian is a Staten Island native), at least Grande’s future in-laws now have an extra spot to crash whenever they visit Manhattan.

The lovebirds’ new nest also boasts a giant walk-in dressing room, private service entrance, and utility room—bonus perks that any busy celebrity power couple would be sure to make use of.

With only 39 residences available, we have to give the duo major props for snagging a spot at this exclusive property. Zaha Hadid bragging rights aside, the building’s top-notch amenities—which include perks like an IMAX theatre, 75-foot sunlight-infused swimming pool, reservable spa suite, and full-time concierge—place this sweet stay in a league of its own.