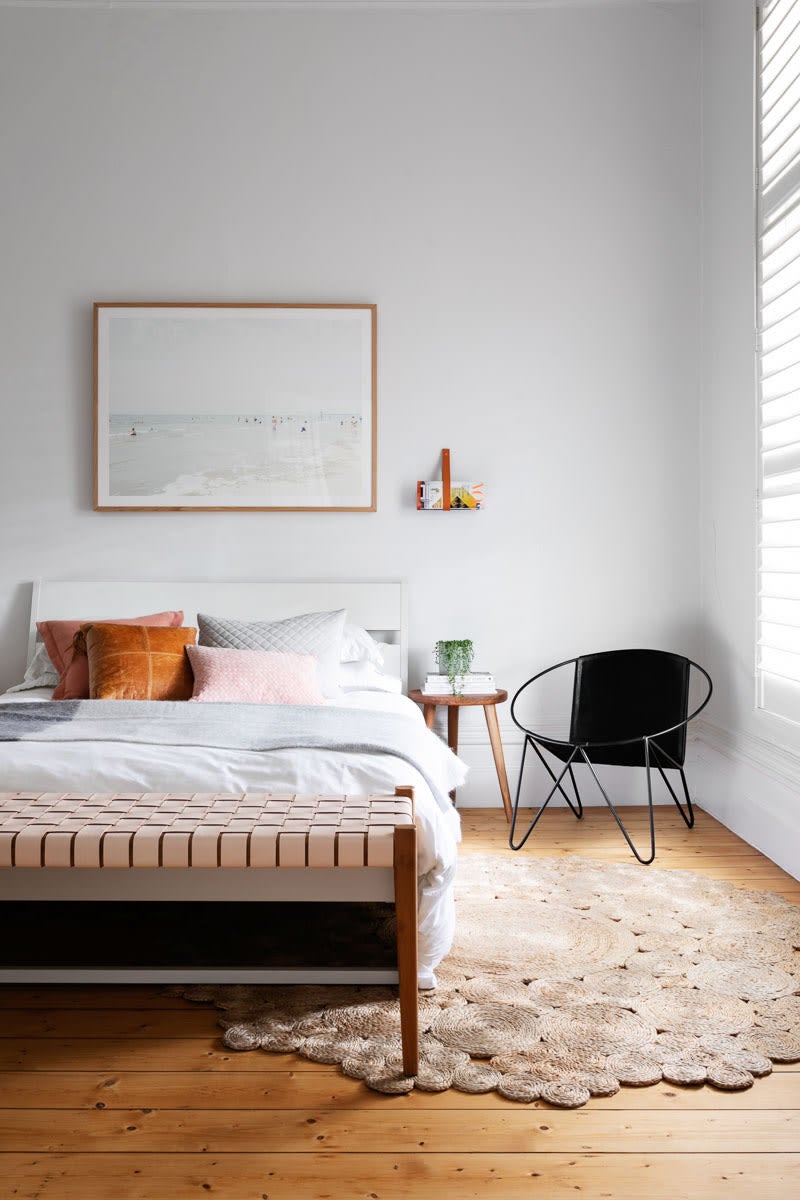 Try as we might, we can’t seem to get Marie Kondo’s voice out of our head. “Does it spark joy?” we repeatedly ask ourselves while struggling to decide whether or not a pearlescent soap dish brings us happiness. Spoiler alert: It does. As simple and silly as Kondo’s signature decluttering motto may seem, she’s not wrong.

In the wake of minimalism and extreme organizing shows, it’s easy to get caught up in the pursuit to purge. Contrary to popular belief, paring down your home to the essentials is not about emptying out your space: It’s about making the most of what you love (and repurposing or donating the things you don’t). One of the most important places to reassess the necessities is in the bedroom.

If you’ve happened to accumulate a trove of “just okay” belongings over the years, we’re here to help you pare down. Because living with less doesn’t just save you space—it also clears your mind. Not to mention, it’s a feel-good opportunity to give tired objects a new life with a new owner. Read on for nine things your bedroom doesn’t need for a good night’s sleep.

This tip doesn’t just apply to minuscule studio apartments and singles. Relegating your bedside belongings to one streamlined table top will open up a world of opportunities for the other side of the room. Need music to help you fall asleep? Park your record player in the empty nook. Want to purify your personal paradise? Take a page out of designer Mel Burstin’s book and make room for a towering plant.

The Pro: With less surface room to work with, you might even feel tempted to keep your phone further away from the bed and replace it with fresh flowers instead.

Piling on a mountain of throw pillows is one of the easiest ways to make a bed or sofa feel homey, but it can also become a decorating crutch if you aren’t careful. In lieu of an assortment of cushions that you sort of like, pick one strong piece that you want to be the star of your slumber. Samantha Litt topped off her serene Brooklyn bedroom with a neutral lumbar pillow.

The Pro: You’ll never be late to an important work meeting again because it took you too long to make the bed.

Floor mirrors have the power to brighten up a space, but they also have the power to soak up precious square footage. Instead of supersizing your morning selfie capabilities, opt for a more modest option that will change the way you feel about the top of your dresser. Geneva Vanderzeil’s bohemian bedroom has us reflecting on downsizing.

The Pro: Some of our favorite mirrors—including Ben and Aja Blanc’s fringe Equus Mirror—happen to hang on the wall.

They say that three’s a crowd, but the same can also ring true for one. A bulky lamp that takes up more than half of the table is doing your nighttime routine a disservice. Switch things up by embracing a new light source, like an aromatic candle or a plug-in sconce that frees up space for books and other must-have treasures. We’re partial to the sleek gold sconce that hangs in Paul Denoly and Nick Blaine’s 18th-century farmhouse.

The Pro: You’ll be able to make the most of your lone nightstand with books and experiment with new ways to set the mood.

When McMansions came onto the scene in the early 2000s, having a living room in your bedroom suddenly became the norm. We’re here to put forth a new way of lounging around before hopping under the covers, and it does not include a full-size sofa and coffee table. In Barnaby Lane founder Rae Maxwell’s Melbourne home, a lone, statement chair in the corner lends a versatile touch.

The Pro: You have a last-minute spot to drop dirty clothes when you’re running out the door and can’t make it to the hamper.

A Bench at the Foot of the Bed

A bench can be a great way to bookend a bed frame, but not all stories have to have proper endings. Free up your bedroom’s sightlines by embracing negative space. In Amy Harrity’s San Francisco home, an extra-large lantern and an equally impressive trailing plant make up for any visual intrigue extraneous furniture might lend.

The Pro: So much room for activities. Kicking off your days with an early morning yoga sesh is no longer a thing of dreams.

Placing your bed directly on the floor doesn’t have to look like an accident if it wasn’t. If your space is feeling bare without a bulky bed frame, dress up the room with a fun rug or art-filled shelving.

The Pro: Friends will start to describe you as down-to-earth after you’ve snagged a peaceful night’s sleep of laying low.

It’s hard to log a restful night’s sleep when Grey’s Anatomy is blaring in the background. Spare your dresser the unsightly addition of a boring black box by turning down to fresh flowers or playful art instead. Babba C. Rivera’s zen Brooklyn bedroom makes a case for ditching the noise for decor.

The Pro: Having clear boundaries between bedtime and TV time will feel as refreshing as mastering work/life balance.

When your vanity essentials consist of nothing more than a few pairs of sunglasses and a handful of jewelry, devoting an entire piece of furniture to it hardly makes sense. Stacey Cohen’s 550-square-foot apartment makes a serious case for ditching furniture for built-ins.

The Pro: Don’t have a home office? Fake one by transforming an existing vanity into a makeshift workstation. You’ll be surprised by what a touch of paint can do.

See more stories like this: I Made a Conscious Effort to Be More Sustainable for a Week Every Minimalist Has This in Their Home 8 Minimalist Bedrooms That Would Make Marie Kondo Proud