All the Etsy Shopping Inspo You Need, Courtesy of This Brooklyn Home

How one Etsy employee filled her tranquil apartment with artisanal goods. 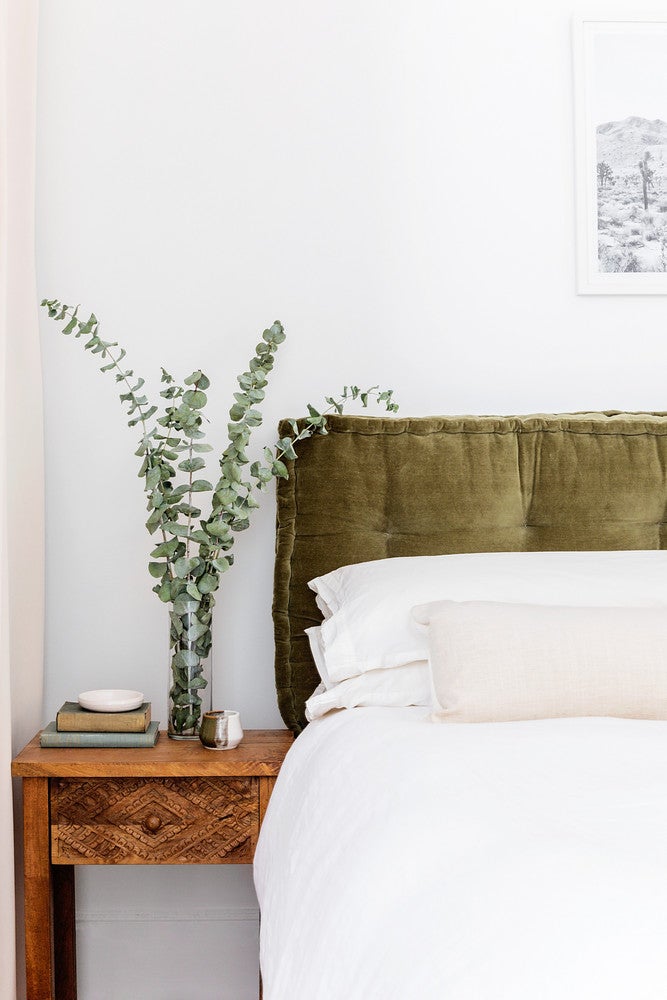 “Organic-modern” is how Samantha Litt would effortlessly sum up her whitewashed Brooklyn home. Clean, yet filled with personality; subtle, yet purposefully curated, the quiet apartment promotes ultimate serenity. But you might want to think twice before labeling it minimalist.

“I think I have a little more stuff than a minimalist would have!” laughs Litt. “I heard the term ‘organic-modern’ and that stuck with me. It’s all about making your space feel comfortable and filling it with things that make you happy.”

As a data analytics manager for Etsy, to say that she’s a pro at navigating the online marketplace would be an understatement. So when it came time for Litt and her husband, Dan, a product engineer at the kitchenware company OXO, to decorate their two-bedroom Boerum Hill abode, it only felt right to bring work home.

“I feel like all day I’m discovering new and awesome sellers, so I try to support them as much as possible,” Litt tells Domino. “A really healthy portion of our pieces are from Etsy. And, if not, we’re pretty big into DIY.”

Coming from a 300-square-foot apartment, the pair was faced with a problem most New Yorkers would feel honored to have: Finding items to fill the bonus 500-square-feet they weren’t previously privy to. Handcrafted goods and vintage-inspired pieces sourced from web-savvy artisans and makers from around the world became the secret to making the home their own.

Luckily, when the Litt and her husband first purchased the apartment back in 2016, the only changes they needed to make were purely cosmetic (the former owners were architects and had recently updated the now-bright and spacious kitchen).

“The first thing we did was have it painted. It was actually white before, but I was pretty particular about which color white,” explains Litt.

There’s no denying the sheer brilliance of going monochrome—and it’s no secret we have a thing for whitewashed schemes. But even we have to admit there’s more to the right white than first meets the eye.

“I hate myself for never writing it down!” laughs Litt about forgetting the exact shade they settled on for the walls. However, she does recall that picking a tone that fed off the abundance of natural light streaming in was key. “The first white we tried was a little too warm. The main room gets a lot of sunlight, so I wanted the flattest white possible. If anything, leaning a little toward cooler tones.”

And it’s not just the right sheen that makes all the difference, but the objects, colors, and textures that make up the rest of the room. “I figured since I was going to do the rest of the home in other very natural textures, like wood and wicker, that it would be good if the walls didn’t’ have to be so warm,” she adds.

When it came to incorporating splashes of color and personality in the living room, Litt sourced from her favorite sellers. “One thing I always use on Etsy is the favoriting functionalities,” says Litt. “You can save individual items or, at the shop level, you can save a seller if you know they make awesome stuff. Another trick to navigating Etsy is to follow people who also have really good favorites. So I always browse through theirs.”

As seasoned DIY-ers, however, the couple couldn’t resist taking on a project or two of their own. Spot that cozy maple bench in the corner? The couple crafted the polished nook themselves. “We love making stuff. He’s an engineer and understands all of the pressure points in construction. I have more of the vision. I feel like, in that way, it was a team effort.”

Litt also made the decorative pillows for both the master suite and guest bedroom herself.

“The basket was actually a gift for our wedding from a family friend that has worked with Native American artists for generations in their family,” explains Litt. “It’s a wedding basket. It’s supposed to be a rare one because it has four stripes instead of three, which is kind of cool.”

And that dreamy green velvet headboard? Consider that proof that the perfect backdrop is only a hack away. The chic piece is actually a daybed cushion from Urban Outfitters secured against the wall.

Of course, they couldn’t escape all the small space woes of living in NYC. Instead of fighting the crowded guest bedroom, Litt decided to embrace its teeny size.

“It was hard because the bed is in the corner which is not ideal in terms of decorating, but it was really the only place it could go,” says Litt. “I thought, ‘You know? If it’s going to be pushed into the corner anyway, why not make it a little nook.’”

A tiny wreath over the head of the bed and a small gallery wall stylishly single out the cozy corner, without overwhelming the space.

A graphic black and white print by Dan Hobday Art in the bathroom supported by a hinge cleverly hides the medicine cabinet.

From the kitchen lighting to the bathroom soap dish, inspired finds made for and by people who care about craft grace every surface and corner of their clam haven. So how can you be confident that whatever you’re buying online isn’t going to show up at your doorstep a hot mess? It’s all about connection.

“I think Etsy is so unique in that they’re a seller community and that they’re so responsive and available to their buyers,” she says. “Almost with every order, I end up reaching out to the seller. A lot of the time [in their about page] they’ll include why they started on Etsy, where they learned their craft, or where they source their materials. It gives you good insight into who they are as a seller and helps you trust them.”

For Litt’s go-to sellers and shops, check out her favorites page here.