Setting the Tone: At Home With the Founders of Hawkins New York

An 18th-century farm house revival you won't want to miss! 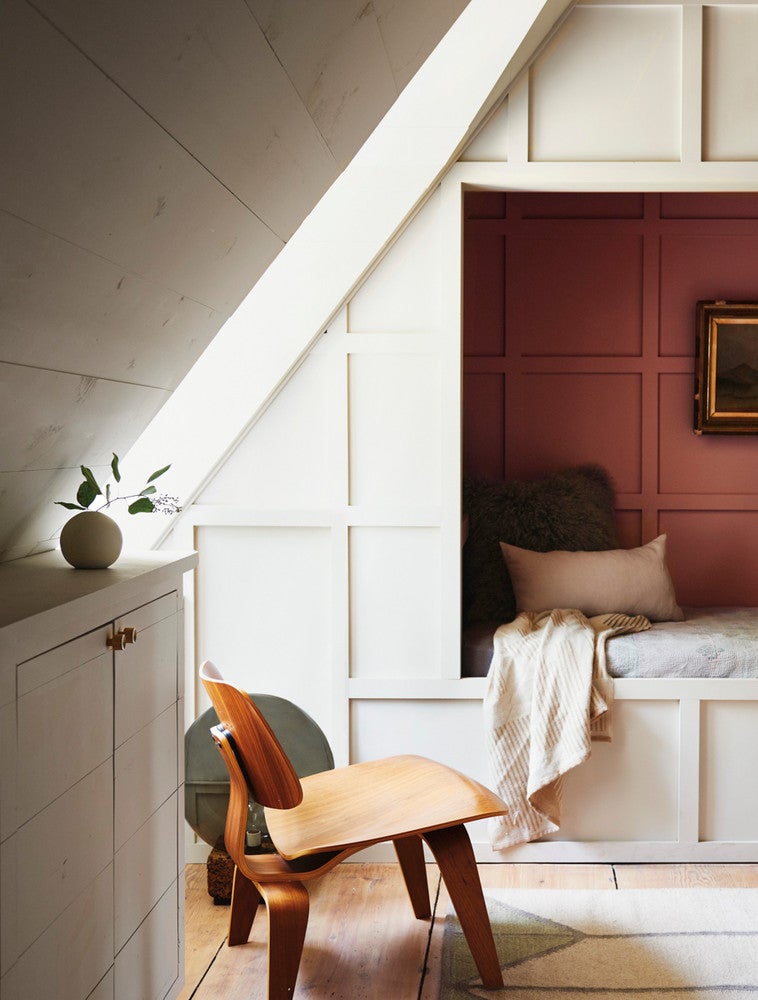 The founders of the expertly curated Hawkins New York turn their talents to reviving an 18th-century farm house—complete with a subtle pink palette.

“We’re drawn to colors that shift drastically with the light,” says Nick Blaine, cofounder of Hawkins New York along with his partner, Paul Denoly.

Paul Denoly and Nick Blaine have mastered the art of compromise.

Their home-goods store, Hawkins New York, is known for its unique balance of modernity and warmth—a marriage of the couple’s styles. “Everything in our store has been thought and fought through,” Denoly jokes of their process. “Before we lived together, my apartment looked like a Design Within Reach catalog, and Paul’s place looked like a very cool grandma lived there,” says Blaine.

Buying an upstate New York farmhouse in 2011 gave them the opportunity to truly combine and refine their aesthetic. Built in the 1750s by Dutch settlers and rumored to have been a stop on the Underground Railroad, the centuries-old property was crumbling. Denoly and Blaine worked with local craftspeople, including Claverack Builders and mason Mike Budai, to bring the house back to life, restoring the original stone structure as well as a 1901 clapboard addition. (During the renovation, they found the initials JVD on an interior wallboard— carved by the original builders, the Van Dusen family—which they preserved and have plans to frame.)

Once the bones of the place were in good order, the couple turned to the interiors. Inspired by traditional paneling in Dutch Colonials, Blaine designed a simplified modern version for the living room walls. They tested no less than six shades of pink before agreeing on the perfect hue. For the floors, they sourced tinted concrete tiles from Mexico in Hawkins’s signature palette of pinks, blue-grays, and creams. Friends came over to help lay the tiles in a random pattern, and they intentionally skipped grouting so that the edges would wear over time. “In the process of restoring the original doors, we fell in love with the years of layered paint,” says Blaine, “so we left them that way.” Other details, such as copper electrical tape around the perimeter of the kitchen walls, pair a DIY approach with a love of lived-in patinas.

Wood piles add to the living room’s rustic charm, where the couple replastered the walls and restored the original stone and brick fireplace.

An ever-evolving project, the home is a living lab for Hawkins’s collections. “We play with prototypes and test them in the house,” Blaine says. “When we launch a new color in the linen program, we move it from room to room to make sure it fits with our palette.” For their Versa Vase collection, they tried different silhouettes on the mantel, breakfast table, and coffee table, editing out any that didn’t feel like a good match. “We know something’s good when we love living with it,” says Denoly.

Blaine and Denoly made the kitchen shelves themselves from salvaged floorboards.

“Some of the ceilings are low,” says Blaine, “so we made a chair rail from brass electrical tape, painting the floors and lower wall the same dark gray to make the walls seem taller.”

Half Bushel & Peck Baskets by Peterboro Basket Company from $35 food52.com

The daybed, a family heirloom, serves as a banquette in the breakfast room, while a brass chandelier adds a touch of drama.

“We designed our own linen bedding. The flat sheet is 20 percent larger than standard, because Nick and I tend to fight over the sheets,” says Denoly with a laugh.

“Nick had the genius idea to vault the ceilings upstairs.”

Subtle pinks, from Pale Oak to Odessa Pink by Benjamin Moore, feature throughout the home.

“A lot of my personal attraction to pink comes from growing up in Mexico,” says Denoly. “It’s considered a neutral there; pink makes everyone look good.”

The Odessa Pink walls in the guest room match Hawkins’s linen bedding. “We built the palette around the concept of a textural, tonal room,” explains Denoly.

Make it all seasons

. “In spring and summer, we pair pink with flax to play up the pastel tones,” says Blaine. “In fall, mixing pink with rust, mustard, and peacock makes it feel totally different.”