This Rustic-Modern Home Is a Little Slice of California Paradise

At her home in Bolinas, an hour north of San Francisco, photographer Thayer Gowdy turned a derelict property into a serene oasis, one wood plank at a time. 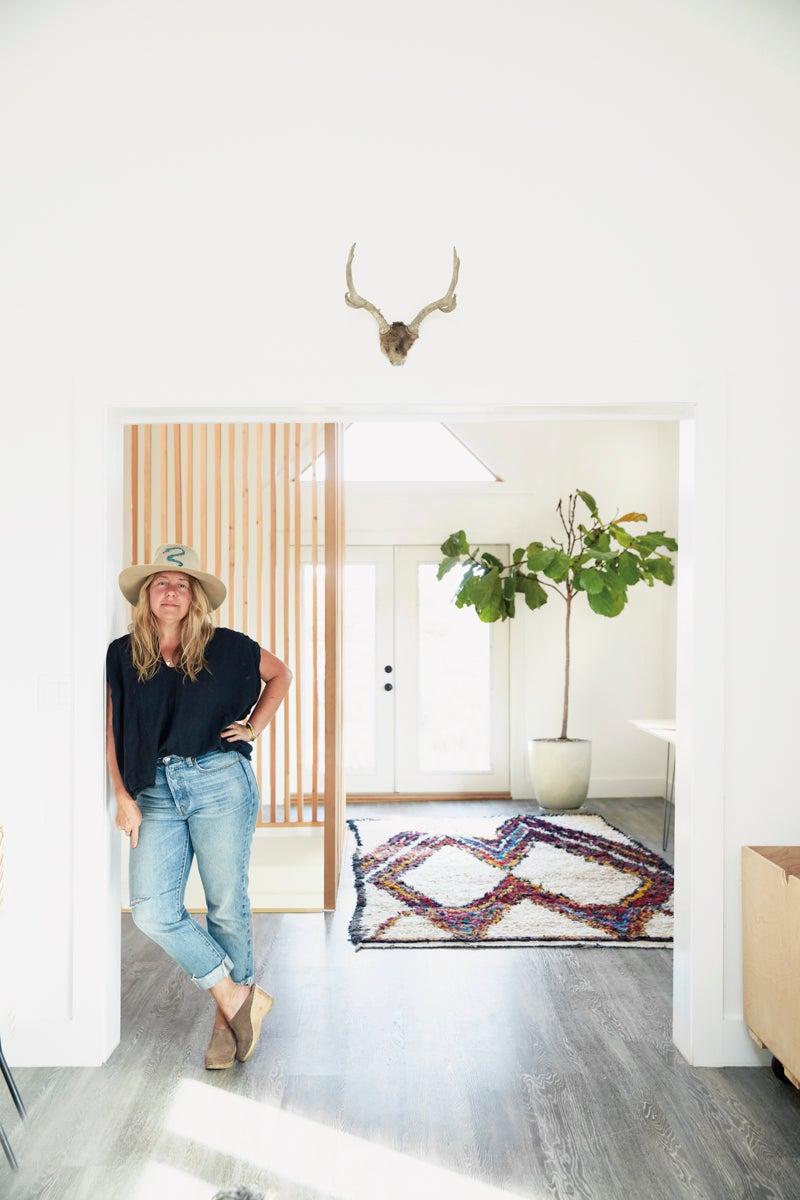 An intrepid maker, Gowdy (above) was hands-on with almost everything in the home. She designed the geometric stained-glass windows in the living area, which her father, Joe Arborio, then built in Vermont at their joint small craft business Wilderness Workshop. |Antique Hans Wegner Chair and Ottoman, Stuff SF; Fireclay Sink with Washboard, Rejuvenation, $1,299. Seth Smoot

“It was like a West Coast Grey Gardens,” says Thayer Gowdy, comparing the state of the ramshackle house she bought less than two years ago to the famously derelict Long Island mansion. What now appears as a whitewashed, loftlike oasis with a terraced yard tailor-made for parties was once “pretty much a complete teardown.” In other words, a dream come true.

For years, Gowdy—a photographer who works for brands such as True Botanicals and Vera Bradley—had a paint chip palette pinned to her refrigerator with bucket-list goals scrawled across each shade of white. “One was to sail in Turkey. Another was to have a baby. The third was to buy a house in Bolinas,” explains the Vermont native and longtime Bay Area resident. “I never had the baby, but I have the house.”

Moving to a favorite neighborhood seems a lot simpler than giving birth—however, living in the well-protected counterculture enclave that is Bolinas, a hard-core boho paradise of unpaved roads and gentle longboard waves, does require determination.

Gowdy gave up her apartment in Brooklyn, leased her house in San Francisco, took a small rental nearby (plus some storage units in Sausalito), and started a disappointing cycle of what was effectively real estate whack-a-mole, making bids on homes that would vanish to higher offers. Finally, when she happened upon a mess of a property next door to a friend’s place, she was intrigued.

“Seriously, it was so bad that no one wanted it,” she recalls. Gowdy got a private loan, then had to fix up the property in under nine months to qualify for a more traditional home loan. That’s when the hard work really began.

“This project would have felt daunting to most people in terms of a production schedule and just getting it done,” she says of her ambitious approach to DIY. “But the day I signed the papers, the tree removal guys were waiting up the street. The real estate agent was like, ‘You’re doing this now?’” Gowdy and a friend milled the wood and built a fence, a deck, and smaller pieces throughout the house. “Everybody I know helped,” she says.

The resulting space is large enough to accommodate guests (to pay back the many favors called in) and has a beautifully raw feel, with unfinished window frames and oversize rugs from Soufiane Zarib, a dealer in Marrakech, scattered around. Natural elements, like baskets and wooden pegs for storage and a 15-foot-long wooden bench in the entry, add to the beach vibes.

A hand-me-down piano and thrift-store tables mix in with modern pieces from Blu Dot, crisp Coyuchi linens, and brass hardware for a timeless look. And finishing touches, such as a beloved turntable and favorite photos by her friends and colleagues—one by Rennie Solis of the surfer-director Malloy brothers gathered around a fire, another by Magdalena Wosinska of a model wearing a bunny mask, high heels, and not much else—keep a playful edge that Gowdy is known for in her own work.

Because she also uses the home as an office and photo studio, Gowdy added a few exterior doors and created a large, open layout to allow for unfiltered natural light. She skipped window treatments in most rooms and left art off certain walls to maintain a clean white backdrop.

The casual indoor-outdoor flow, according to the photographer, is so you can “come through the back gate, drop your board, rinse off your wetsuit, and leave everything outside.” Future plans include a deck extension to connect certain areas. And the terraced garden, which Gowdy designed with low-maintenance gravel and built-in seating, is already a well-used gathering spot.

The only detail from the original structure that remains is the cast-iron tub, set outside for an open-air soak. A triangular window cut into the fence offers a sliver of a view of the Pacific. It’s an apt metaphor for the house in general. Sometimes you just need a little bit of vision to see the infinite possibilities. That plus a shocking amount of hard work to see it through to the end.

“Every house I’ve ever lived in I’ve painted the outside black and the walls white,” says Gowdy. It’s both a nod to her classic New England roots and a modern twist. When she has the time (and energy), she plans to treat each faded shingle with tinted linseed oil to make them darker. “It’s a passive way of heating your home; the black warms things up in the winter.”

“If I hadn’t produced photo shoots for the past 20 years, I never could have done this,” says Gowdy, recognizing that she’s lucky to know a host of multitalented builders through her line of work. “My friend Robert taught me to mill wood and did all my steel gates. My friend Curtis and I built the kitchen. He also makes a great cactus pear brandy!”

While the original kitchen plans included marble countertops, Gowdy’s budget determined otherwise: “You have to build the wood counters before you install marble. I liked how it looked, so I just finished with three coats of marine varnish”—a prime example of her roll-with-the-punches attitude. She makes mood boards, but tries to stay flexible. “The fun part about doing a house is being organic.”

4. Make Your Own Rules

Because the floors of the old house were so uneven, Gowdy blew her budget having them leveled and didn’t have much left over for hardwood. “I considered building a kiln so I could dry and season the planks myself,” she says, laughing. After much deliberation, she made a more practical choice: “I visited a builders-supply website and bought 4,000 square feet of vinyl plank flooring, sight unseen. It wasn’t ideal, but I like the way it looks. Since then, I’ve had friends copy it.”