A Classic California Home With a Seriously Stunning Patio 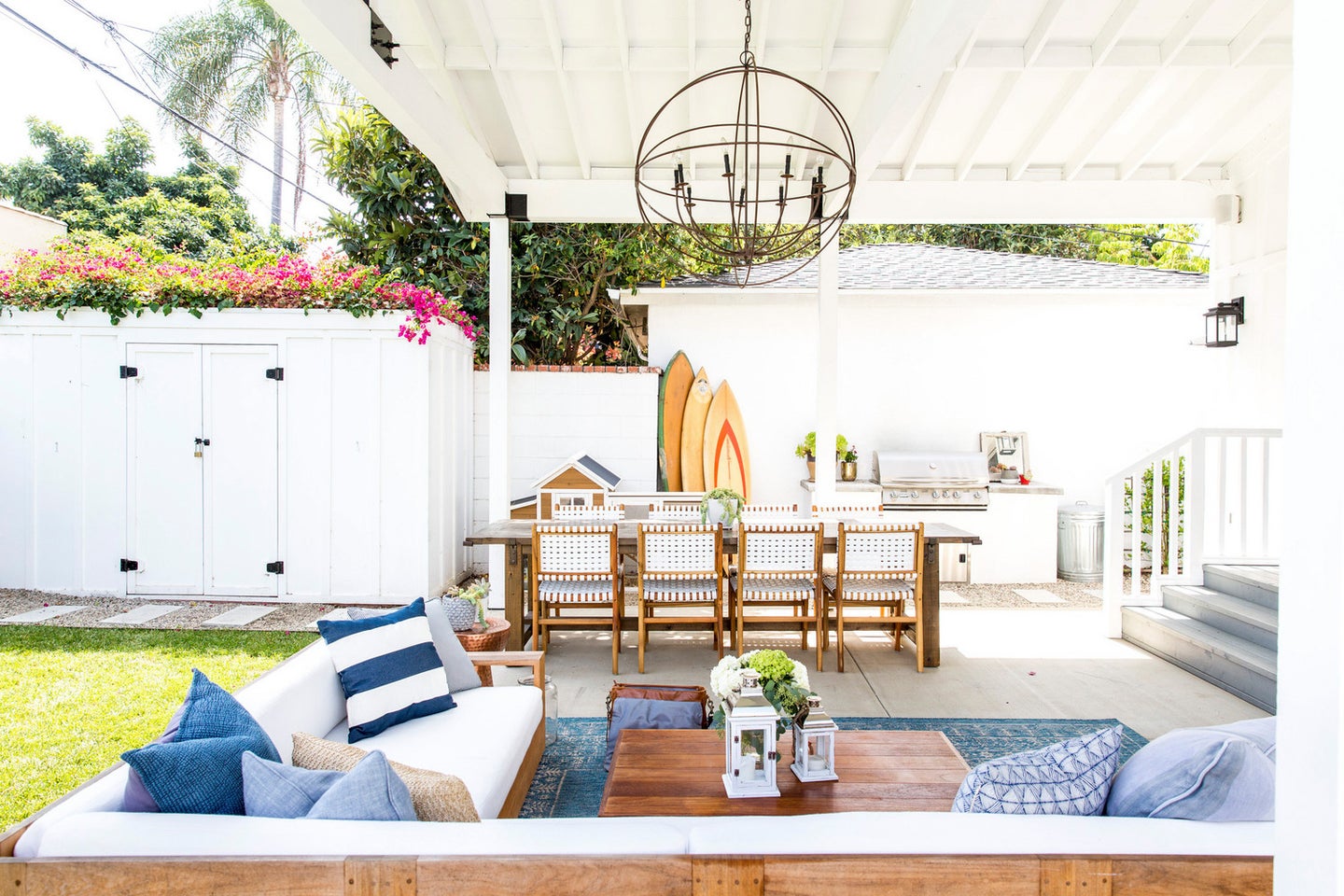 At some point in the future, Erika Payne and her husband Josh want to move to Spain with their two daughters. And while most people who plan to leave their homes in a few years don’t typically spend much time or money styling it to perfection, this couple went the complete opposite direction.

“It’s great, but I can create something equally great later on,” says Payne. “I was never worried about [the home] possibly being short-term. I feel like it would be an easy place to rent or sell in the future.”

Featuring the ever-trendy modern farmhouse aesthetic, a gorgeous outdoor space prime for entertaining, and a fairly neutral-colored, light-filled interior, we have no doubts that the 2,200-square-foot home would be easy to rent or sell either.

Situated in Mar Vista, the three-bedroom residence perfectly fits Payne’s growing family; and we mean this quite literally, as the couple opened the back of the house and expanded the originally 1,100-square-foot house to make more room for two very young daughters and a chicken coop (more on that later).

“We decorated things quickly because we had been dying to live in a home and make it feel like our own, because we were renting beforehand,” explains Payne, who worked with former co-worker and friend Ellen Godfrey on the home. “There were probably two rooms that were most important to me: First the kitchen, because I feel like people spend most of their time in the kitchen.”

If they didn’t before, they certainly will want to in this one. Bright, fresh, and full of both contemporary and traditional elements, it’s a sunny spot where the entire family gathers. Just out of sight is a black buffalo-checked bench—Payne’s favorite piece in the entire home—where every member of the family congregates at some point during the day, be it to do work on a laptop or read a book.

Her second design priority? “My daughter’s nursery. I’ve wanted a daughter all my life, and I’m all about patterns and pale colors and making things beautiful, sweet, and feminine,” says Payne.

Luckily, the couple’s coastal, breezy style lent itself well to decorating with kids. “Having our house be less cluttered and having a more minimal look is great, because there’s less to break,” jokes Payne. “That goes hand in hand with having toddlers! Though we did make a mistake: I thought we could pull off an oatmeal-colored sofa because it’s not stark white, but it still does show dirt. Kids are kids.”

The subdued color palette—a byproduct of Payne’s job as a designer at upscale stationary brand Sugar Paper, she says—also goes along with that coastal, serene vibe Payne and her husband, the CEO of tech startup StackCommerce, love. There’s a lot of white, but the standout hue is blue, woven into every part of the home in some way.

“I am just so happy that blue has come back so strongly into interior design. I really do think that colors set moods, and I was really excited to play with a lot of blue in the outdoor patio area; it just brings it to life, and I love the way the blue and white look against the greenery,” says Payne.

Instead, it could easily pass for an upscale living room—there’s a plush rug to warm up the concrete floor, a statement light fixture, and gorgeous wooden furniture with bright white pillows.

“We love surfing, we love hiking—[Josh] is a triathlete—and we just love to be outside as much as possible. The weather here allows us to do that, so we wanted to bring the indoors outside,” says Payne. “We wanted something comfortable to spend hours on. What we’ve noticed is that people come and hang out longer; as soon as we open a bottle of rosé, people don’t want to leave our backyard because they’re so comfortable on the sofa!”

Despite working through the minor challenge of blending landscape styles—she’s more into flowers while Josh prefers succulents—the couple managed to create a space fit for drinking both a glass of wine with friends or a cup of coffee solo. There’s even something for the little ones: Two chickens reside in a backyard coop, and the couple’s eldest daughter has taken on the task of collecting the eggs while helping out in the garden.

But should the day come when the family does move to Spain, they’re more than ready. “We were just so excited to put our story in a home,” says Payne. “He’s from the Midwest, I’m from the South, and we love the coast. It’s a home that tells our story, but the fact that we might let go of it one day is ok. It was never about holding on to material things.”