Not to mention, help you sleep better. 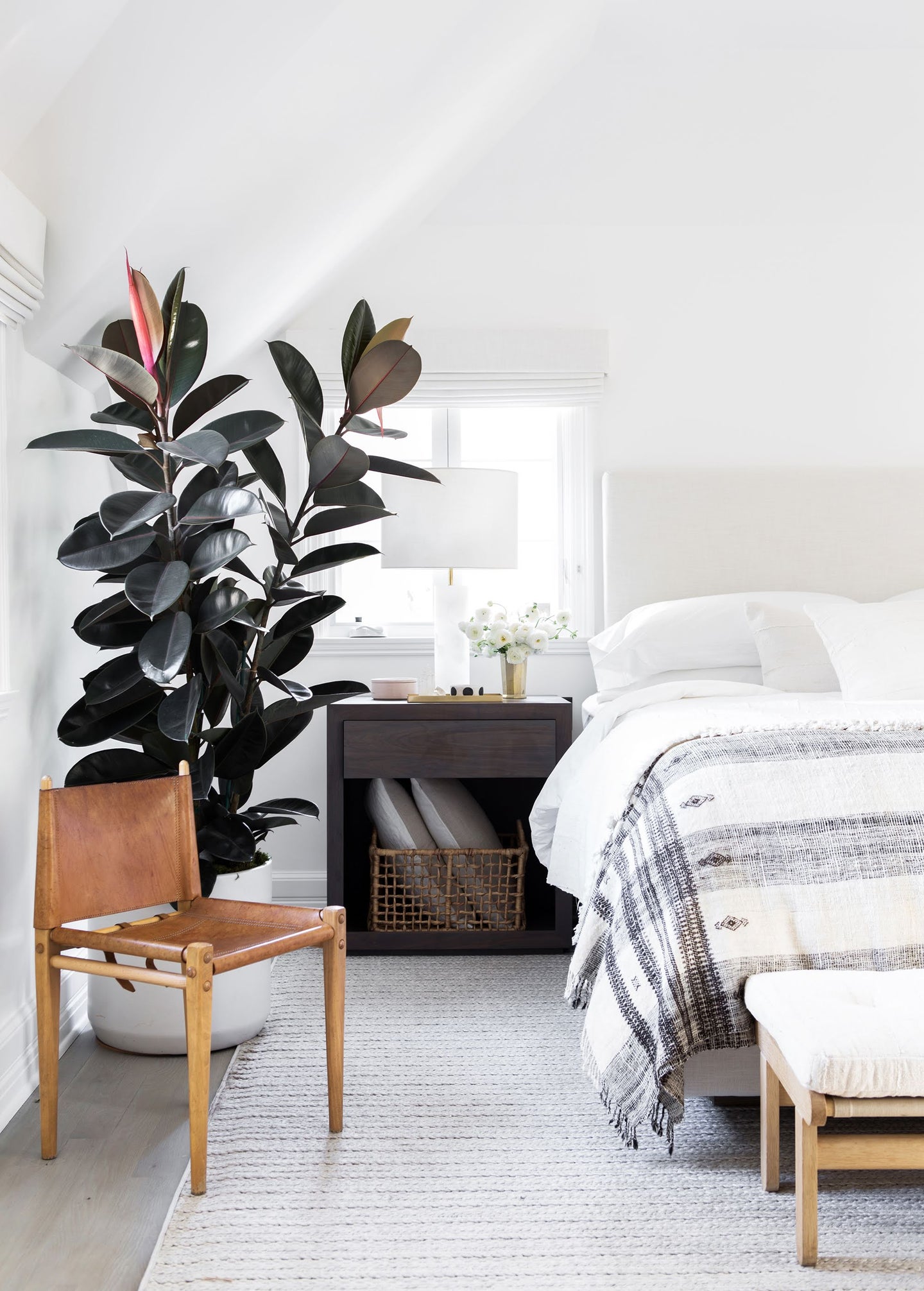 If you’ve fallen prey to the Marie Kondo effect and are in a current state of trying to declutter your entire life, you might want to start with your bedroom. While it’s supposed to be a space of zen and relaxation, it can frequently turn into a storage unit of sorts—closets overflowing with clothes you swear you’ll wear someday, nightstands littered with a bevy of items that couldn’t find a home anywhere else. Well, suffer no more. If the below bedrooms can make minimalism work, there’s hope for us all.

Adhering to a minimalist aesthetic has its stylistic benefits, but it can help you sleep better, too. From a color standpoint, subdued tones are said to calm, making you more likely to catch z’s faster. From a practicality perspective, less clutter = less cleaning = less stress.

Feeling inspired? Here are our favorite pared-back bedrooms—and the ideas to steal from them.

Tip to steal: Decorate with plants.

Take a note from fashion designer Erin Fetherston’s playbook and add statement-making greenery, such as a large rubber plant, to make a spare space feel a little more layered and dynamic.

Minimalism doesn’t mean you have to have an all-white space. Opt for very muted shades of green, blue, and beige to create a room that feels restful but still cozy, just like Jenni Kayne did in her Lake Tahoe lake house.

Tip to steal: Move as much as you can off the floor.

In this attic bedroom, even a lamp on the nightstand would take up valuable space. Plug-in sconces and pendants are a great alternative, drawing the eye up and keeping your floors clear in the process.

Tip to steal: Stick to uniform shades of wood.

If you like a natural look, try to match your wood stains. It will make everything appear more cohesive, which in turn will make the room appear tidier—exhibit A, here. Plus, it’s significantly easier to shop for a space (and conversely, eliminate extra things you don’t really need) when you have strict parameters on materials.

Tip to steal: Bring in texture.

Minimal doesn’t have to mean sterile—quite the opposite. Make up for what you lack in excess decor or color by layering in cozy rugs, woven baskets, and an assortment of linens.

When surfaces are uncluttered, they help open up the whole space. It might seem impractical if you’re used to keeping a tray of accessories within arm’s reach of your pillow, but that’s why nightstands with drawers were invented. However, if your bedside table doesn’t have any, take a cue from this room and seek extra storage elsewhere: in baskets tucked in the corner or even under-bed bins.

Tip to steal: Don’t be afraid of a twin bed.

A smaller mattress means more open square footage, creating a lighter, airier feel that’s much appreciated when you’re working with a cramped bedroom. Plus, downsizing can be a good thing—it forces you to evaluate what you have and toss whatever (quite literally) doesn’t fit.

Whereas you might be hesitant to do so in your kitchen for fear of your dinner plates collecting dust, decor you won’t be eating off of (aka artwork or pottery) is a little more forgiving. Here, a pair of ledges add dimension to a plain white wall.

Tip to steal: When in doubt, go neutral.

If you take minimalist to mean minimal color, embrace an achromatic aesthetic. An assortment of off-whites in natural materials like linen keeps even the most faded of spaces from feeling one-note. Steer clear of stark whites, though, which can make a bedroom appear harsh and bland.

Kate Zimmerman perfected this tactic in her space. Whenever it’s financially feasible, invest in antiques or timeless pieces you’ll have for years to come, which minimizes your consumer footprint and eliminates the need to buy more things later—making you a minimalist in the most literal sense of the word.

See more ideas for living simply: This Is the Most Joyful New Year’s Resolution I’m Making The Latest Hardware Trend Might Actually Save You Money These Are the Most Cluttered Areas of the Home