This Blogger Built Her Dream Bedroom Entirely From Scratch 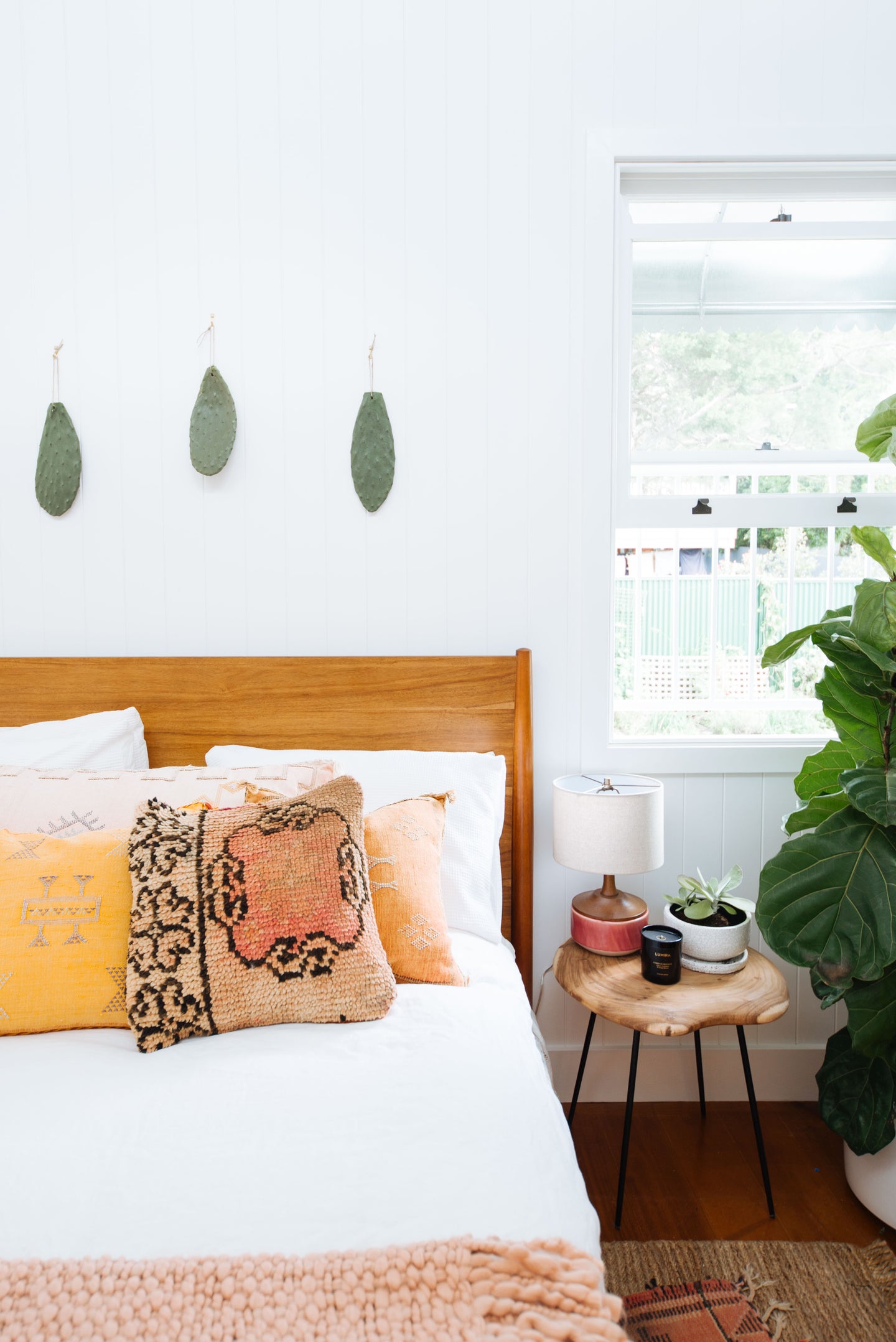 Photography by A Pair And A Spare

Renovating a run-down 1871-era cottage is a daunting process, to say the least.

But Geneva Vanderzeil, the blogger behind A Pair and a Spare, and her partner, Ben McCarthy, the founder of design firm Charlie & Rose, were more than up for the challenge. They almost entirely redid their Brisbane, Australia, home over the course of eight months, which included raising the home, installing new roofing, adding new windows—the works. They’ve been documenting everything over on Vanderzeil’s blog, sharing tricks they’ve learned and revealing finished projects one by one. Their latest reveal? The master suite.

“What I wanted to do was mirror some of the things we loved about the house, like the pine floors and the timber-paneled walls, and add some warm tones in the form of furniture and rugs,” Vanderzeil tells us. “I love the contrast between the fresh white walls and the natural elements in the room.”

The entire home was a lesson in balance. Maintaining the original charm of the home while modernizing it had its challenges, but since this was one of the rooms the couple built from scratch, they could see their entire vision come to life without having to worry about renovating historical features. High on the wish list was a steady stream of natural light, achieved through adding plenty of windows and keeping the backdrop a crisp bright white. Those windows match the original style of the house—a nod to the heritage both Vanderzeil and McCarthy were keen to preserve.

Having previously lived in smaller spaces where the bedroom was more a multifunctional space, Vanderzeil wanted this room to be very distinct in its use. It’s simple and calming, with minimal pieces and a warm color palette of pinks and earthy oranges. There’s not even a closet to detract from the relaxing vibe—instead, McCarthy turned the hallway between the bedroom and the ensuite bathroom into a wall of wardrobes. “We actually used kitchen cabinets,” shares Vanderzeil. “[We] lifted them using mid-century legs and added bowl doorknobs and a coat of gloss to give the perfect mid-century feel. They give us so much storage and were an easy hack.”

Other stars of the space include the plant ledge, one of Vanderzeil’s favorite parts of the room, situated directly opposite the bed, and the ensuite bathroom. A lot of it is DIY, as you can imagine; the rattan pendants in the bathroom are actually Ikea woven baskets Vanderzeil cut up and fit to the light fixtures.

And as far as the bedroom goes, the pieces are simple but far from boring.

An arched mirror Vanderzeil found at a garage sale for $5 and revamped (“It just goes to show that you can’t judge a garage sale book by its cover,” she says) sits on a mid-century dresser, adding depth to the small room. White linen sheets provide a backdrop for a troop of throw cushions in various colors and patterns. Layered rugs, one jute and one patterned, bring interest to the floor. It’s all travel-inspired and personal; a mixture of styles, antiques, and textiles.

“I think it’s always a good idea to mix your favorite decor styles and types, along with things you have collected, and not go over the top on any trend—as much as you might want to—so the space feels like you without feeling like a showroom,” says Vanderzeil.

Which just goes to show that if you’re trying to renovate your bedroom and you’re not sure how to reconcile your varied interests and tastes, don’t worry about perfection. According to Vanderzeil, a little eclecticism and imperfection go a long way.

See more bedrooms we love: This Parisian-Themed Bedroom Is All About Cool DIYs 11 #SoDomino Bedrooms That Will Chase Away Your Winter Blues 8 Minimalist Bedrooms That Would Make Marie Kondo Proud