From a custom closet to a built-in bookcase. 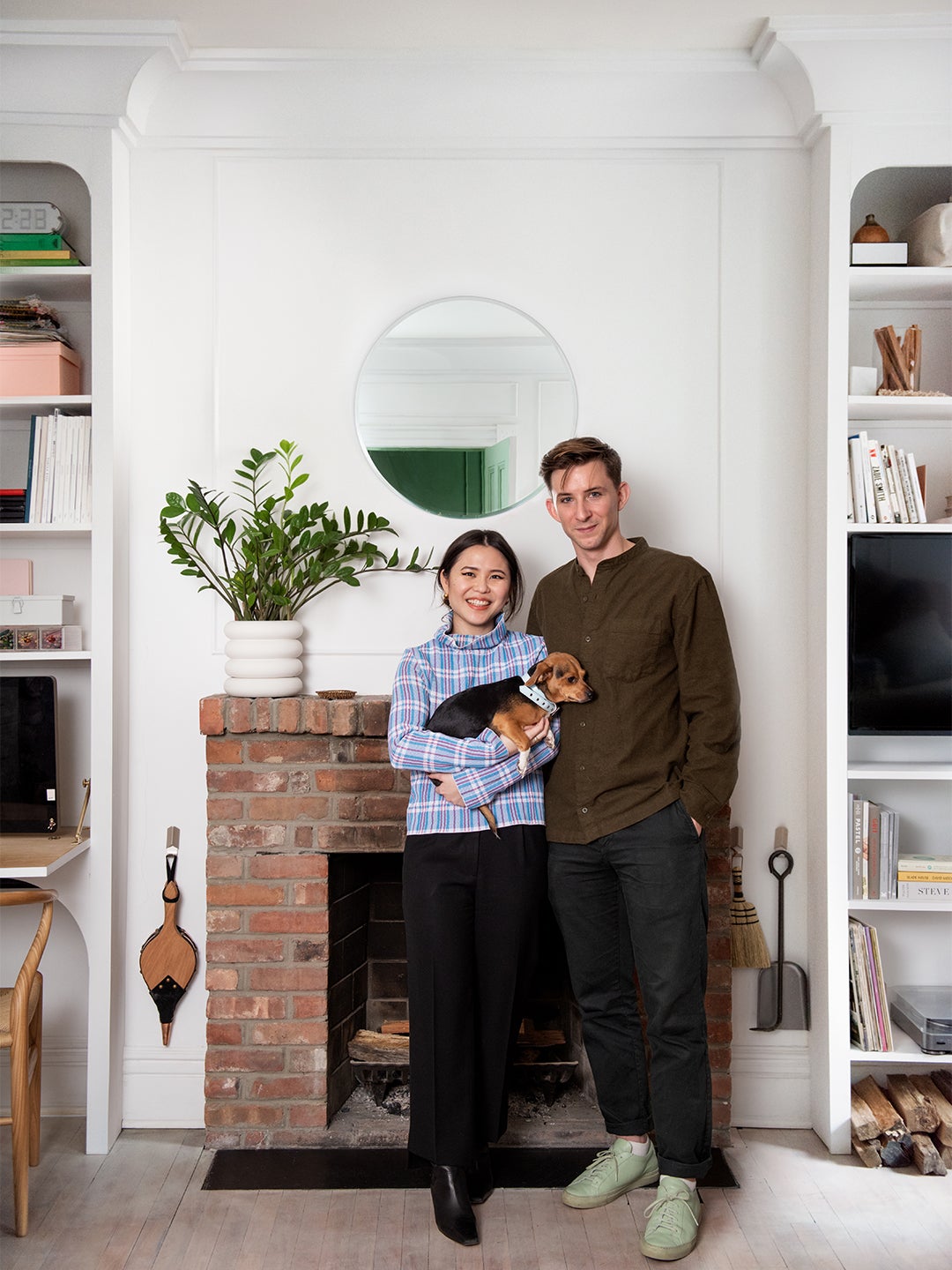 “When I think of beautiful older homes, I alway picture a library,” says Laura Yeh. It’s fitting, then, that installing one of her own was the first project she and her boyfriend, Zach Jenkins, tackled when they moved into their newly purchased, 100-year-old Park Slope, Brooklyn, apartment in 2018. The place was severely lacking in storage solutions, but they were well equipped to figure out custom fixes: Yeh is a senior designer at Glossier who studied furniture design in college, and Jenkins is a design lead at luxury furniture brand Hellman-Chang. Together, they could dream up—and execute—a space all their own.

“We were looking for somewhere that hadn’t been updated by someone else, because we wanted to make the place ours,” says Yeh. “It felt wasteful to undo an earlier renovation to do our own.” They got right to work on the basics, stripping away hundreds of years of paint from the trim and molding before repainting it, hard wiring lighting in the living room, and installing elegant wainscoting. From there, they could focus on the biggest challenge: where to put their books, art supplies, clothes, and antiques market collectibles. Shelving in the living room was the obvious answer.

“I used to have access to a woodshop, so taking advantage of that was a high priority,” says Jenkins. The couple’s storage design solved a second problem, a slightly asymmetrical wall, where the fireplace jutted out a bit too much. They also factored in an extra feature: two side-by-side secretary desks, so they could each have a workstation that could be tucked away when not in use.

The greater task came when they decided to tackle another standout issue: The bedroom’s closet space was not only cramped, its layout wasted precious square footage. Here, they had to start from scratch.

The couple knocked down the preexisting closets and configured a floor-to-ceiling, built-in wardrobe. “Getting it right—especially Laura’s side—took a while,” says Jenkins (they finished the project this past October). “Hers is split, so there’s a section that’s tall enough for her to hang her dresses, and there are extra shelves. My side is much simpler.” Yeh figured out a surprising solution for accessing the tallest cabinets: She got herself a garment hook, the kind you’d find in a retail store, to grab that just-out-of-reach top. The middle section of the wardrobe, rather diplomatically, is devoted to shared belongings—tote bags and linens and the like. Even their dog, Bruce, has a drawer.

Another new closet rather surreptitiously installed in the living room and some smaller additions (a slim Yamazaki shoe tower that makes good use of vertical space, a robin’s-egg blue pegboard inspired by Julia Child’s kitchen) added to the organizing capacity so that the pair could focus on what was most important to them—making their apartment feel like home.

That meant highlighting some family heirlooms, like a vintage Eames-inspired chair that had been sitting in Jenkins’s aunt’s basement. They reupholstered it themselves with white leather Yeh had bought years before while studying abroad in Copenhagen. “We had to put the leather on each button,” Jenkins says. “I had no fingerprints left when it was done, but it was a fun project.”

The couple’s taste—eclectic with a Scandinavian influence—has drawn them to collect a mishmash of furnishings (Yeh snagged their antique rugs at a flea market in Paris, while their sofa is from West Elm). But they pulled it all together with gentle pops of emerald—which become far more enveloping in the bedroom, which they painted all over in Farrow & Ball’s Breakfast Room Green. “We wanted to feel wrapped in color,” says Yeh.

Though the property may have been their second choice (they were initially outbid on an apartment in nearby Clinton Hill), Yeh and Jenkins wouldn’t have it any other way.

See more stories like this: This Philly Home Takes Gallery Walls to an Unparalleled Level Madelynn Furlong’s Little Slice of Paris in Los Angeles A Mauve and Teal Kitchen Sets the Tone in This Moody Melbourne Home