We Built Our Cozy, Sustainable Home From Scratch

It features not one but four decks. 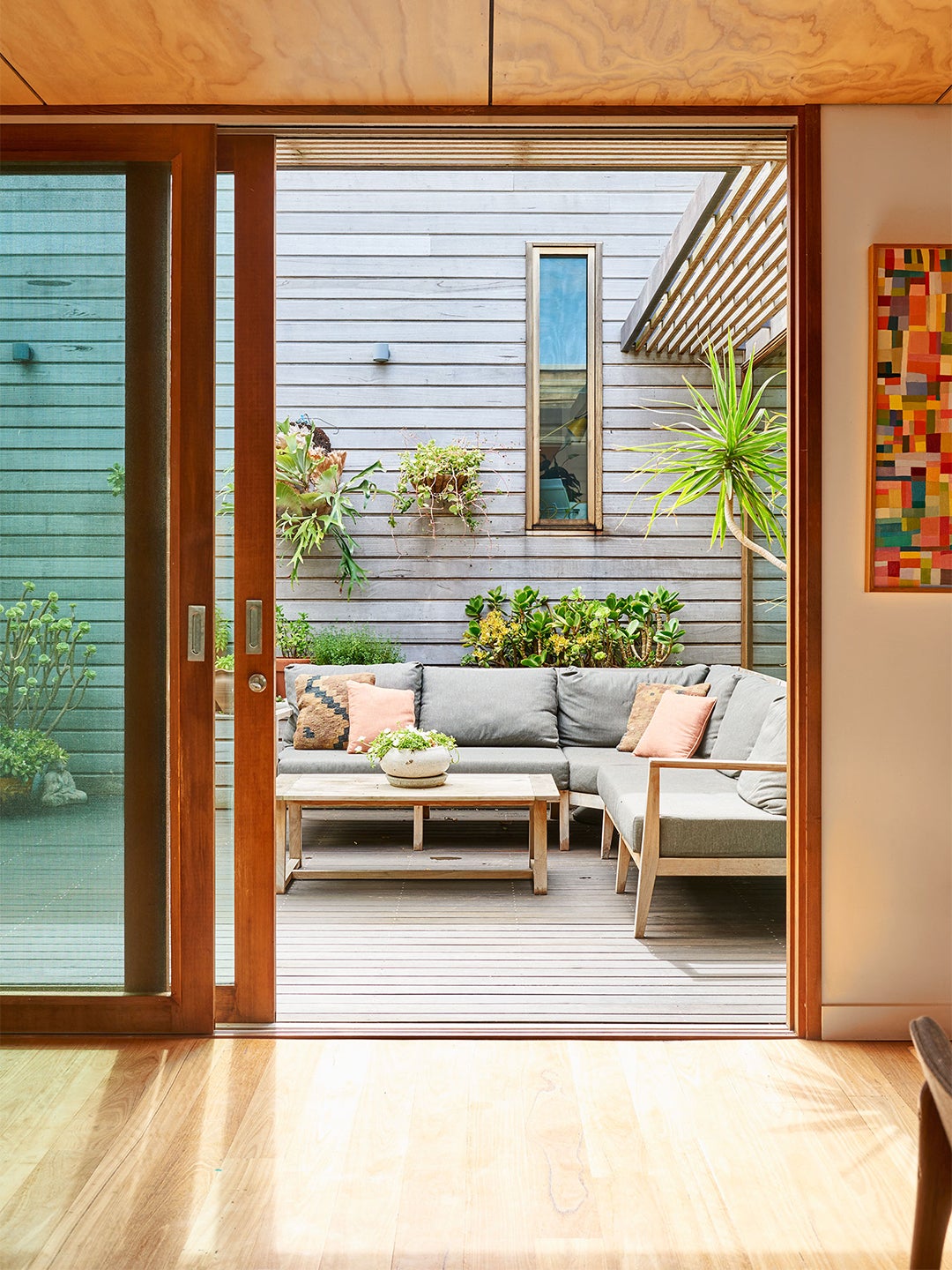 When Sarah McLeish first showed her partner, Scott Nicholas, the plot of land in beachy Torquay, Australia, where they’d eventually build their dream home, he wasn’t sold. Then she took him down to the river that was just 50 yards away. “I was like, ‘Cool. Let’s do it,’” he says. You can’t beat that proximity. They bought the property that day.

Nature has always been important to the couple—McLeish grew up on a farm with a green-thumb mother, and Nicholas hails from Portland, Oregon. So they placed the utmost importance on their new house feeling harmonious with nature, both in its eco-friendly standards and use of outdoor spaces. The result? A unique, horseshoe-shaped home, constructed with the help of a draftsman friend, that appears to hover ever so slightly above the trees. Here, they share their 18-month design and building process, which they completed in 2013.

They Mastered the Art of Indoor-Outdoor Living

For McLeish and Nicholas, building from the ground up gave them an opportunity to tackle an exciting challenge: How could they maximize the amount of outdoor space on their property, while still optimizing their interiors? The ended up with a design that included not just one but four decks, where they could hang out as a family, tend to potted plants, or take a shower after coming back from the beach. Since the property faces southwest, a U-shaped structure ensured that their main outdoor area would be shielded from the elements. “It still feels warm, even on a windy day,” says Nicholas. “And in the summer, it gets plenty of shade.”

McLeish worked with a landscape designer to fill the property with native plants and shrubs, fruit trees, and succulents that would thrive on the plot, and rounded it out with vegetable gardens. And adding ample windows to the house helps them appreciate their surroundings even when they do stay inside. “We wanted to look out and see a lot of green,” she says.

They Followed a Checklist for Sustainability

With an impressive, nearly 7 Star energy rating (according to Australian regulations), the couple’s home is full of eco-friendly features. Low-E glass windows make the heating system more efficient (and have a slight green tint that jibes well with the property’s palette), as do low ceilings and a double layer of insulation in the floors. “The ratings are very formula based, so it helped us to simply follow those guidelines,” says McLeish.

They Devoted Walls to Their Art

With about 50 different works of art in their collection, McLeish and Nicholas knew they needed to have enough blank walls to keep as much as possible on display. While they frequently rotate pieces to different spots, a few key ones have remained in place—and some ended up being solutions to what the couple originally considered design mistakes.

When McLeish looks back, she wishes that she had covered their entire kitchen wall with the vivid green scale tiles that make up the backsplash—but then she wouldn’t have the perfect spot for the framed, hand-painted scarf that was passed down to her from her mother. And in the living room, Nicholas commissioned a painting to fit like a jigsaw in the cutout corner of the fireplace’s plywood front—a feature that was added by the builder before McLeish officially approved it. “I wanted to cry every day because we couldn’t pull it off,” she says. “And now it’s so ideal.”

They Decorated With a “Buy Nothing New” Philosophy

“I lost a house in my early 30s—it burned to the ground and ruined absolutely everything,” says McLeish. “From then on, I swore to myself that I wouldn’t buy anything new unless I had to.” So the couple filled their home with finds from secondhand shops, including an old table that McLeish sanded to look fresh and a set of chairs she scooped up for about $30 and reupholstered. Their sole exception? A sustainably made sofa from Jardan.

They Made It Feel as Cozy as Possible

An abundance of timber and plywood inside and out pay homage to Nicholas’s Portland roots and also nod to the family’s love of snowboarding and skiing: Their natural-toned home is a beach house and a modest mountain chalet all in one. A number of built-in lounges help create a ’70s-inspired sunken lounge effect, and deliberately placed lighting adds to the moody ambience. “The builder kept saying, ‘Your house is going to be way too dark,’” Nicholas recalls. “We were like, ‘That’s good.’”

Although the couple placed their home on the market recently—with their two teenage children about to leave the nest, they’re ready to settle someplace smaller and eager to try their hand at an off-the-grid house—recent shelter-in-place orders have made them reconsider the sanctuary they’ve built entirely from scratch.

For now, the family is spending their days strolling through the nearby bush and enjoying even more time out on their decks, speakers on and drinks in hand, hoping that sooner rather than later they’ll once again be able to share this space with the people they love. “Anytime we plan dinner parties, friends say, ‘Can we do it at your house?’” says Nicholas. “There’s no better compliment.”