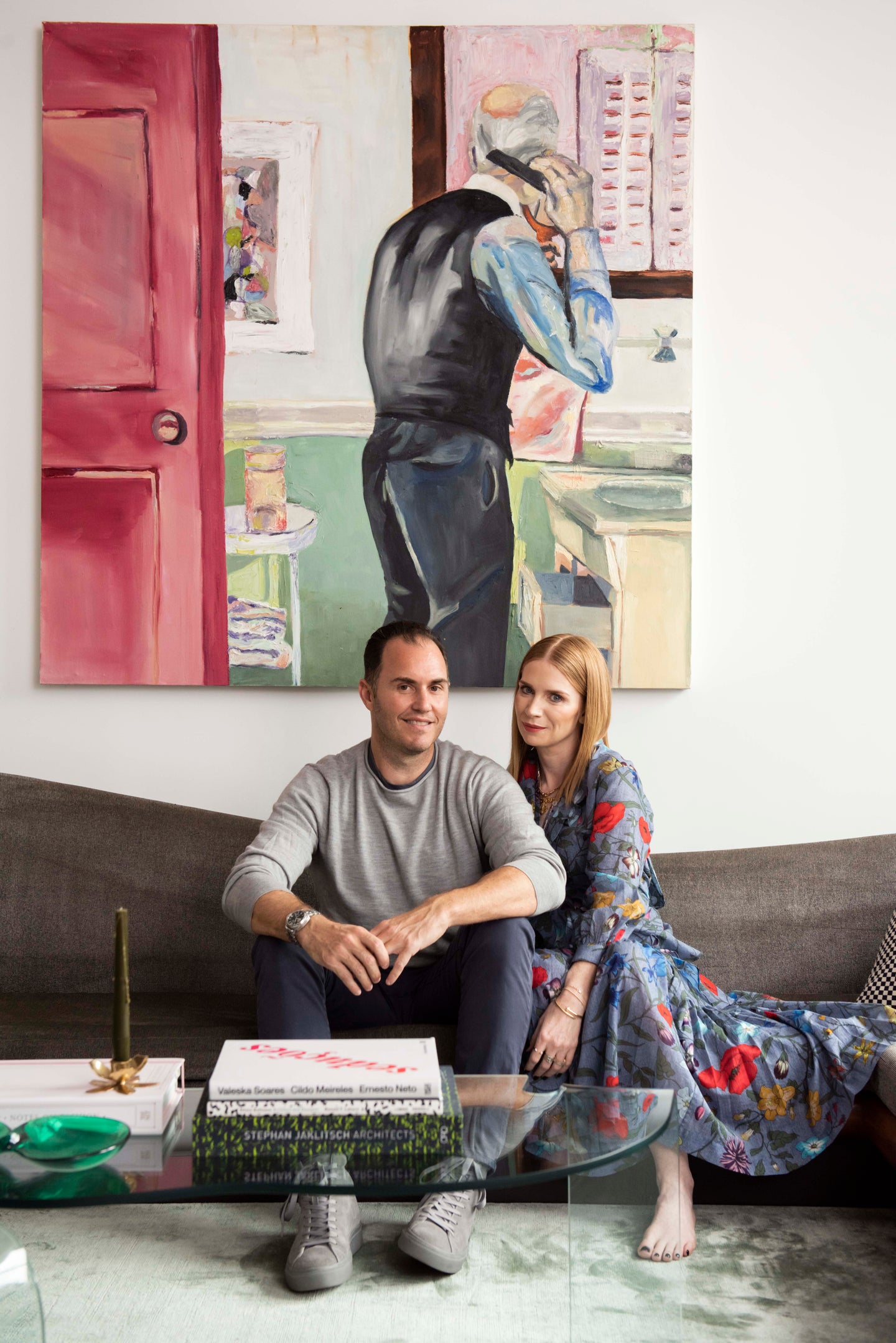 Katie and Brandon Conovitz never expected to have four children in the span of three years. (Let that sink in.) The Manhattan-based couple was pregnant with their second when they reluctantly decided to relocate to a sleepy suburb in Long Island in search of elusive square footage. That is until a real-estate listing caught their eye. “Go jumbo in Dumbo,” it read. Back then, crossing the bridge to the now-famous Brooklyn Bridge-adjacent neighborhood was considered more adventurous than trendy. But they couldn’t pass up this generous one-bedroom, 2.5-bath apartment: The lower floor had near-endless potential with almost 1,500 square feet and 13-foot ceilings (they wouldn’t need to leave the city!) and, serendipitously, there was room to grow—a year later, the couple would find out they were pregnant again (with twins!). “The downstairs was a basketball court,” remembers Brandon. “It was this big open space with a massive ceiling. It just required a vision.” It’s now the children’s lair: a veritable jungle gym divided into three separate bedrooms filled with purple lofted beds and basketball hoops. “It was a kid storm here for about five or six years,” remembers Katie, who founded TwelveNYC, a product development agency she now runs with her husband. After living in the place for seven years, the couple decided it was high time to give the upstairs—land of the grown-ups—the facelift it badly needed.

The old cardboard-box factory, which was converted into condos in 2006, wasn’t dated per se, but with four young children running around, the builder-grade finishes were starting to peel off the walls and the tiny galley kitchen wasn’t conducive to feeding a mini wolf pack. After trying their hand at a few DIY fixes, the couple finally came to the realization that, as creative as they were at work, interior design was not their wheelhouse. Luckily, they were introduced to another married duo with a set of twins: Brittney Hart and Justin Capuco of the firm Husband Wife.

Hart and Capuco were passionate, imaginative, and full of ideas: arched window frames would go up here, ’70s-inspired modular sectionals would be installed there. Every design decision was calculated to create a quiet space that could also endure a tornado of kids spinning through the kitchen every day after school—the modern metal dining chairs were upholstered in faux vinyl and the curvaceous sofa was covered in industrial-grade velvet.

“Finding three feet of space in New York is like finding gold.”—Katie Conovitz

The mod influences were no accident. “We were both born in 1976, and I think it’s an era that feels a little nostalgic but still so cool,” says Katie. After a trip to Palm Springs, the designers returned with a curvy Adrian Pearsall mid-century sectional and an imposing ’70s Curtis Jere Crane floor lamp, the building blocks of the living room. The couple was starting over from scratch, furniture-wise, save for one large painting by Katie’s mother that informed the rest of the room’s color palette. A shimmering emerald rug and similarly hued vintage Italian coffee table pick up on its seafoam shades.

The apartment’s pièce de résistance: a massive kitchen island–meets–dining table made from a single slab of oyster-white marble the couple held onto for two years before installing. The table (a space-saving idea by Capuco) comfortably sits six and is Brandon’s hangout spot of choice. “When he’s not sitting on his laptop at the table, he’s cooking a rotation of tacos, turkey burgers, and big salad bowls,” says Katie.

Katie prefers to hold court from the master bedroom. In there, a retro-inspired upholstered platform bed provides the perfect pedestal from which to spend time with each child. “I get into bed and everyone comes,” she says. “Between my bath and my bed, I feel like my kids’ only memories of me will be horizontal.”

The bathtub was Katie’s only must-have—she takes a soak every single day after work to decompress. The master bath floor plan was all laid out, but in the midst of demolishing a wall, they fortuitously discovered hidden square footage. “We realized that there was nothing in the cavity,” says Hart of the space, which was supposed to house plumbing risers and electrical ductwork. It’s now the location of the dramatic Calacatta Viola marble tub.

“Finding three feet of space in New York is like finding gold,” says Katie with a laugh. Since part of it would be hidden behind a large structural column, the designers flanked the space with another one (complete with carved-out nooks for soap and shampoo) to make the nook feel intentional.

The couple commutes across the street from their home to their workspace each day. “It was serendipitous that we ended up in this apartment,” Katie explains. “We’ve watched Dumbo grow, we’ve watched our business grow, and our lives have flourished here.” With a newly grown-up space, the ever-growing family can coexist better than ever. As it turns out, going jumbo in Dumbo paid off in more ways than one.

Discover more NYC homes we can’t get enough of: The Best Feature in This SoHo Loft Took Some Major Convincing Lena Dunham Finds Her Happy Place IKEA-Meets-Gufram in This Playful Family Home