IKEA-Meets-Gufram in This Playful Family Home 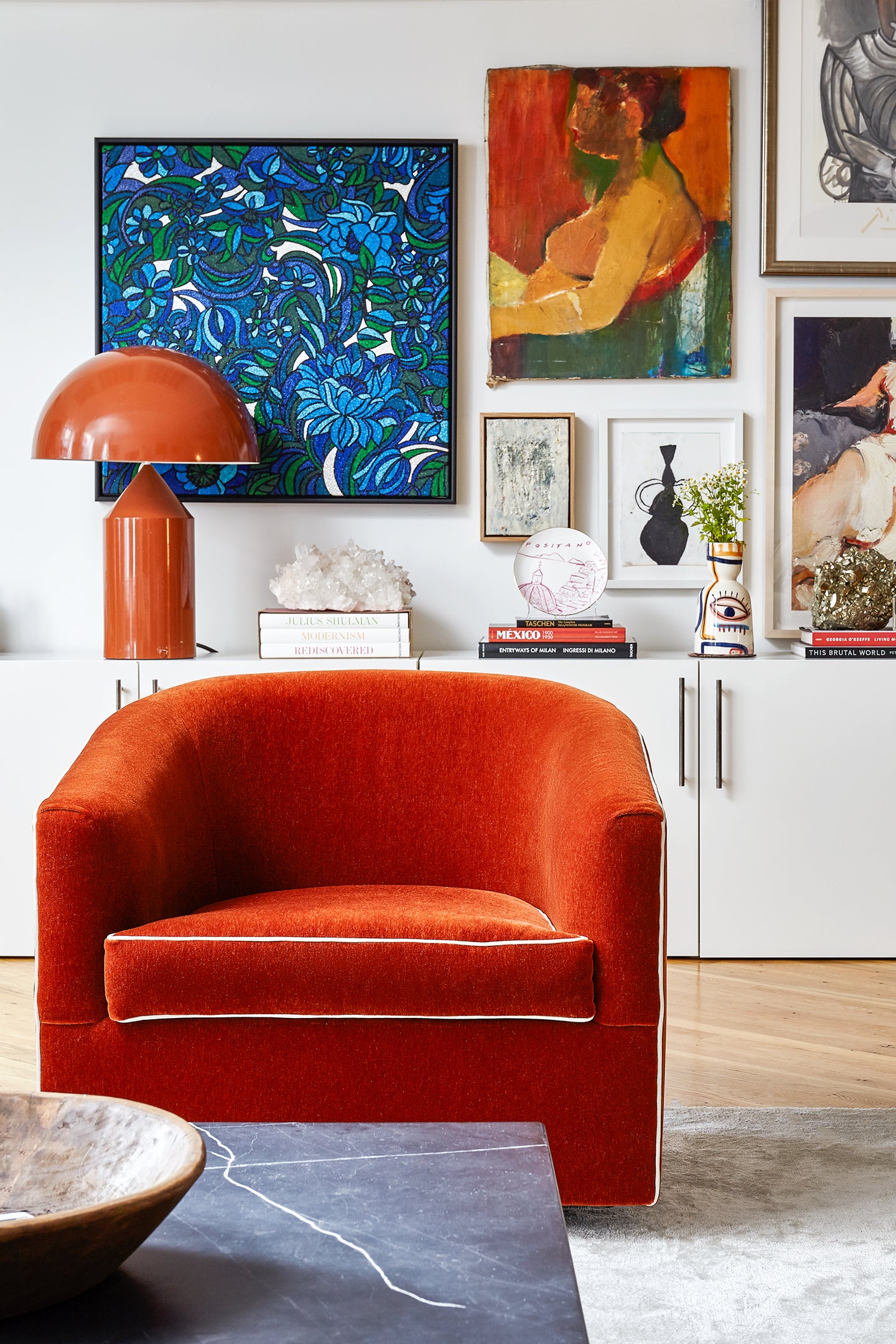 Things are constantly in flux in designer Tali Roth’s New York City apartment, which she shares with her husband, Marcus, and two sons, 4-year-old Phoenix and 3-month-old Romeo. The Aussie expat, who moved from Melbourne to NYC’s Chelsea neighborhood with Marcus back before the kids arrived, has built her career on creating imaginative, elegant spaces for her clients without spending a fortune—something she learned, in part, from slowly designing her own rental.

“When I moved in here, I was motivated to have everything perfect on day one,” she says. “Now I can see how I’ve added things over time, and I think it’s nice to leave pauses in your apartment for that. But I also think it’s important to really, completely express yourself in your space the best you can, even if it’s using flea market finds.” An IKEA storage unit sits next to a 1950s Italian rattan chair she bought at auction and a beautiful mohair sofa from Crofthouse L.A. On her gallery wall, art by Paul Davies and Georgia O’Keeffe hang beside inexpensive pieces found at the local flea.

Now on maternity leave after the birth of Romeo, Roth has refocused her creative energy on her own place yet again, rearranging furniture, moving art around, and collecting new pieces. Her latest splurge: a giant Gufram cactus coatrack that sits in the kids’ play area. Nothing is too precious, but everything is good enough for grown-ups. If it weren’t for the playhouse or the stroller in the entryway, you’d almost forget children lived there.

However, behind the elegant facade and Roth’s collections of objects, a dozen decor tricks show that you really don’t need an unlimited budget to create an elevated family home. Here, Roth shares her advice for curating a space—a rental, no less—that’s chic enough for adults but low maintenance enough for children.

Step Away From Delicate Textiles

Roth’s enemy number one: viscose fabrics. “If you spill anything on it, like a glass of water, it shrivels,” she explains. In her living room, she reupholstered the long sofa that sits underneath the window in resilient mohair: “Wool you can wash.”

Her second couch is even less precious: “I love the fact that we can all watch a movie together on it. I’ve wrapped a blanket around it so that I can breastfeed on it, and, when my son had his tonsils taken out, he could eat an ice pop on it.”

For her living room, Roth made sure to pick pieces that could withstand two rambunctious little boys. “Kids climb on everything,” she says, pointing to the low-slung marble coffee table. “I’m not as worried about the sharp corners as I am about things tipping.”

The living room’s biggest caveat, surprisingly, is the detail that looks the most child-friendly: a collection of round pillows on the sofa. “Phoenix sits there every morning and wants to watch a show before breakfast, and he just stretches out on the couch and drools on it and pushes all the balls off, and he doesn’t even know he’s doing it,” Roth says with a laugh.

If there’s one thing that the designer knows how to do better than anyone, it’s mixing high and low design. The 170-inch-long wall-mounted cabinet in the living room is from IKEA but spruced up with a Semihandmade top, fronts, and hardware. In the dining room, the brass-and-wood shelves were an Etsy find. While Roth loves to splurge on art and collectible furniture, she saves on pieces that aren’t transferable to a new apartment. “I don’t see the point in spending the money if it’s only for two years.”

The two orangey red chairs in Roth’s living room may look like a splurge, but they were actually $300 each on Etsy. “They were in a poo-green color and they were old,” remembers the designer. First, she reupholstered them in a baby blue velvet for Phoenix’s room, but on a trip to Paris with her husband a few years later, she had an aha moment.

“We stayed at Les Bains, and I just loved its rust velvet sofas with the white piping,” Roth recalls. With the two seats no longer a fit in Phoenix’s room, she had the perfect opportunity to re-cover them yet again in a similar fabric. “The cost of reupholstery is expensive, but I wanted to keep them, there’s a story behind them, and they’re swivel, so they’re timeless.”

Get Thrifty With Bigger Purchases

Roth rarely paid asking price for the pieces she did decide to invest in—auctions and flea markets are her best friends. One of her sofas is from the ABC Carpet & Home Outlet, and her Rudolf Wolff dining chairs were purchased as two separate sets from different vendors. “If you look closely, half of the chairs have round legs and half have square legs,” says the designer, who also had to spray-paint one of them black to match. “That was a learning curve.” As for the dining table, she designed it herself.

Get Crafty With Storage

“This apartment has zero storage,” says Roth. “It has a closet in the two bedrooms in the back and that’s it.” In the boys’ rooms, she relies on a mix of customized pieces and hidden shelves to fit all the toys and clothes. In the master bedroom, modular IKEA units keep everything out of sight.

The pieces that are on display each have a story: A decorative plate by Luke Edward Hall was bought in Positano; the crystals were given to the kids by Roth’s father; a vase was purchased in Murano by the couple while on vacation; and art was gifted by friends and neighbors. It seems Roth has discovered the secret recipe for family-friendly design. With a little vision, a few clever hacks, and an eye for beautiful details, anything is possible.