Up Among the Trees, a Family’s Melbourne Home Thrives on Playful Patterns

Their 4-year-old has a knack for bed styling.

By
Lydia Geisel
Photography by
Sage and Clare 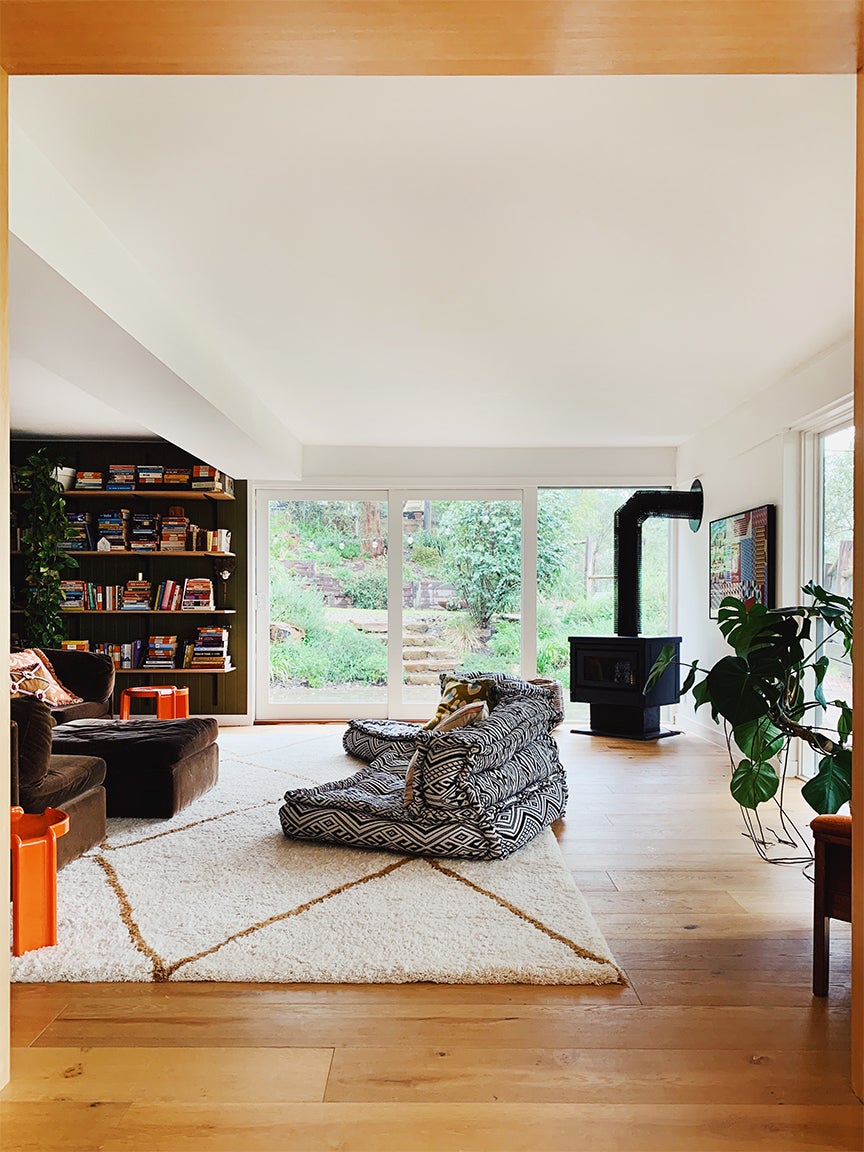 Phoebe Bell doesn’t have to hassle her 4-year-old son, Jude, to make his bed. He wants to do it. “We actually kind of battle about who can make the better bed,” she says with a laugh. Recently Jude made an argument for why all the pillows should be lined down the middle of the comforter. Even at such a young age, it’s clear he has his mom’s eye for texture and pattern mixing (Bell and her husband, Chris Monahan, are the founders of colorful and bohemian homewares brand Sage x Clare). One of Jude and Bell’s most recent combinations included a fitted sheet with abstract hearts, a flat sheet with the words whole, love, matter on repeat, a strawberry-covered pillowcase, and a star-shaped crocheted cushion. “He’s quite particular about things,” adds Bell.

With the pandemic grounding the whole family at their Melbourne house, Jude and even his 1-year-old sister, Heidi, have had plenty of time to observe their parents fine-tuning fabric choices. “Working from home has been an opportunity to bring our kids into what we do, rather than fight it and be like: ‘Don’t bother me on my conference call,’” says Bell. But on the days when everyone needs a little sense of separation, it’s relatively easy to find peace and quiet thanks to the two-story home’s semi-chopped-up floor plan. The lush view was the initial factor that drew the couple to the property in the first place (leafy canopies frame the circa-1970 structure’s main floor so you “almost feel like you’re in a treehouse,” says Bell). But what made the house stick was the layout. “When they’re teenagers, having all these zones is going to be awesome,” she notes.

The TV-free living area and dining space are open to one another (meaning Bell and Monahan can eat dinner at a leisurely pace while the children build forts with sofa cushions nearby), while Heidi’s nursery and the main bedroom and bathroom are located down one hallway, and a shared bathroom and Jude’s bedroom can be found at the other end of the house. Downstairs there’s a third guest bedroom (bonus: a small office is set up on the other side of the headboard) and a large media-slash-play space, which Bell took from dungeonlike to chic with olive green paneling and low-profile (read: toddler-friendly) seating.

Rearranging the furniture has been a welcome distraction for Bell during the latest lockdown. “COVID has made me want to create a sense of newness,” she says. With the temperatures still a bit chilly outside, she has since turned the purple sofa upstairs so that it faces the wood-burning stove, “so we can cozy up around the fire.” Most of the items are vintage pieces she’s picked up from Facebook Marketplace and Gumtree. Bell prefers things that are already a bit worn, that way nothing feels overly precious (a water ring here or misplaced marker doodle there is okay by her). “The beauty is, you can enjoy them for a few years, but then if they’re not right for you, you can relist them and pretty much get the same price you bought them for,” she says.

Instead of buying a designated changing station for Heidi that will likely only make sense in the room for a few more years, Bell opted for a simple mid-century chest of drawers that can stay in her daughter’s space as she grows older. “No one really tells you before you have kids that those things aren’t required,” says the designer.

While there are a few treasured prints hanging on the walls (including an Yves Saint Laurent poster Monahan gifted Bell for their anniversary), the home is mostly filled with 3-D art. The enormous wall hanging in the dining room was scored after the artist, Maryanne Moodie, revealed on Instagram that she had mistakenly made it too big for her client, confusing centimeter measurements for inches. Other standouts: twig house sculptures created by Bell’s father (one hangs over Jude’s book-storage–friendly headboard). “It’s been really sweet to incorporate them into the kids’ rooms,” she says.

All the kids’ stuff is displayed according to their current interests. Bell only keeps out the things they are super-obsessed with at the moment. For example, Jude has been on a coloring spree, so she created a drawing station at a small table for him and stowed many of his other toys. “I think they can get really bored if they have access to all their things all the time,” she explains.

The newest Sage x Clare collection, dubbed Anabelle (dropping September 17), is set to be as fun and colorful as the last ones, but any reveal hits home a bit differently these days. “We only do two a year, and with supply chains and photo shoots so impacted by the pandemic, when you get to launch time, it feels like such a momentous thing,” says Bell. Luckily she’s got a mini stylist on hand who can show how to put all the new bedding staples to use.