How they brought charm into a new build. 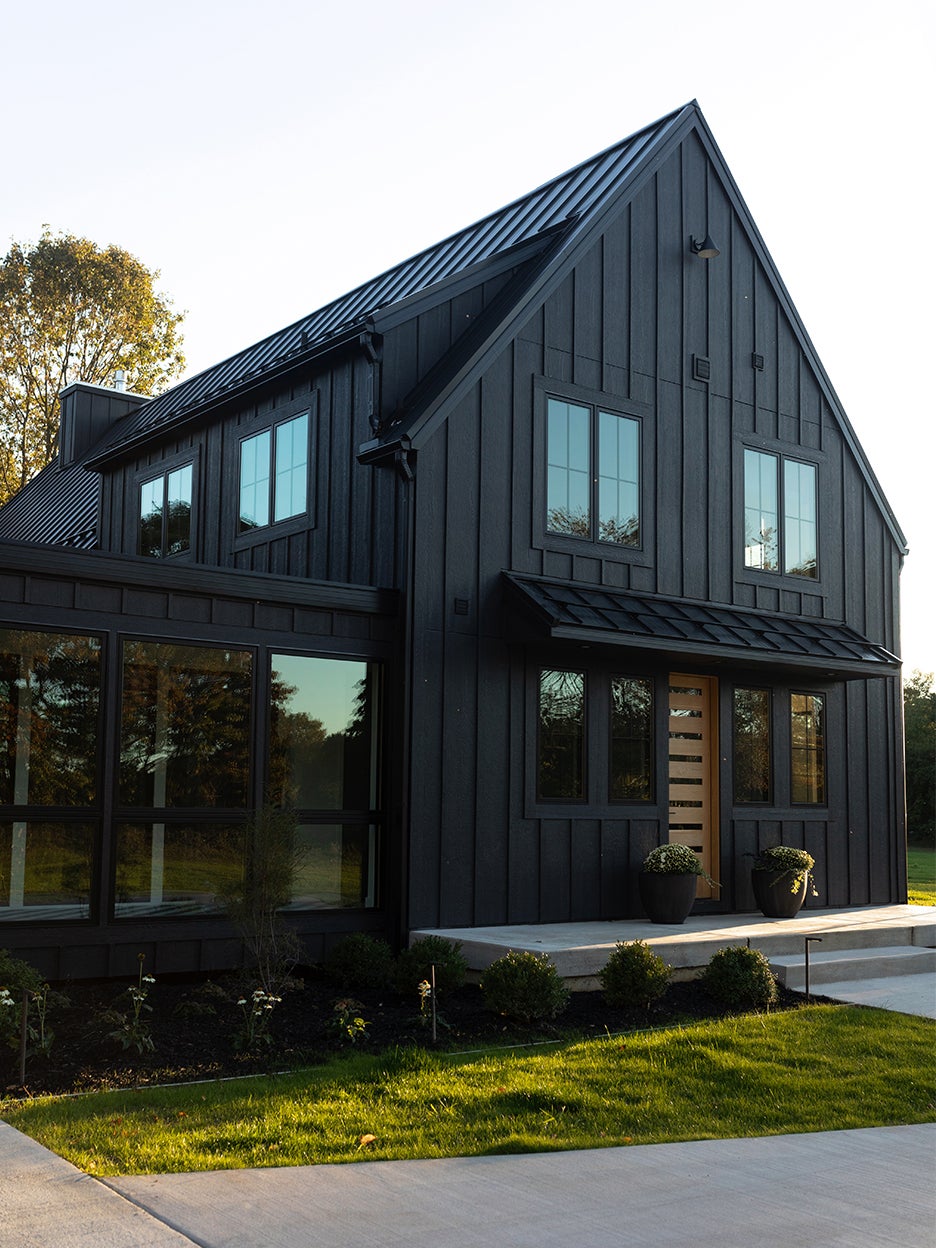 When Target launched a 30-something-piece lighting collection with Leanne Ford back in early 2019, Michigan-based designer Liz Hoekzema of KLH Custom Homes didn’t just take notice. She started stockpiling the luxe-looking dome pendant lamps. “The price point made sense and the timing was right, so I grabbed them,” she says, knowing that someday the perfect project would come along where she’d be able to put the affordable fixtures into play, saving her clients money and herself the headache of sourcing chic options. So whatever happened to the fixtures she scooped up nearly three years ago? Four of them are in 2 1/2-year-old Nolan Moon’s playroom, mounted on a ceiling that’s swathed in an equally whimsical, mustard-hued zebra wallpaper. “They could have landed almost anywhere, but it was so fun to bring them altogether in this one spot,” says the designer.

Megan and Dustin Moon, the home’s owners (and Nolan’s parents), note that most of their family and friends tried to convince them not to build a house from the ground up. Picking every last finish and floor plan would be too overwhelming, their loved ones argued (especially because Nolan was only a newborn at the time). But nothing the Michigan natives saw when they decided to make the move from the small town of Marshall to Kalamazoo had enough land for them to roam. Plus the interior didn’t fit the playful yet modern farmhouse vibe they were after. So when the couple discovered that KLH oversees everything from the construction blueprints to the coffee-table accessories, they decided to break ground on the woodsy 2 1/2-acre plot. “We were starting with a blank sheet of paper,” recalls Hoekzema. Well, that and a cache of Target lights.

The couple wanted to introduce some quirk to the typical modern farmhouse, so instead of rustic, salvaged wood beams, they opted for white oak floors finished in a clear coat to bring out the yellow-warm undertones (a stark wash would have given away that the family’s new build was new). In lieu of popular subway tiles, they went with stars and hits of mustard yellow stripes. “These grounded elements give the home character,” says Hoekzema. For the exterior, they opted for a Danish barn–inspired look, going with a dark metal pitched roof and fiber cement-board siding that has the appearance of shou sugi ban. “We wanted to take some risks,” says Megan. “Because we thought, this might be the only time we do this; to do whatever we want.”

The kitchen’s tuxedo-inspired palette serves a similar mood: The soapstone-topped island and jet-black wall of cabinetry that disguises the refrigerator lend a little edge to the airy white range and tile-covered hood.

Marvin windows and French doors frame the living room, delivering more than just fresh air and natural light to the 18-foot-high space: They offer full sight lines of what’s happening out on the street and in the backyard by the firepit area (important for when Nolan is playing on either side).

Another key breezeway surrounded by glass windows connects the garage to the hardworking mudroom, which is lined with various lockers and a laundry cabinet. The long hallway prevents anyone from tracking muddy or snowy boots into the rest of the oak-clad home. Arranging the Swiffer-friendly floor tiles in a striped pattern was a simple way to elevate the utilitarian space—plus it helps tell a larger pattern story with the marble mosaic and mustard backsplash in the nearby powder room.

Just off the mudroom, behind the kitchen range wall, is a walk-through pantry (the doorless area makes it easy for Nolan to grab snacks on his own). But because the space is partially visible from the entryway, Hoekzema made the storage nook a statement moment, introducing a touch of architecture with arched shelving and naturally aging brass light fixtures that give it “a little richness without going over the top,” she notes.

Designating the second floor as Nolan’s (Megan and Dustin’s bedroom is on the ground level) was a decision made with longevity in mind. “There’s some space for us to all move around comfortably,” says Megan. As a way to bring additional character to the newly constructed space, Hoekzema clad Nolan’s ceiling in circus-tent–worthy stripes, mixing up the directions of the lines to spotlight the home’s unique rooflines. “It brings out a detailing you might find in older homes,” she says.

The zebra-pattern paper on the playroom ceiling lends a different visual effect. By framing the treatment with mustard-hued trim, the designer created a window into another world—one filled with wild animals. “It was also a budget decision,” she says of having to cover every square inch of the surface. The built-ins under the window offer a streamlined solution for storing Nolan’s bulkier toy trucks in baskets, plus the sunny hue helps distract from the fact that the window is offset. The low-sitting sofa was both a kid- and parent-friendly addition. “I knew I was going to be spending a lot of time in here as well, so I wanted a place where I could sit and hang,” says Megan.

While Nolan dozes off to safari adventures, Mom and Dad catch z’s in a cocoon-like oasis. Painting all four of their bedroom walls black makes the white ceiling seem almost like a giant cloud (especially with the multi-globe pendant lamp) and encourages sleep once their little one has gone to bed.

The Moons saved on small details (like using off-the-shelf hardware such as the leather Anthropologie pulls on the guest bathroom vanity) and splurged on the big entertaining moments, like the fully finished basement that’s complete with a wet bar and island. While the outdoor areas and main level work hard in the spring and summer months, having a lower-level space to retreat and get cozy during Michigan’s long winters was essential. “We also thought, as Nolan gets older and has friends over, they won’t be running up and down the stairs,” says Dustin. That’s one benefit of starting from scratch: There’s a space and solution for everyone.

Pattern in our home that is so us: The wallpaper in the main closet and the herringbone floors.

Object in our home that gets the most use: The Keurig!

The one thing we wish we knew before building: We had pretty realistic expectations. We planned for delays; however, no one could have predicted COVID and the challenges that would bring. Order your furniture way in advance.