For a Black Exterior That Lasts 80+ Years, Let Us Introduce You to This Japanese Technique

The eco-friendly finish looks great inside, too. 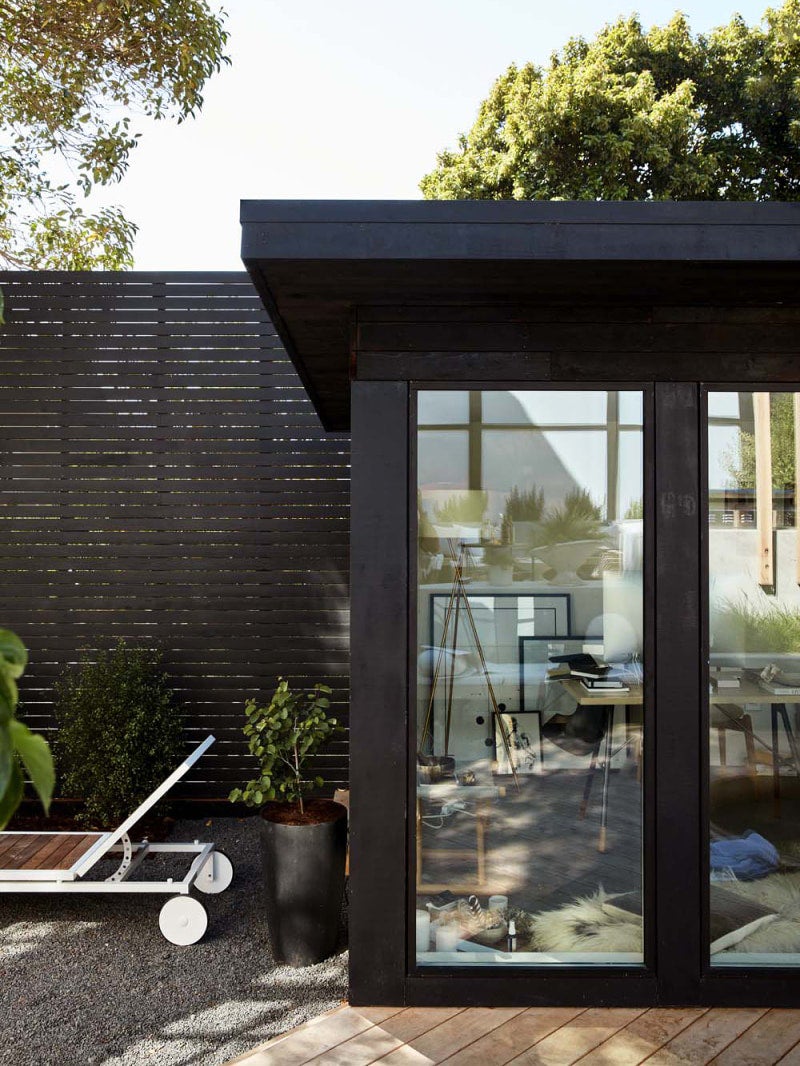 Good bones—that’s what everyone says to look for when shopping for a house. But while room proportion and window orientation are undeniably important, it can be hard to ignore crumbling stucco or turquoise vinyl siding—just ask Amber Lewis. The A-list designer knows the power of curb appeal, but she looked past the colorful 1950s interior of her Woodland Hills, California, bungalow, knowing a top-to-bottom renovation was in the cards eventually, and instead focused on the exterior, which she covered in beautiful stone and blackened reclaimed wood.

She isn’t the only one to have recently turned to a modern black lumber style for part of her exterior. Just before the pandemic hit, Erin Hiemstra built a home office in her backyard with charred cedarwood using shou sugi ban, a traditional Japanese technique that protects planks by burning them to create a protective layer that’s waterproof and rot-resistant. If treated properly, the finish can last 80 to 100 years.

In Japan, the material is also used as a protective layer against fire—charcoaled wood is thought to be harder to burn a second time. Today shou sugi ban is rising in popularity for its nontoxic appeal because it’s an environmentally friendly alternative to harsh stains and VOC-emitting exterior paints. It’s also something you can do yourself if you are a seasoned DIYer: Once the wood is cleaned and prepped, all you need is a blowtorch to create the darkened effect. Just dust off the char with a wire brush, then oil the surface to give it a protective coating.

The one caveat: It doesn’t work on all types of woods. Cedar and cypress are preferred for their porous nature, but homeowners have also had success with inexpensive pine. Whether you undertake the project yourself or hire a pro, here are a few spaces that’ll make you want to try the look.

Textile designer Aelfie Oudghiri opted for the Japanese technique on the exterior of her Long Island house at the suggestion of her father. The horizontal planks lend the two-story cottage a dramatic feel against the green grass and blue pool, and a charcoal metal roof and black window trim give the building a stark monochrome look.

Designer Delia Brennen was inspired by shou sugi ban for her Brooklyn townhouse—but “I wasn’t about to take a torch to my floors,” she admits. Luckily she found a chemical treatment that burns the wood but without fire. “It was straightforward but tedious,” says Brennen of the endeavor, which her husband tackled with two huge barrels of vinegar and Brillo pads.

Though the treatment is increasingly popular on indoor walls, it doesn’t have to cover the whole space. Interior designer Brigette Romanek proved it in a recent Malibu project, where she used shou sugi ban on a staircase and banister, creating a rustic diagonal feature in an otherwise white room. The angular effect fills the back wall while letting the furniture stand out.