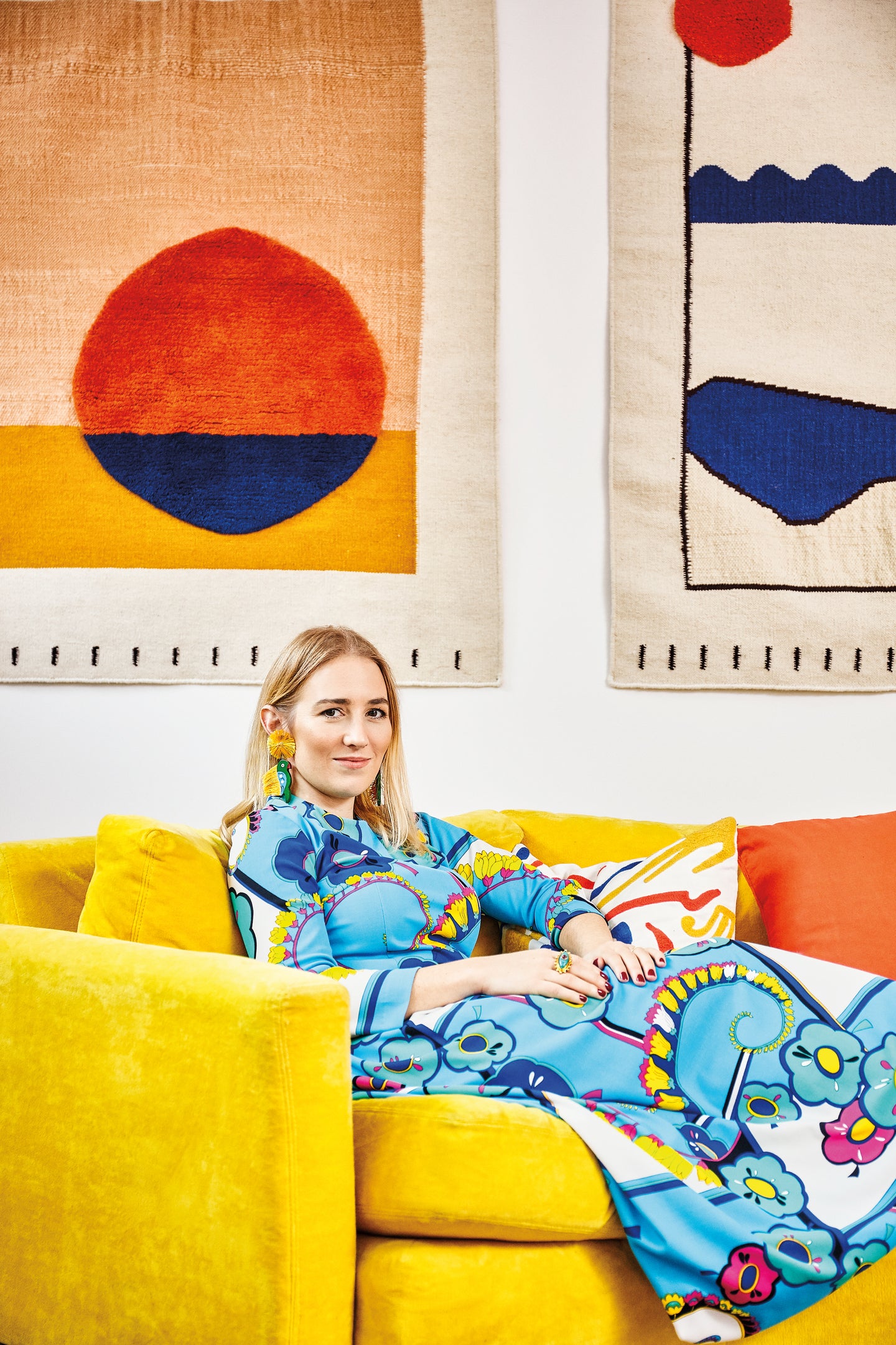 This story originally appeared in the Spring 2019 issue of Domino, titled “Coastal Cool.” Subscribe to be the first to receive each issue!

It may not look like it from the primary-hued woven wall hangings and lemon yellow velvet couch, but according to textile designer Aelfie Oudghiri, decorating her house on Long Island’s East End was an exercise in restraint. “Our home in Brooklyn is madness. There’s color everywhere,” says Oudghiri, who founded her eponymous home goods company in 2012. “I wanted this house to be colorful but peaceful.”

Oudghiri designed the Bridgehampton house from the ground up with her father, builder and developer Alfred P. Tuff. In 2016, she got wind of a deal, which she refers to as “an interesting, oddly shaped” piece of land in Bridgehampton that had two small, extremely run-down shacks on it that needed to be torn down. The description would have turned off most prospective buyers, but not Oudghiri. Her immediate reaction? “Let’s do it.”

The location had two big pluses: It was relatively close to her parents’ home in the nearby town of Springs, where she had spent most of her childhood, and her father was up for a project. “I’m such a better designer now because of working with my father,” she says. Throughout the endeavor, the two collaborated, first prioritizing her young family’s needs and then balancing Tuff’s decades of experience with Oudghiri’s bold creative vision. “He talked me out of open cabinets, and I talked him into more far-out ideas, like custom marble floors. It was an opportunity to clean things up and elevate my style—and bring a little fun to his style, too.”

After eight months, construction was complete on her two-story contemporary cottage. The exterior was finished in black wood thanks to a Japanese technique her father suggested called shou sugi ban, which chars wood to weatherproof it. The interior boasted a modern floor plan and architectural details inspired by her travels, especially to her husband’s native Morocco.

Oudghiri was eager to move in, but first she had to decorate. After endless conversations and countless hours of work on the structure, she felt compelled to focus on the bones of the house: “I didn’t want to distract from all the thought that went into the space itself.” She followed her father’s recommendation and painted the interior Decorator’s White. However, being true to the vivid color palettes and vibrant styles she’s known for—all that white was just a start. It gave her a blank slate to work with and allowed for key pieces to have an even bigger impact: a striking cobalt blue faucet in the kitchen, a lavender velvet headboard in the master bedroom, and marigold powder room walls.

Even while keeping her natural chromatic tendencies in check, color and texture began to surface in new and unexpected ways. There was little room for books in the couple’s Brooklyn home, but here the floor-to-ceiling shelves in the library were instantly brimming with their reading collection and treasures from their trips together.

Oudghiri began to experiment with stone and marble floors, designing a graphic black-and-white marble inlaid pattern inspired by Victor Vasarely, the Hungarian-French grandfather of the Optical Art movement, for the powder room, and re-creating one of her early carpet designs in pink quartz, green granite, black onyx, and other stones in the master bathroom. In wanting to pay homage to a large vintage print of a British garden that she and her husband had found at a thrift store in their early 20s, she opted for glass doors along the walls of the house that open onto the yard, flooding the living spaces with light and putting the verdant greens of the garden and the crystal-blue swimming pool on view.

“It was a fun, crazy challenge to learn how you move, live, and grow in a space. My taste is maturing, and working with my dad elevated it”

And when it came time to settle into their new digs, Oudghiri added a layer of personality and coziness by pulling from what she knows best: her namesake collection. In the main room, a large vintage rug anchors the white dining table and natural rattan chairs, while her soft pink and marigold Heat Wave in Rajasthan dhurrie defines the living room’s creamy white couch. Pillows and poufs make every seat in the house comfortable and inviting.

To find a bedspread to complement the guest bedroom’s richly pigmented, overdyed rug, Oudghiri dug deep into her archive, unearthing one of the first bedspreads her company ever produced. “This room was tricky,” she says. “We couldn’t quite make anything work, but once we put the bedspread down, the combination of the coral, blue, and royal purple really pulled things together.

With the first year behind them, Oudghiri looks back at the experience as a huge opportunity for growth. “It was a fun, crazy challenge to learn how you move, live, and grow in a space. My taste is maturing, and working with my dad elevated it,” she notes. But color will always be a part of her world. “It’s like talking about air or water,” she says. “It’s an important element. It’s more powerful than people realize.”

Forget About All-White: 13 Kitchen Colors You Should Definitely Try Instead This Historic Home Features the Most Vibrantly Colorful Interior I’m Leaving My Colorless Aesthetic in 2018—and Adopting This Bold Palette Instead