By Flipping the Kitchen and Guest Room, This Designer Made Both Bigger

Every trade-off was worth it in this NYC apartment. 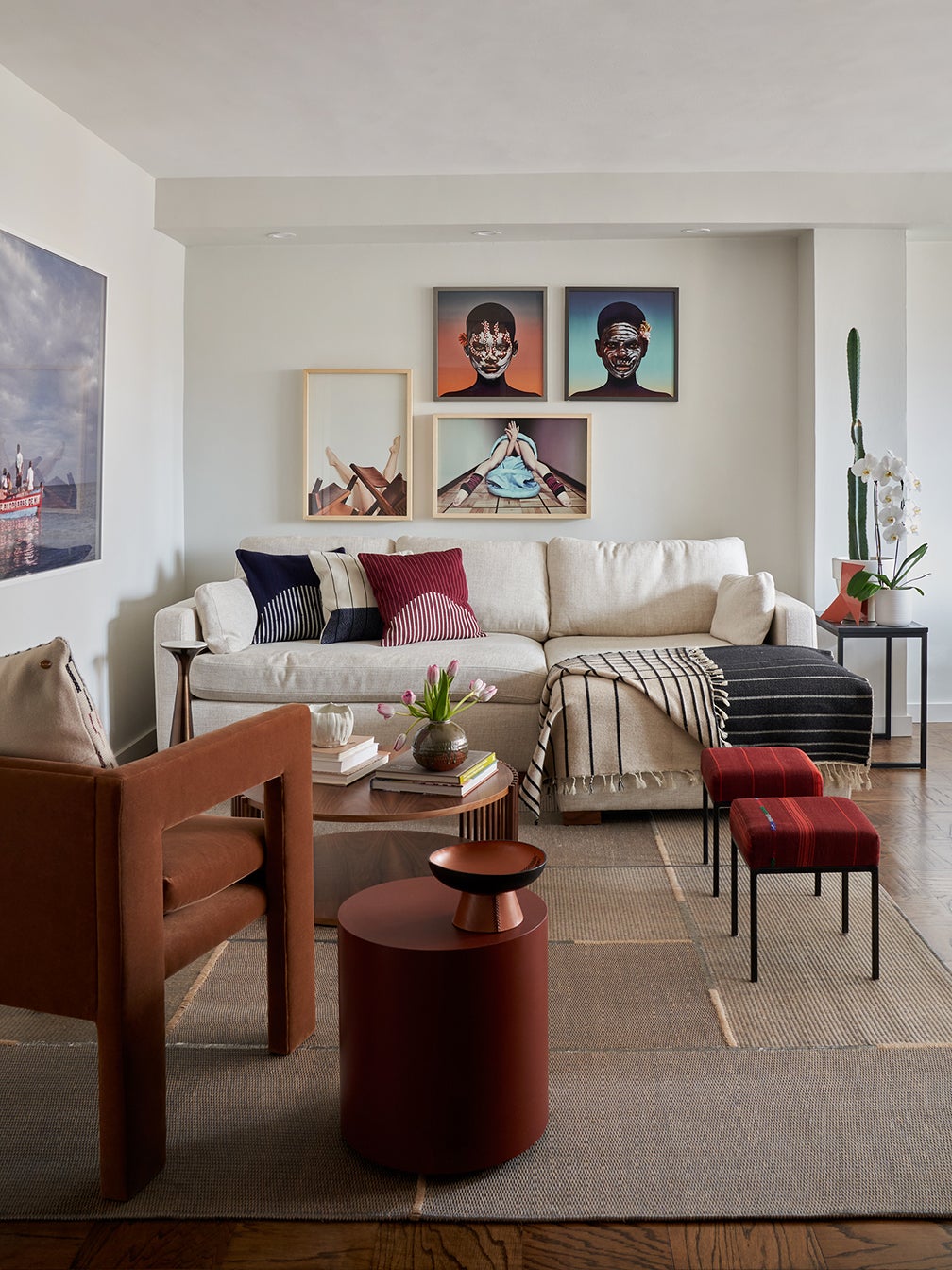 The first thing Silvana Vergara noticed when she walked into her apartment in Gramercy in 2018 was how the long hallways and pass-through dining nooks ate into the usable floor space. “It was sold as a two-bedroom, but the second one was so tiny you couldn’t even fit a twin bed,” says the Colombia-born interior designer, who moved to New York City five years ago to pursue an M.F.A. at Parsons School of Design.

Despite its quirks, the apartment checked a lot of boxes for Vergara and her husband, Brad Tobin: top-floor views, windows on both ends, and enough room to start a family. So they traded their quaint cobblestone streets in the West Village for a doorman building and stroller-friendly elevator on the opposite side of town. With a little tweaking, this place would suit them perfectly—it just required a bit of faith: “We bought it crossing our fingers that the board would approve what we wanted to do,” says Vergara.

A Game of Layout Tetris

Their proposed floor plan rework included flipping the existing kitchen and “flex bedroom” to create an open-plan layout connected to the living area, a shift that increased the square footage of both rooms. The board couldn’t say no to that. Because the dividing wall between the two spaces held all the plumbing and gas lines, Vergara kept the appliances and sink in place, saving hundreds in the process. Still the designer had to accommodate an angled window wall in the new kitchen. Narrow shelves at the end of the counter meant she could run it all the way to the wall and maximize every inch of storage.

Overhead light fixtures were part of the new dining room scheme—until Vergara realized the ceiling was made of concrete. Her fix: a long swing-arm sconce that could reach from the wall almost to the center of the table. “My husband has a very big family, so I wanted to be able to accommodate eight people,” she says. By pushing the table against the wall, the glow can reach the additional seating.

When standing in the entryway, “I wasn’t so happy about the fact that the living room is right in your face,” Vergara explains. Alabaster sconces, which flank a tapestry she bought on her last day at Parsons, create a focal point without taking up much floor space. “Every day I would walk by this artist’s studio, and I loved her work,” she says. “When I was graduating, I stopped by and said: ‘I have to have one of your pieces.’”

The living area beyond came together out of two necessities: Vergara didn’t want the TV to be visible when people walked in (which dictated where the sofa went) and she needed the walkway to the kitchen to be unobstructed (enter the small stools that divide the area). A rug and pillows designed by Vergara herself—she owns textiles brand Gres back home—as well as art from her native Colombia give the designer a sense of place in the middle of the city.

A Paint Color by Way of Paris

On the other side of the apartment, Vergara painted the main bedroom in a French blue she picked while in Paris. “The painter called and said he needed me to send the color right away,” says the designer. She happened to be staying at an apartment that had the exact shade of blue she was picturing; she didn’t give it another thought.

The apartment’s only bathroom, adjacent to a linen closet, felt dark and cramped, so Vergara again doubled the square footage by dividing the rooms into two areas: the shower and toilet stayed in the original footprint while a double vanity took over the neighboring space. “Now it’s really comfortable because someone can be brushing their teeth while someone else is showering in a separate room,” she explains. Even a few extra feet can make the heart grow fonder.

Favorite source for plants: The Sill.

The thing in my home that gives me the most joy: Scented candles. It gives my space a sense of calm and relaxation, and works as aromatherapy.

The object in my home that gets the most use: Our French press.

My biggest splurge: We got a customized chair at TRNK for the living room.

This textile is so me: Shameless self-plug, but I design and produce home textiles through my company GRES.

I loved working with: Daniele Busca from Scavolini. He was super helpful in working within our budget and our needs. We were really happy with the finished product in both the kitchen and bathroom.

The nicest contractor I’ve ever met: Onofrio ¨Danny¨ Argento and his team took care of every aspect of the construction process and made it very seamless.