A bold carpet swatch started it all. 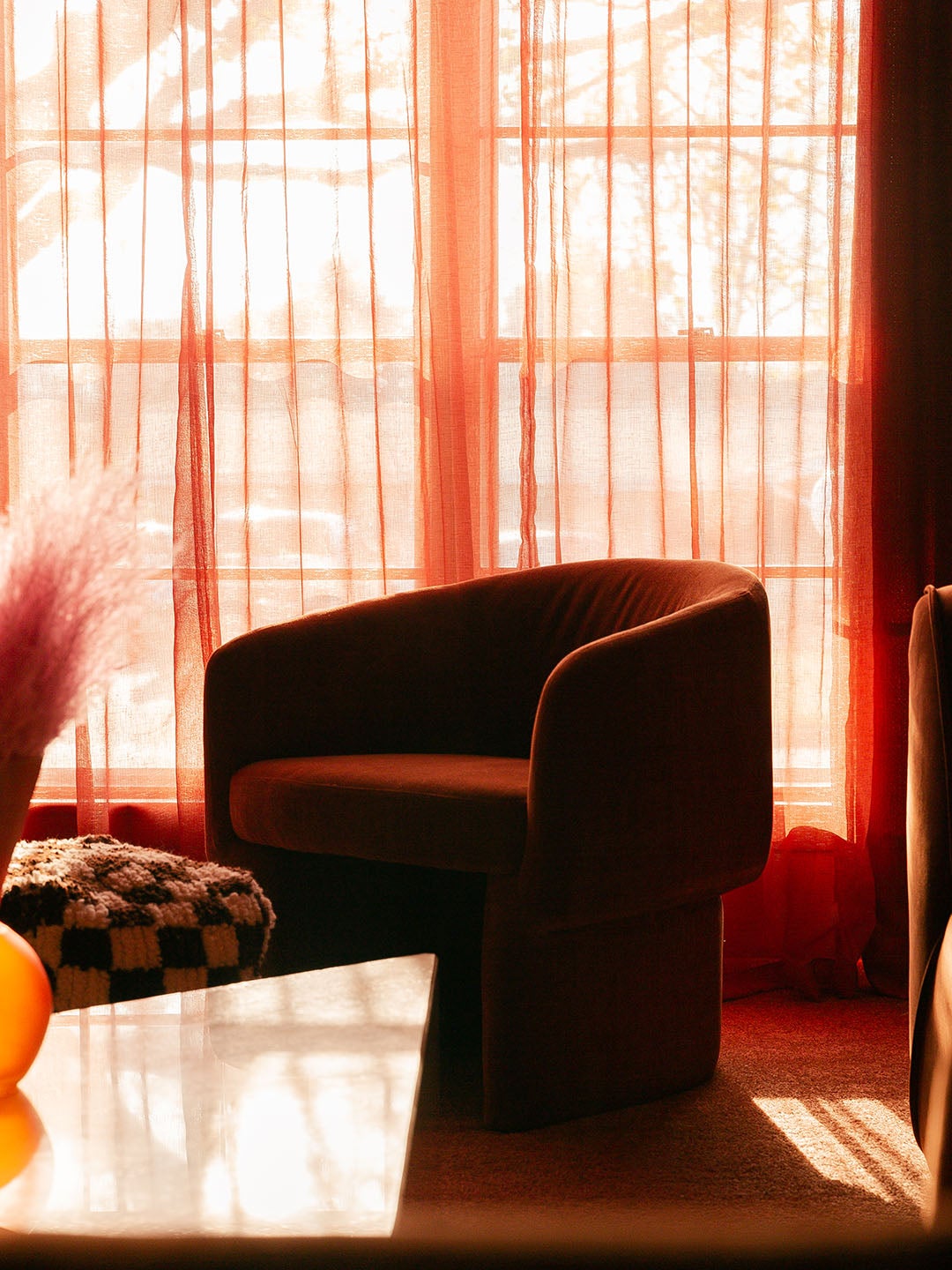 “My favorite uniform in life is wearing monochrome,” says A.B. Lafitte. Pink on pink, yellow on yellow—the bolder, the better. “It’s my safe space,” she adds. The designer, who branched out from Los Angeles–based firm Bells & Whistles to start her own practice in her hometown of Tulsa, Oklahoma, last year, treats her mid-century modern home like her closet. In the small den she and her husband have designated as a media–slash–coffee room, nearly every last detail is red.

“The house was built in 1962 by some risk-taking suburbanites,” explains Lafitte. “I wanted to highlight the best of that design era.” What better way to do that than to replace the old greige, peppery wall-to-wall carpet with a tangerine version—a choice that ultimately shaped the rest of the room and determined the fiery palette. “When you go into a carpet showroom, it’s literally 1,000 different beiges. I don’t know how anyone picks anything,” says Lafitte. It took some digging to find a local company (Johnson Carpet One) that offered some more colorful options. Covering the ground with an ultrasoft treatment instantly set the scene for cocktail parties, movie binges, and early-morning conversations. Ahead, Lafitte shares how she made the allover scheme feel modern.

After landing on the orangey red carpeting, Lafitte set out to find a matching paint color. “One thing I can’t stand is white trim,” says the designer of her decision to swathe the molding, ceiling, and even AC vents in the same shade that she used on all four walls (it’s Baked Clay by Sherwin-Williams). While it created the immersive environment she was after, the mood changes significantly over the course of 24 hours. In the evenings, when the sun hits the space at a low angle, the room appears almost merigold. But at 5 a.m. on overcast days, it looks more like a muted terracotta.

Wanting to commit to the dramatic mood she was setting with the palette, Lafitte brought in sculptural furniture pieces—think: organic silhouettes that could easily live in a groovy sunken living room from the ’60s. The velvet sofa and coordinating chenille armchairs (her biggest splurge) are both from Nuevo Living. The pleated lampshades are a Lamps Plus score.

Opting for custom drapery would have cost thousands of dollars, so Lafitte took the job upon herself and sewed pleating tape on the back of premade curtains from Half Price Drapes. Then she bought a ceiling track to make it look like a professional installer hung them. “It was life changing,” she says.

Any accents that weren’t red needed to pack a punch, “or else they would just disappear,” explains Lafitte. “That’s where the black and white came in.” Anchoring the room is the travertine coffee table ($20 on Craigslist), two checkerboard poufs from Morocco (her cat’s and dog’s favorite nap spots), and a series of prints from Paper Collective.

The large floral painting on the wall had been left behind by the home’s previous owners in this exact room. Originally the background was a taupe-y beige color, so Lafitte brought it up to speed with a coat of black. “I felt like its soul lived in this space,” she says. “We love being in this room, in every shade of orange and red, at every time of day.”