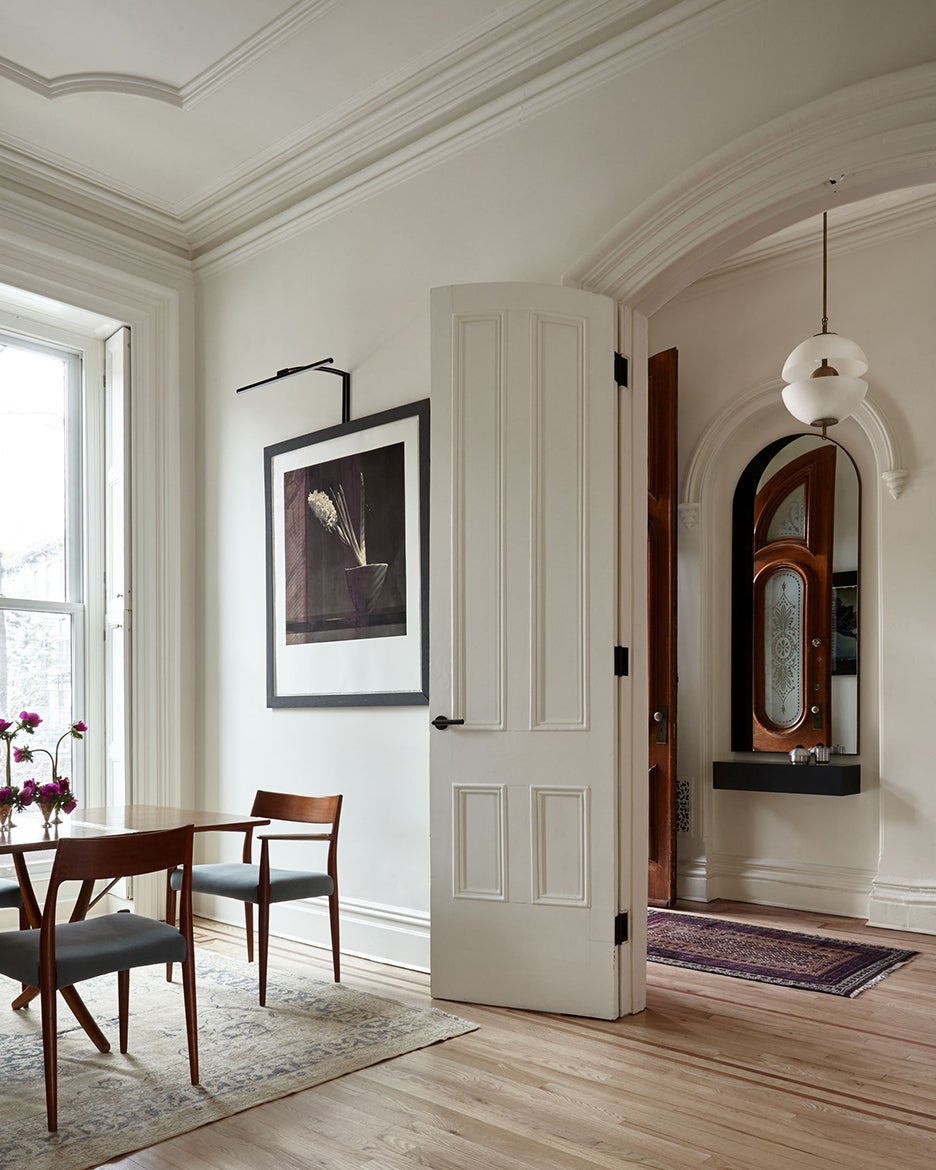 Camilla Gale and Zach Aarons had never lived in a stand-alone house before 2007. So when the two Manhattan-born then-20-somethings—who had grown up in apartment buildings their entire lives—made the move to Brooklyn and bought a brownstone, a renovation was the last thing on their minds. “We needed to really spend some time to understand how we would be living here,” explains Aarons.

The couple was content with the fact that their 19th-century Italianate house was a block from Fort Greene Park and a short walk from Gale’s former fashion boutique, Thistle & Clover. Fast-forward to having a few kids (Rhyse, 9, Wes, 5, and Margot, 2) and, suddenly, the pokey downstairs layout and lack of storage or natural light no longer made sense. Not to mention that a painting made out of bubblegum, a gift from Aarons’s mother that hung on the top floor under a skylight, had melted in the summer heat. If nothing else, they urgently needed central air.

The couple tasked Alan Barlis and Liza Paredes of BarlisWedlick with the remodel and, from the moment they first walked in, one thing was clear: The powder room that blocked access to the kitchen from the entryway (a late-20th-century addition) had to go. Removing it would restore the original flow of the house, allow the still-existing crown moldings to shine, and bring in a ton of light. But Gale, who was expecting her second child at the time, wasn’t so convinced. “I was pretty adamant that I didn’t want to be pregnant running up and down the stairs to use the bathroom,” she remembers.

Barlis’s solution: tucking the powder room into what looks like an extra-deep cabinet next to the stove. This allowed him to open up the entire back of the house and turn it into a large eat-in kitchen that now looks out onto the backyard.

“I wanted a really big island where we could eat and gather.”—Camilla Gale

“When we realized that we were going to be ringing the whole room with millwork, we wanted strategies to break it down in scale,” explains Barlis. To divide the kitchen into zones, the architect switched up the materials: The four corner cupboards are built out of white oak, while the utilitarian areas (the stove, refrigerator, and island) are painted a blue-gray tone. For the same reason, he built in the cabinets on the cooking side but left the ones on the eat-in side floating on each side of the original mantel. “It references the notion of freestanding pieces found in the rest of the house,” he says.

A Bookcase With a Cause

Barlis and Paredes also departed from the typical parlor floor layout in the living room by not centering any seating around the fireplace. Instead they laid out the dining room by the front windows—“We already had eat-in seating around the island, so we wanted it further away,” says Barlis—and used the narrower pass-through area at the back to build a library–meets–TV nook. Gale asked for lots and lots of shelves: “I’m a pretty intense reader, and I don’t Marie Kondo my books.”

The wall-to-wall bookcases also serve a hidden purpose: hiding a mudroom of sorts. The entryway was too narrow for a formal coat closet, so Barlis imagined a wall of storage doors that are flush with the wall the space shares with the living room. The extra-deep built-in on the other side houses wardrobes of boots, backpacks, and jackets. “Our ceilings are high enough that even with these storage units, nothing really feels cramped,” explains Gale.

A Different Kind of Island

Upstairs, the blueprints stayed largely the same, save for a randomly placed hallway that Barlis reimagined into one large dressing area in the main bedroom. “Before the renovation, they had been using a room up on the third floor as out-of-season-clothes storage,” he remembers; the new spot was much more convenient. To keep the Italianate details as intact as possible, he kept a large gap between the top of the cabinetry and the ceiling to highlight the original architecture. Similar to downstairs, the space is delineated with planks of white oak and anchored by a large island, but this time for folding sweaters. “It’s not something I had ever had before, but it’s so useful,” says Gale.

An All-Important (but Invisible) Upgrade

Both bathrooms got quick cosmetic upgrades with clean white subway tile, giraffe wallpaper for the kids, and a large freestanding tub for the parents, while the old top-floor closet became a home office. Without a doubt, though, the most impactful transformation was the ductless air-conditioning units that keep both humans and chewing-gum artworks cool. Between this and a kitchen that fully opens up to the yard, the house is now enjoyable year-round. “In the summertime, we eat on the porch directly outside the doors,” says Gale. For a first-ever house, this one takes the cake.

The thing in my home that gives me the most joy: My tea kettle.

The object in my home that gets the most use: Our washing machine!

This pattern is so me: The gorgeous wildflowers wallpaper in our powder room my friend Emily Johnson designed.

One thing I wish I knew before renovating: That the back wall we ultimately blew out was filled with hollow bricks.

If I could go back in time, I’d: Purchase round sinks instead of square ones (they’re easier to clean), and not insist on having wall-mounted toilets (they were too heavy for our walls and had to be mounted so high our feet dangle from them).