They give the newly built bones some edge. 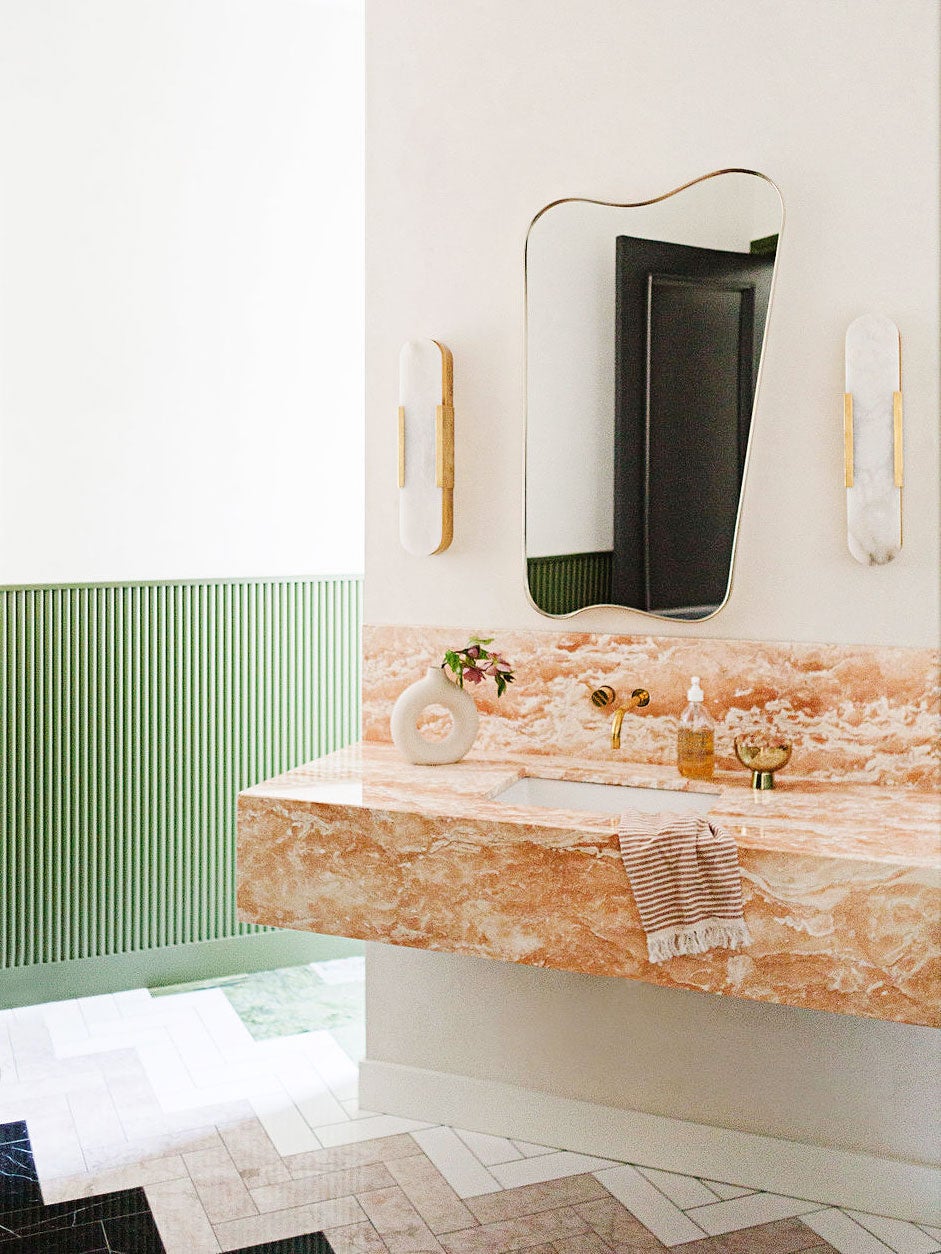 An atrium wasn’t in the original plan for Rebecca Mclean and her husband, Brad, who bought a plot of land in Alberta, Canada, eight years ago with the intention of building their family’s home from the ground up. But once the construction phase started inching closer, “I was thinking secretly in my head where I could stick this thing,” Mclean recalls. Plopping the sun-filled, glass enclosure right off the large foyer turned out to be the perfect fit, even though it meant some serious engineering changes (the trusses needed to be moved around). “It took some convincing for my husband, but now he loves it,” she says. “It was worth the challenge.”

Designers Shannon McClelland and Brianna Hughes, cofounders of Ministry of Interiors, came on the scene to help make sure the 8,000-square-foot new build didn’t feel cookie-cutter. One way they infused the fresh bones with character? Drawing on old-world European design.

They juxtaposed some of the time-tested elements, like the wrought-iron black doors, with moments such as the funky powder bathroom’s reeded wainscoting (painted in Farrow & Ball’s Bancha green), pink stone vanity, and Technicolor marble herringbone floors. “It gives it that modern twist,” suggests Hughes.

Mclean wanted a classic kitchen that felt rich, timeless, and a touch French—cue the matte black cabinet and thin door profiles. “Because this space is so open, it gives some heft and depth to it,” says Hughes of finding an anchor for the modern, airy floor plan. Mclean immediately put her name on the slabs of Calacatta Paonazzo marble (used for the countertops, island, range hood, and backsplash) when she spotted them at the stone yard.

The living and dining area is naturally lit from the south-facing, floor-to-ceiling, double-height windows. But another feature helps bring the outdoors in: the limestone wall, which is the same siding found on the exterior of the home. The porcelain Bocci light fixtures that drip down the stairs soften the look of the cold rocks. The fireplace is coated in a clay finish to add an extra organic touch.

Separate from the fact that it offers access to the outdoors and lets in plenty of light via the windows, the lower level of the home isn’t your typical basement. To start, the La-Z-Boy furniture–free media zone is clad in black porcelain terrazzo tiles from Julian. “It’s nice to have a TV on a black wall so it blends in a bit more,” notes McClelland.

Another dramatic focal point is the soapstone island in the bar–slash–secondary kitchen, complete with a fish-scale tile backsplash. On the other side of the wall, opposite the sink, is the movie theater, where a fair amount of sports watching happens. “You can leave the sliding doors open so people at the counter having drinks can still be watching the game,” says Mclean.

The designers opted for rich color once again in the main bedroom, but the walls aren’t the same straightforward black that’s in the kitchen—they’re Benjamin Moore’s Salamander green. “It adds a layer of playfulness,” says Hughes of the nontraditional choice. The ceiling and molding are also covered in the hue so it “really envelops you,” notes McClelland. Thanks to the massive windows and sheer size of the room, it doesn’t completely overwhelm.

Mclean’s 9-year-old and 7-year-old’s shared bedroom strikes a lighter note with a decorative rock wall, which the homeowner herself had her carpenter build, and a lofted play space. “They have a little couch and table up there,” she says. “It’s basically dinosaur land. They play there all day.” No detail was overlooked in the kids’ bathroom, which features a falling block tile design by Clé called Diamond Twist that subtly recalls the climbing feature in the next room. The designers mixed in hits of white to balance out the blue (peep the terrazzo shower wall and crisp matte plumbing fixtures). “It makes it more modern,” explains Hughes.

If there’s one thing Mclean learned from the lengthy construction and design process, it’s to stick with your gut from the get-go—mostly because it will keep your timeline on track. “When people would make suggestions, I’d be like, oh, I don’t know, I’ll have to think about it,” she recalls. “I’d always circle back to that original decision.” In other words, don’t overthink it.