This Couple Turned Their Master Bedroom Into an Emerald Green Bathroom

Herringbone and hexagons are a match made in heaven. 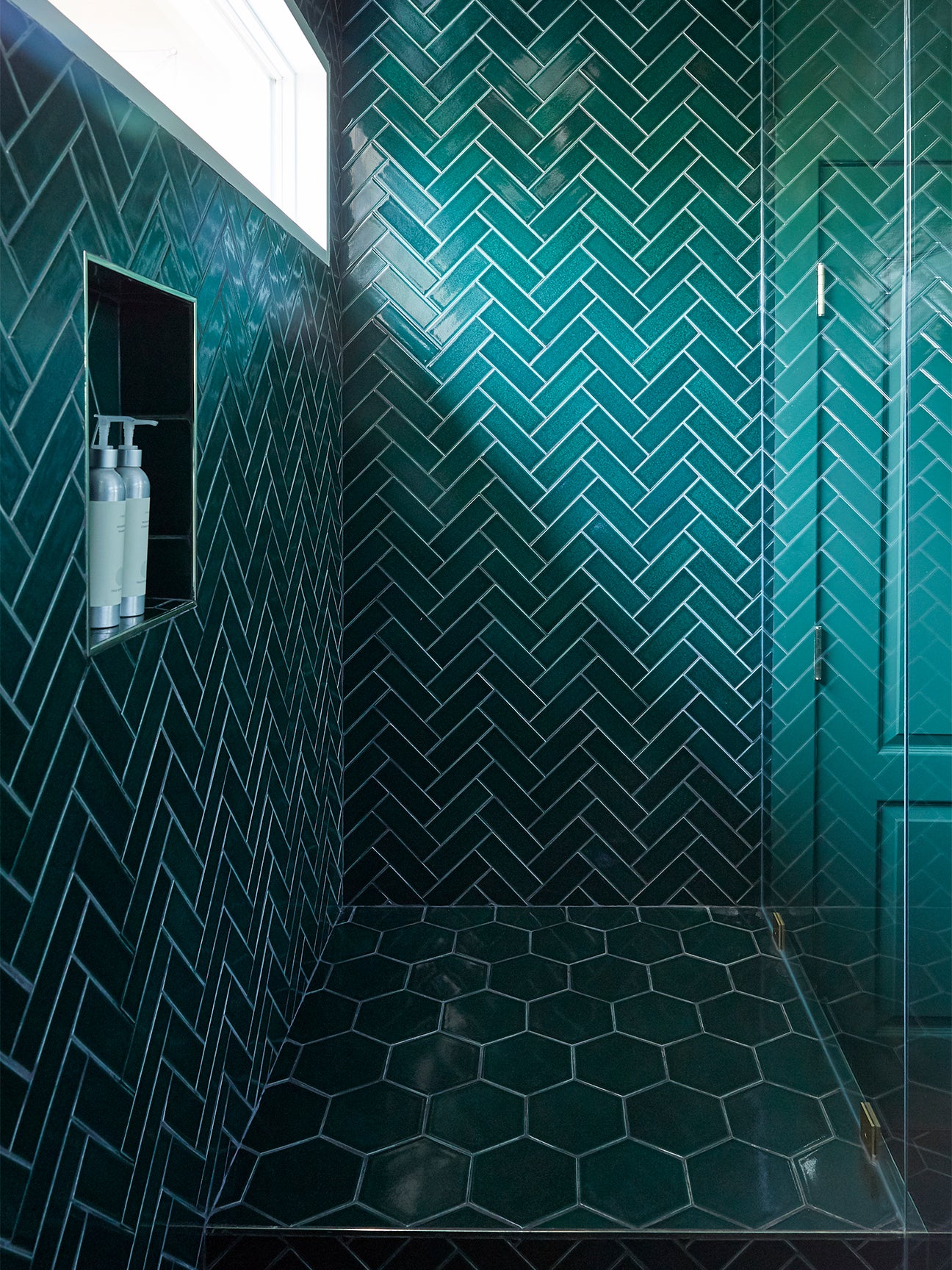 You know the intoxicating smell of a new car’s pristine interior, the thrill of the very first spin? Sweet Laurel cofounders Laurel Gallucci and Claire Thomas experienced a similar sensation when they saw Gallucci’s brand-new shower. “We sat there (with our clothes on!) and took the built-in speakers for a test-drive,” jokes Thomas, whom Gallucci tasked with executing the design of her Los Angeles remodel.

When Laurel and her husband, Nick, bought their fixer-upper, one of the first things they did was split the old master bedroom into a laundry room and master bath. Switching up the layout gave the soon-to-be-parents-of-two a lot more square footage to play with. “We’ve always shared a sink, which didn’t pose any threats to our marriage, but two is nice to have,” says Laurel of the addition. Another feature that used to soak up space: Laurel’s freestanding infrared sauna. This time around, they integrated a system into the sealed-off shower and added a spacious bench to lounge on during eucalyptus oil–scented steams.

That’s where the sound system came in—the only thing missing from their ultimate escape was good acoustics. In case you were wondering, Laurel’s playlist mostly consists of calming sounds and classical tunes. Nick, a former audiophile with multiple car stereo competition wins under his belt, prefers anything with a strong bass line.

“It was fun for him to design because the shower is almost the size of a car,” says Laurel. “You can bump the music as loud as you want without anyone else really hearing.”

Nick, who works as a sustainability engineer, also honed in on amenities like heated floors and a tricked-out Toto toilet that, according to Thomas, “basically does your taxes,” while Laurel and Thomas focused on nailing down the palette. “It’s like spring in the English countryside,” shares Thomas of the floor-to-ceiling emerald green, a hue inspired by Laurel’s love of all things Old Hollywood and Art Deco. For maximum impact, they covered every surface in the color, using Dunn-Edwards’s Mission Jewel paint for the walls and ceilings and a mix of Fireclay’s hexagon and herringbone tiles in Venetian Green for the shower interior.

advertisement
“You can bump the music as loud as you want without anyone else really hearing.”—Laurel Gallucci

“When a room is monochromatic, you have to bring in texture from other places,” the designer explains. “Pattern is an easy way to do that.” Hence the tile combo (there’s another orientation of the herringbone on the stall’s ceiling), which Thomas says works because both of the shapes are timeless. The whole installation took a month to complete; fortunately, the “tile guy was a perfectionist,” Laurel says, laughing.

Both on the taller side, the couple made sure the one window in the room cleared their heads so that they could see the sky and trees but others couldn’t peek in. Add in two oversize round mirrors, and the bathroom is washed in natural light. “People fear that a dark room without a lot of light will feel like a cave, but I tend to find that when you choose something really rich and go big with it, it makes the space feel more expansive,” says Thomas. This shade certainly strikes the right note.

See more stories like this: You Can Watch the Sunset From This Totally Open Terrazzo Shower Turn Your Bathroom Into a Mini Jungle With These Shower-Friendly Plants Skip the Pricey Bathroom Remodel and Make These Easy Upgrades Instead