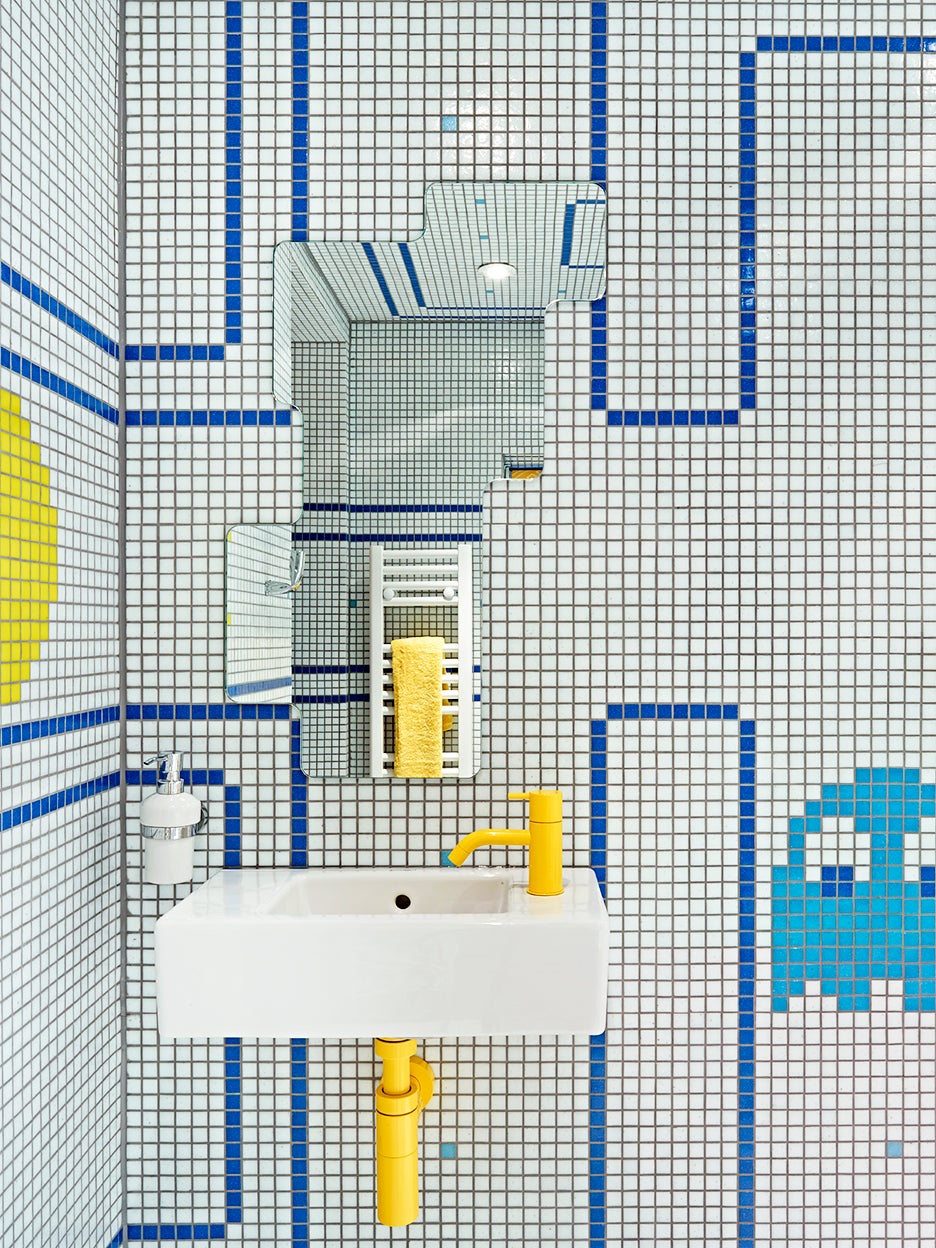 There are fewer things that could make a teenage boy happier than letting him live in his favorite video game. It might sound like an impossible feat, but U.K.-based designer Clare Gaskin found a way to make it happen. Tasked with turning a Georgian lodge on the outskirts of London into a fun house for a family with two children, Gaskin took the client’s inspiration (fantastical spaces such as the neon extravaganza of Burning Man and Tokyo’s Robot Restaurant) and funneled them into an intergalactic game room for their 16-year-old son. Connected to the graffiti-clad hangout space is a Pac-Man–themed bathroom that looks light-years away from when it did when the designer started work on the project.

“Playfulness was the motto,” says Gaskin. She drew on the space invader vibe going on in the adjacent den and covered the 40-square-foot bathroom (once your basic white space with large square floor tiles, a tiny vanity, and a built-in tub) in mosaic tiles, from floor to ceiling. “We wanted the surprise to continue,” she adds. Ahead, Gaskin shows us how she translated the iconic arcade game onto all surfaces.

Start With a Detailed Model

Gaskin called on Bathroom Mania, a tile supplier based out of the Netherlands, to come up with basic 3-D models of the design and deliver the sheets of tiny mosaic squares. “They were labeled so that our incredible tiler could follow a paint-by-numbers sort of system,” says Gaskin. Having carefully drawn-on plans was crucial—between the maze paths, colored ghosts, and cherries. While the designer notes this highly intricate layout wasn’t necessarily cheap (it took 10 days to install the whole thing), you can snag plain white 12-by-12-inch sheets for less than $30.

Gaskin ended up tweaking the illustration slightly during the process so that the pieces extended into the window recess and door thresholds. Luckily she had ordered additional white tiles in the very beginning. The design also wouldn’t have appeared so realistic had she stopped at the ceiling. “I think it completes the look and feels relevant to a computer game theme,” she says.

Be Bold With Your Fixture Choices, Too

To really get the most impact out of the tilework, Gaskin splurged on bright yellow fixtures (showerhead, handles, and sink faucet) from Vola. “Color was a really big thing on this project,” she says. The quality pieces feature contemporary lines, which play nicely with the grid-like walls.

The mirror over the sink, which looks like one of the mazes in the game, was custom-designed by Patrick Ireland. Surprisingly it was one of the saves on the project: The bespoke piece was more affordable compared to anything she could find at the market at the time. The chase is worth it in the end.