And it’s got a matching bathroom, to boot. 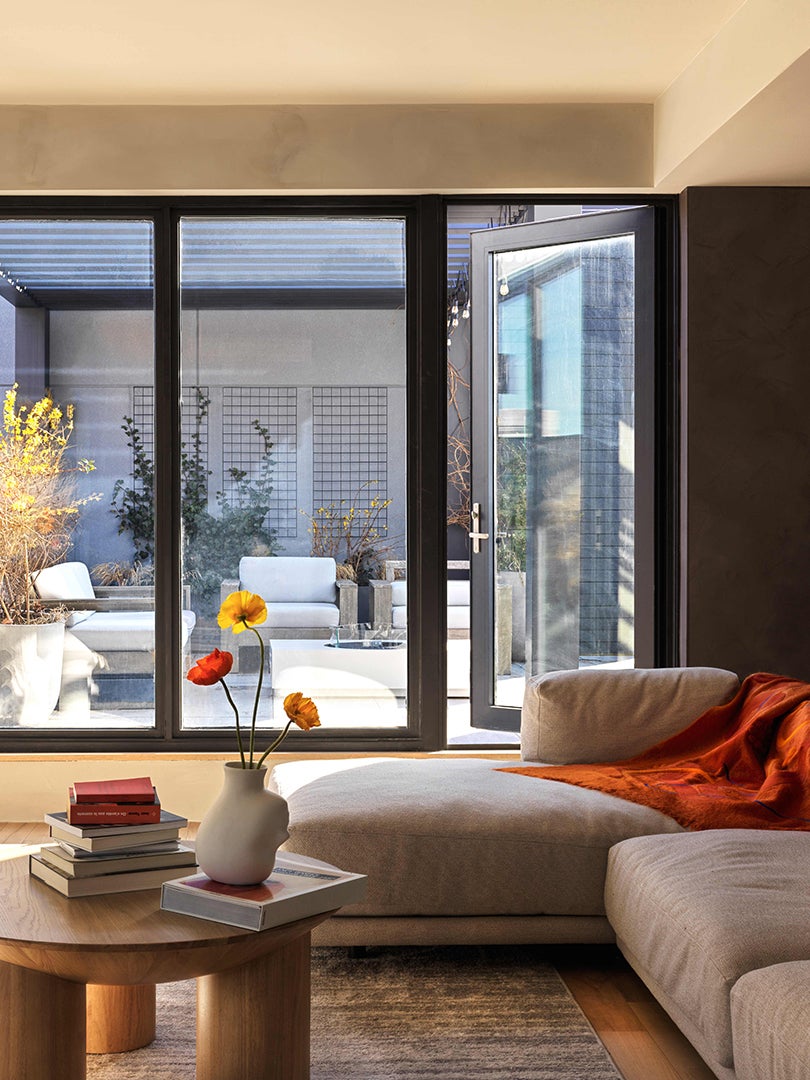 Multidisciplinary film director and visual artist Loïc Maes, who has worked with the likes of Beyoncé, Lady Gaga, and Tom Ford, has an eye for detail. Most of the time that involves zooming in on a screen and retouching people in postproduction. But in the case of his 1,600-square-foot, two-bedroom penthouse in New York’s West Harlem neighborhood, it meant swathing the walls in textured limewash paint and wrapping the walk-in closet and soffit in triple-layer wood. “I think of it as stripped down of as many unnecessary conventional details as possible,” says Maes. “Beauty and peace to me come from empty space around a few focal points.”

Maes tasked architecture firm Re-ad with turning the then builder-grade apartment into an uncluttered respite where he can rest and entertain in between projects and a hectic schedule. Fortunately Côme Ménage, founder of the NYC, Paris, and Miami-based firm, enjoys making the most out of a minimal aesthetic. “It was more about working with texture and creating an atmosphere than decoration,” says Ménage. Studying up on Moroccan bath houses and scrapping all overhead recessed lighting helped Re-ad achieve the resulting monochromatic yet dramatic home.

While few walls needed to be moved around, it was important to Maes to open up the corridor, getting rid of a “convoluted, unnecessary corner” that blocked light from reaching the elevator entrance, he says. “I wanted to simplify the layout.” The finishes were the major eyesore (picture fake wood laminate tile in the kitchen). Re-ad replaced all the doors with frameless options and eliminated the baseboards. 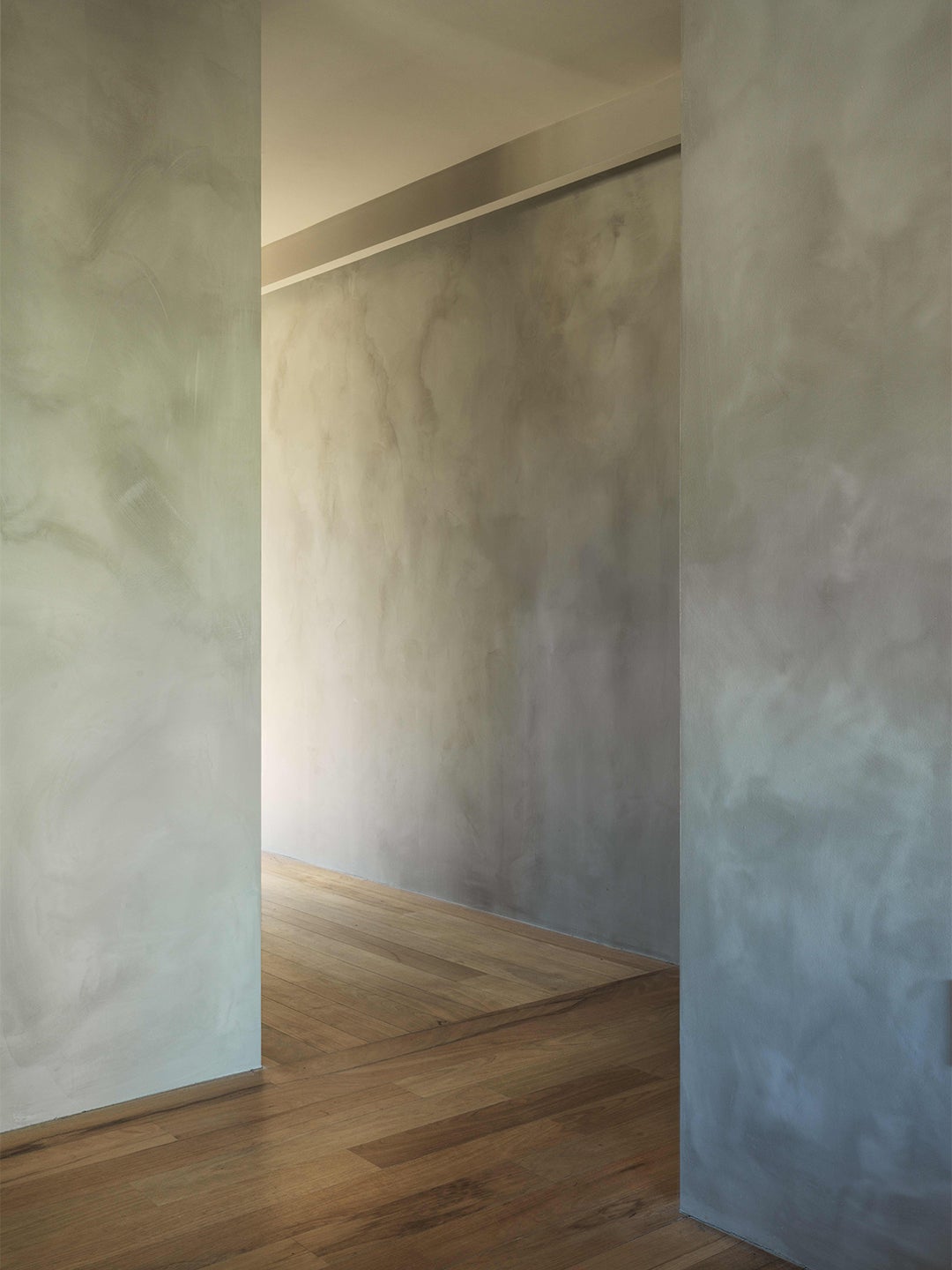 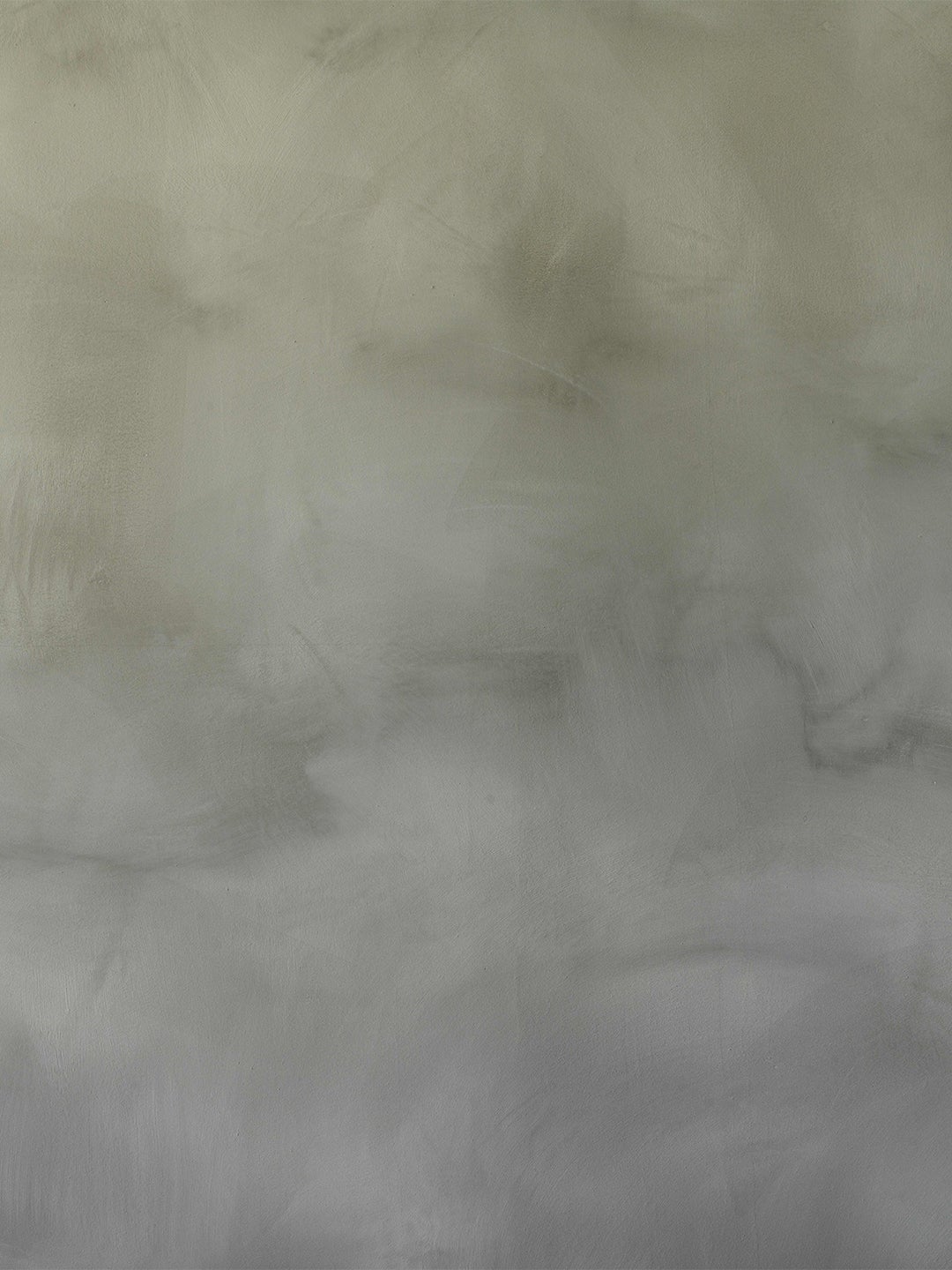 Nearly all the walls are covered in limewash paint made by a French company called Ressource Paints. The product was more affordable than Venetian plaster and offered flexibility in terms of playing around with the texture. “You can choose a more linear movement; you can go with a more cloudy look,” explains Ménage. Maes had villas in Belgium and Spain in mind when selecting the soft, organic finish, so they opted for the latter aesthetic.

The treatment was applied to the bedroom, halls, and living room in thick and thin layers to achieve a dappled effect. But just like any other type of paint, it will show scuffs, which, in some cases, isn’t all that bad. “It changes how it moves,” says the architect.

The warm woods and bright linen fabrics in the earth-toned living room shine because they’re right next to a superdark kitchen. “At times it’s great to have a point of contrast,” says Ménage. But the space isn’t just made up of flat blacks. In fact the millwork, designed by GD Arredamenti, is actually a deep blue; the backsplash is a shiny porcelain tile with veining; and the walls are swathed in the matte limewash paint. The palette is simple while still being rich. “There are a lot of variations,” he explains. Concealing the vent hood within the ceiling and opting for a dining table in the place of an island (it can double as extra prep space) make the kitchen as hardworking as it is good-looking.

Re-ad approached the bathroom with a similar monochromatic mindset: different tones of black lend a sense of depth. “Maes is seeing colors all day, so he wanted something peaceful. That’s when we got the idea for this black wet room,” says Ménage. This time around, Re-ad went with Moroccan tadelakt for the walls (or a waterproof version of the limewash treatment that appears elsewhere). The floors are stained concrete by Concretestudio7; the ceiling (not pictured) is painted a medium gray hue; and the dark millwork under the sink is actually a slightly different shade than the wall of cabinetry. Rounding out all the soft and matte textures? Shiny hardware from Kholer’s Vibrant Titanium series. “The sun moves very differently on all those elements,” he notes. Light, camera, action.