To Splurge on Burgundy Marble, This Renovator Saved on Her Kitchen Wall Treatment

The first-timer sourced almost everything online. 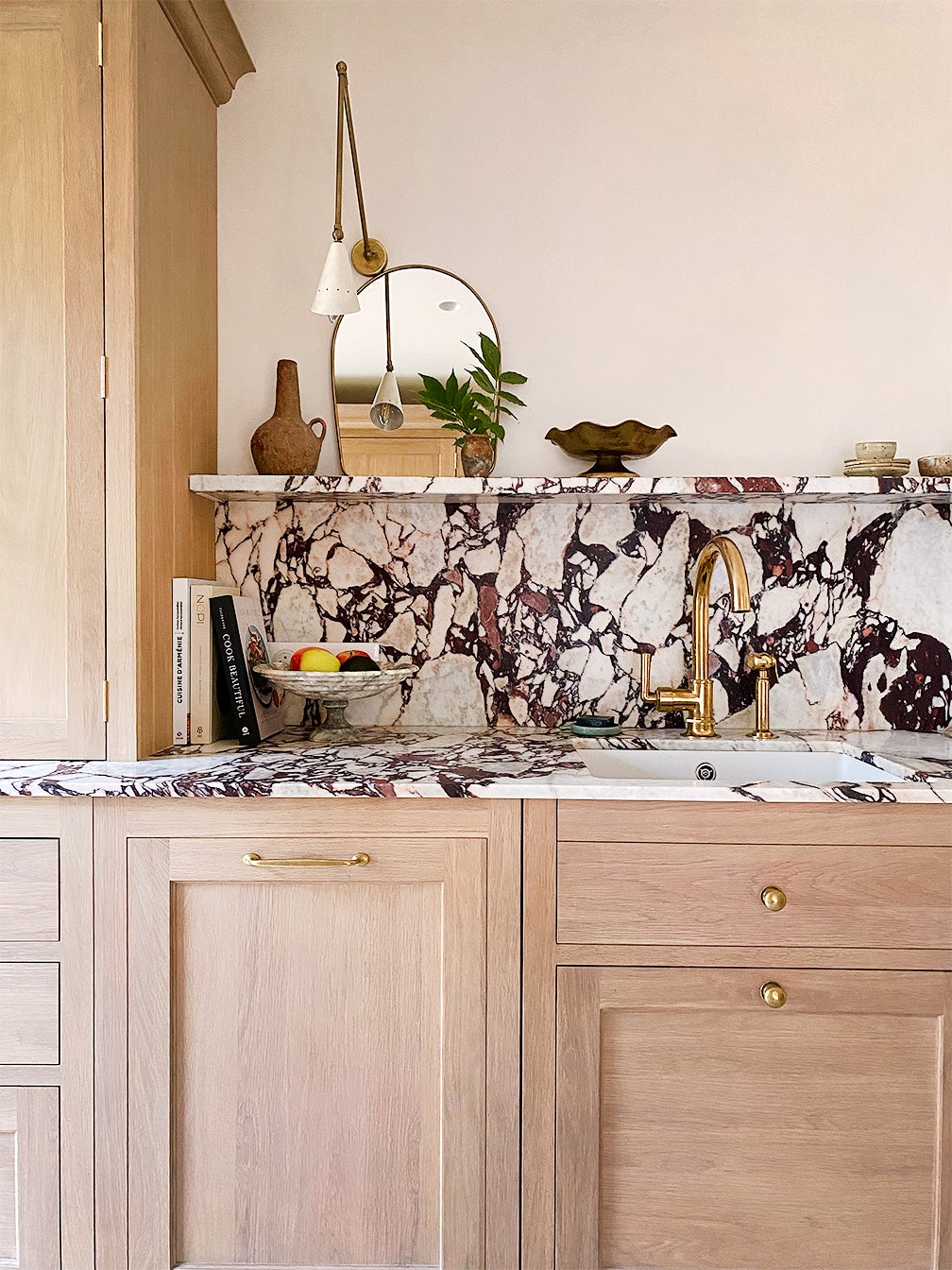 Becca Loyer and her husband, Michael, bounced around a lot in the past decade. She and the France native met in Illinois, where she grew up and he was temporarily living for work, more than ten years ago. Michael’s job took them to Geneva, then Marrakech, and Amsterdam. Last January, two kids (and one Moroccan rug company, June & Blue) later, the family relocated once more, to a French suburb back near Geneva. This time they knew it was for the long haul. Their renting days were over.

While still living in the Netherlands, the pair made house-scouting trips to Switzerland, focusing their search on three small villages on Lac Lémans known for their historic buildings. “We had friends in the area and it was a nonnegotiable for me to buy an old home because of the area’s charm,” explains Becca. Few properties were for sale—except for one house with a very sad, dark, ’70s kitchen that had sat on the market for two years. “The whole thing was a brown cave, basically,” she says.

Despite the floor-to-ceiling faux terracotta tiles and harsh neon under-cabinet lighting, Becca was already in love. She had known this was the house as soon as she turned the corner onto the picture-perfect cobblestone street. In March, when the couple finally got the keys and in the midst of a strict lockdown, the first-time renovators embarked on a kitchen remodel, which Becca designed mostly online all by herself (language barrier notwithstanding).

Materials That Stand the Test of Time

Becca had been saving inspiration images for her dream kitchen for years, so choosing materials was easy. She wanted ones that could have been used both a hundred years ago or a hundred years from now. She turned to the Brits for antiqued brass hardware and oak cabinets, landing on Neptune Kitchens after getting a few different quotes. “I liked that they had an unpainted finish, which the other companies didn’t offer, and that they were ready-made, so the lead time was much quicker than if we had gone the custom route,” she explains.

With thick stone walls that limited their floor plan options, Becca worked with the cabinetmaker to keep most of the appliances in the same place, only moving the sink and dishwasher a few feet along the same wall and removing a washer-dryer to make room for a hutch that sits atop the cabinet on one end. (The laundry was relocated to the basement, along with a propane tank that feeds the gas stove, which was previously tucked away in one of the cupboards.)

A Splurge That Took a Little Convincing

Becca stood her ground when the designer kept adding upper cabinets to the sketch—she had other plans for the blank wall. Specifically, a Calacatta Viola marble countertop and backsplash with a matching shelf. “I had seen a picture of a kitchen with that stone on the baseboards and the door frame,” she remembers “I fell in love. It was the most beautiful thing I had ever seen. The cabinet company tried to talk me out of the ledge, saying it wasn’t really practical. And I was like, well, that’s not really the point. I don’t plan to store things on it; I just want it to be beautiful.” It was her biggest splurge. To balance out the expense, Becca covered the rest of the walls in a warm gray-white limewash, which she applied herself.

The pandemic miraculously only interfered once, when Becca went to order her dream tiles for the floors, which were inspired by the lobby of El Fenn in Marrakech. “I have a friend in Morocco whose uncle owns a zellige company, and I had fully planned on using their tiles,” she explains. But they couldn’t export them due to the lockdown. She had to find a company in Europe instead, one that could ship the warm white and unfinished terracotta glazed tiles to create the diamond pattern she had in mind. Luckily Mosaic Factory came to the rescue.

The issues didn’t stop there. Zellige tiles are common where Becca and Michael had lived in Morocco, but their contractor, who had never applied them before, was nervous about how uneven they would look. “I told him: Good, don’t fight it. Don’t try to make them too perfect,” she says.

A Contractor Who Went the Extra Mile

The contractor pulled through in more ways than one. When it came time to design the vent hood, “he took me outside and gave me a piece of drywall and said: ‘Draw the shape,’” Becca remembers after she asked for a curved silhouette. He grabbed his saw and got to work. The contractor also built rounded corners to adhere to the 15-inch-thick kitchen doorframe to create an arch that nods to the undulating hood. “We weren’t going to cut into the stone wall, but he knew exactly how to add to the opening to get the look I wanted,” she notes.

After resisting ordering anything American, Becca turned to the U.S. just once, to source her Waterworks faucet. “I was like, okay, Becca, don’t be extra,” she says, laughing. “Don’t be that American expat.” But the European options she found were either chrome with a brass finish or lacquered, and she loved that this one was short enough to fit under the shelf above but substantial enough that it didn’t get lost in the busy marble. All she had to do was have it retrofitted for French plumbing. Just like her kitchen, it just needed a little tweaking.