Her space is an ode to contrast. 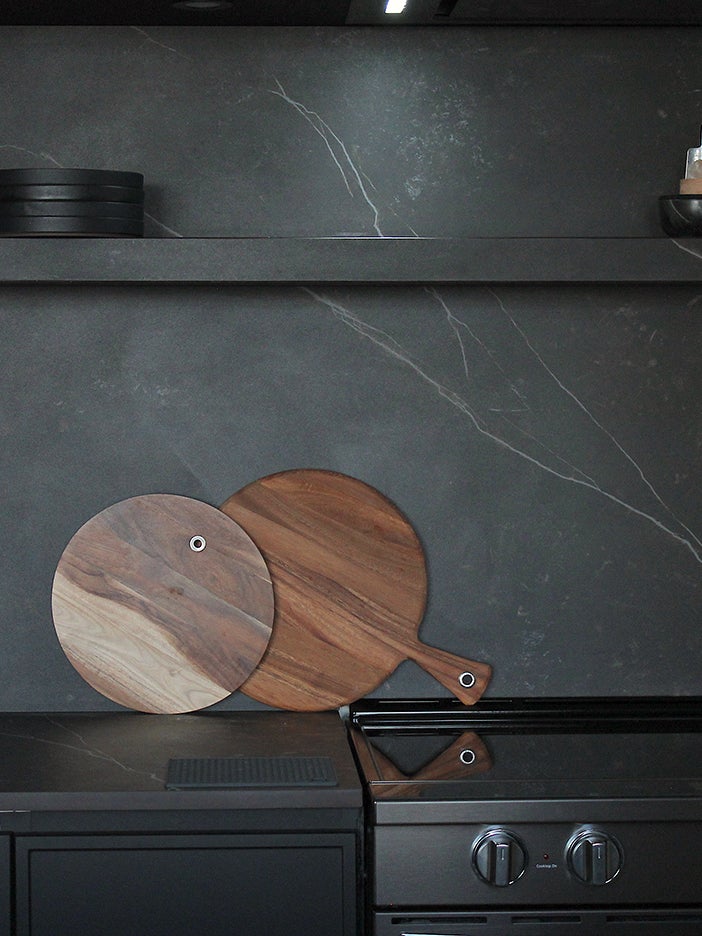 Nike Onile’s Toronto kitchen is an ode to contrast. “I have a deeply emotional connection to yin and yang,” says the designer behind Studio Ode. Oddly enough, her space always had a black and white theme going, but for the first 12 or so years she owned the apartment, it was in the form of pink-tone laminate countertops, embellished black cabinet doors, and an ’80s-white oven. Today a sleek peninsula beams against a backdrop of ceiling-height cupboards.

Onile’s decision to finally renovate the galley-like space was driven by a combination of the pandemic (she had rented the place out for years but decided to move back in during lockdown because the natural light was significantly better than that in the loft she was staying in) and looking out for her personal well-being. “I was going through some things years ago, and at the end of it, I emerged having a really deep respect for my own darkness,” recalls Onile. “It allowed me to shine even brighter. The kitchen is kind of a story I’m telling; I’m reminding myself of that.”

While she couldn’t change the layout, removing the partial wall instantly opened up the space and made way for an extra-long peninsula. “Surprisingly, even though the kitchen faces floor-to-ceiling windows, it was super-dark in that corner,” she says. The challenge then became making up for lost storage elsewhere, but luckily she had a few bright ideas up her sleeve.

Take the Uppers as Far as They’ll Go

Removing the bulkhead above the refrigerator allowed Onile to extend the upper cabinets all the way to the ceiling. While all those doors would need to be new (she opted for ones from Home Depot in a matte color called Black Onyx), she simply refaced the lower cabinets so they matched. “Hanging on to those boxes that were in good condition was a huge save,” she says. “And it keeps them out of the landfill.”

In an effort to make up for some of the storage she lost in the process of opening up the kitchen to the living room, she added lower cabinets within the peninsula (that’s where the microwave now lives). “There are no handles anywhere in my house, except for the ones to get into rooms,” she says, explaining her decision to go with push-to-open doors. “I like things to look seamless.”

A custom touch that paid off? Onile made use of some floating shelves she’s been carrying around with her from house to house by asking her contractor to make the wall perpendicular to the peninsula the exact length of the planks. “It was only an additional 1 1/2 inches, and now they look like they fit perfectly,” she notes.

Picture How You Want to Use Your Counters in 10 Years

Onile’s splurge: The ultra-durable Dekton countertops and backsplash. While the solid surface is man-made, it’s comparable in price to marble. “It’s one of those materials that you can do anything to—cut directly on it; light it on fire; it’s high, high resistance,” says the designer. With plans to turn the space back into a rental one day, she knew whatever countertop she brought in would have to withstand wear and tear from others. “Oftentimes people do renovations and they don’t think about the way they want to use the space in the future or who they envision themselves to be,” says Onile, who takes a holistic, wellness-focused approach to all of her client projects, too. “It needs to feel incredible and safe and aligned for you.”

Find Your Light, Whatever It Takes

For the longest time Onile’s only lighting had been the central flush mount (now replaced with Kelly Wearstler’s chic Nodes fixture). There was no electrical running above the peninsula, but that didn’t deter her from making it work. Because she’s not a big fan of swagging pendants, she had her contractor build out a bulkhead, then wrapped the structure in oak boards so it looked like an architectural detail. “It feels intentional,” she says. From there they were able to hang a linear fixture that illuminates the whole space. She even went so far as to incorporate recessed bulbs under the upper cabinets and the integrated hood, so she can really see what she’s cooking now.