Where we splurged and where we saved. 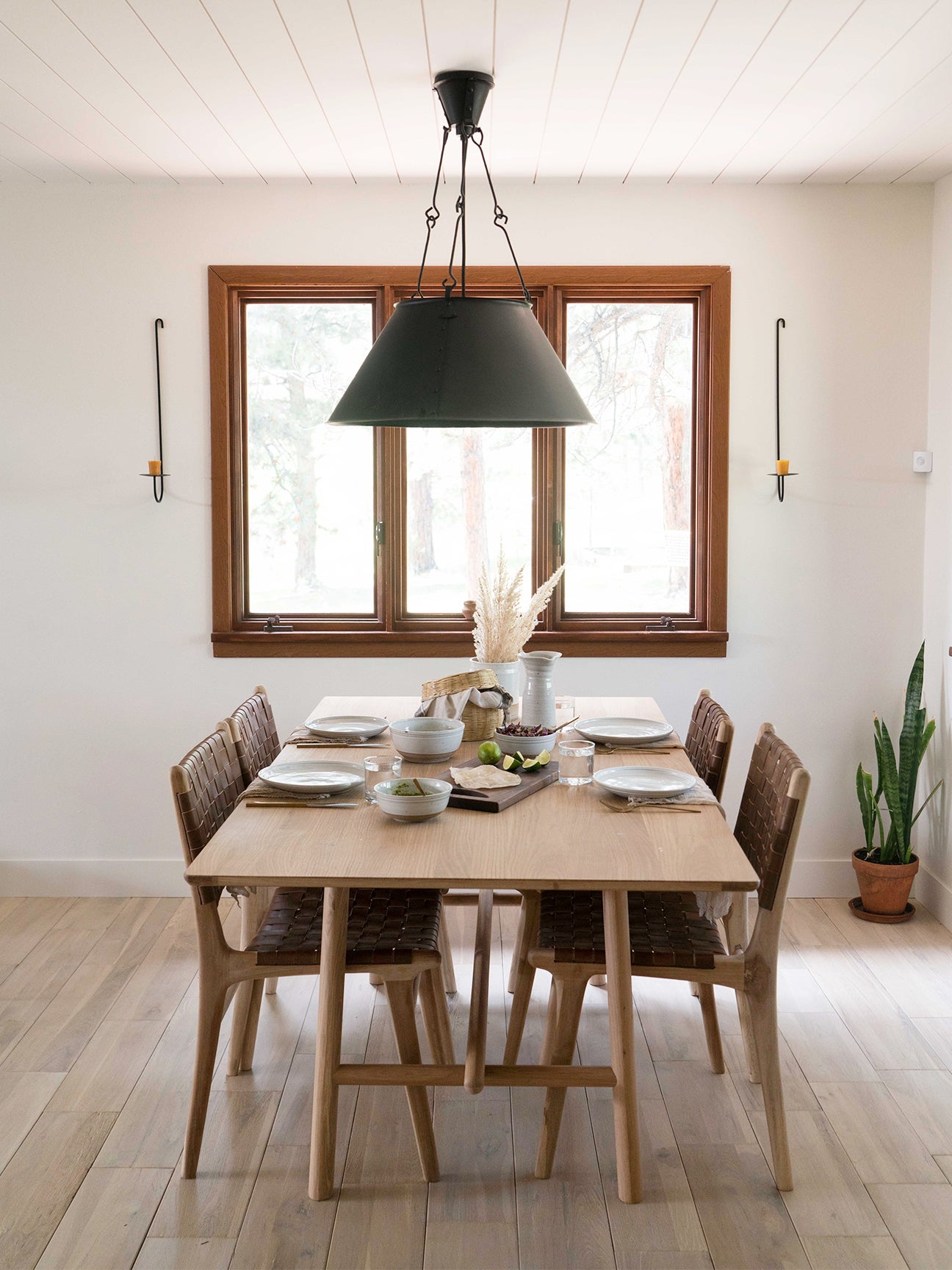 Sarah Lawrence was understandably skeptical when her contractor told her that he would have her Colorado cabin fixed up in just four weeks. “I struggled to believe it, but sure enough, he got it done with time to spare,” recalls Lawrence, who, together with her husband, Hunter, runs the photography studio The Lawrence House. Many of us struggle to finish our book club’s pick in one month, but the couple, along with their contractor and a few friends, pulled off an entire remodel in just 30 days.

“We helped demo for the first week before the contractor started, and he was super-helpful in letting us know small things that we could pitch in on to help keep costs down,” says Lawrence. Those tasks included ripping out the old flooring, installing new light fixtures, painting the baseboards and trim, and taking down the upper kitchen cabinets. But the couple didn’t just skirt costs by picking up a hammer. They also put a lot of thought into the finishes they wanted to splurge (and save) on. Their all-in budget for labor and most of the materials? $34,000. Here, Lawrence walks us through some of the best decisions they made along the way.

Save: The Farmhouse Sink

Lawrence had been eyeing a Shaws Original sink from Rohl that cost $1,500 but decided to buy a similar-looking option from Home Depot to balance things out. Her savings? $1,000. “We’ve had it for a few months now and it’s wearing really nicely!” she says.

Because the new farmhouse sink was bigger than the metal one that was previously there, Lawrence had no choice but to tear out the cabinets underneath. But instead of having new doors made, she got creative with covering the empty space. “I bought a linen curtain from Target, and a friend helped me sew it to be the right length,” she shares. “It feels more European to me, which I love.” Replacing the upper cabinets with floating shelves really opened up the room—and saved them from shelling out on more millwork.

“We also didn’t put in a backsplash or enclose the hood, which helped us save some money,” she continues. “I would love to add a few of those things in the future, but for now I am really happy with the choices we made.”

The number-one item on her wish list? DeVol Kitchens’s aged brass Ionian faucets.“Once I saw that it was possible and shipping wasn’t that crazy, I knew we had to have some of these lovely pieces in our home,” she says.  The antique-looking spouts retail for $750 each, and the couple purchased two of them. “I’m convinced if we ever move to another house, I will be taking these faucets with me!” says Lawrence.

“If we ever move to another house, I will be taking these faucets with me!”

For the master and guest bedrooms, Lawrence partnered with Portola Paints, using its Roman Clay on the walls for a natural, weathered finish. “I also wanted to make sure I was still using a high-quality paint in the other rooms, so we splurged a little by going with Benjamin Moore,” she says. In the living room and kitchen, they used the brand’s White Dove in a matte finish, and swathed the doors and trim in Gargoyle, a moody brownish gray. “We didn’t want any shine, and this matte paint doesn’t scuff when used on the baseboards,” she adds.

Out with the dingy office ceiling tiles, in with the wood—faux wood, that is. While the couple originally planned to cover their ceiling in real planks, when they learned that shiplap MDF (medium-density fiberboard) runs at just 60 cents per linear foot, they switched gears. “It ended up costing 60 percent less and still gave us the look we were going for,” says Lawrence. In the end, the new tongue-and-groove ceiling only cost them $500 total, whereas real planks would have landed them in the $1,300 range.

advertisement
“It ended up costing 60 percent less and still gave us the look we were going for.”

Save: The Bathroom Vanity

In the formerly pumpkin-orange bathroom, the couple opted for a unique alternative to a traditional vanity: a piece of furniture. “We had originally envisioned two pieces of floating wood for our bathroom, but it was going to cost us around $1,800 for the labor and materials,” Lawrence recalls. So she started driving around Denver, hunting for the perfect piece, and stumbled across this $800 table at an antiques store. Their contractor added a $380 sink from All Modern and…voilà!

Because the couple didn’t make any drastic changes to the kitchen’s footprint (by keeping the existing walls, they saved $3,000 in electrical expenses), they leaned into smaller upgrades. Enter DeVol’s aged brass handles. The drawer pulls retail for $75 each, but Lawrence attests she hasn’t “regretted spending the money for one second.” In the rest of the house, the photographer installed oil-rubbed bronze door handles (the ones she bought cost $107 at Home Depot).

Up next? Getting back outdoors. “We plan to add in landscaping over time and hope to have a greenhouse and sauna within the next year or so,” Lawrence shares. The magic really is in the details.

This story was originally published on August 24, 2019. It has been updated.