With most of the knotty pine wall paneling still intact. 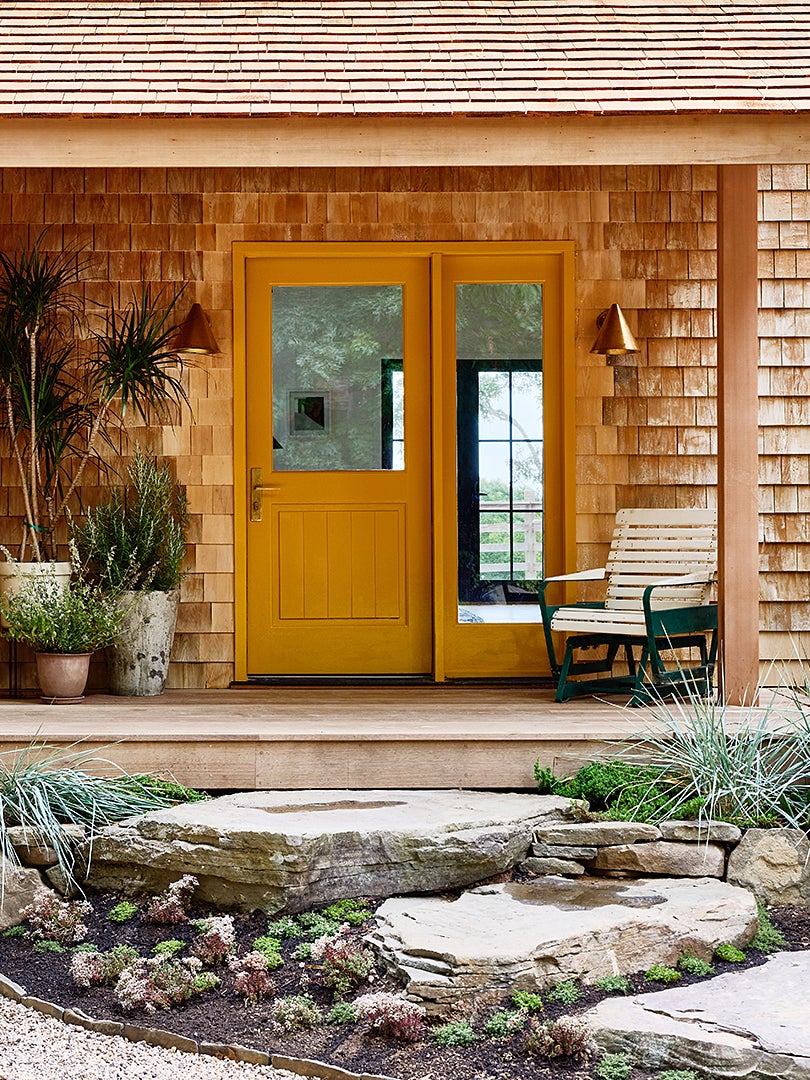 Where most home buyers would have seen a sea of knotty pine paneling, Robert McKinley saw opportunity. “I hate a fully Sheetrock house,” says the interior designer and founder of Studio Robert McKinley, a firm specializing in hospitality venues. The textured orange-toned boards were what sold him on his latest  Airbnb bungalow project, dubbed Edison, in Montauk, New York, where he and his wife, Kate Nauta, own other fully shoppable vacation rentals. “We’re always looking for unseen potential,” he explains.

All it took was some paint and refinishing to make the rustic interior feel fresh again. In between coats of white, sage green, and National Geographic yellow, McKinley rearranged the home’s layout, transforming an upstairs art studio into the main bedroom (it’s got ocean views), opening up the kitchen, and adding a yoga space. And he turned a former doorway into a large steel-paned window in the living room and installed skylights where possible, filling the house with much-needed natural light. Ahead, the seasoned renovator shares five standout ideas from his latest project.

“I think some people are a little too trigger-happy to tear everything out,” McKinley says of his decision to not demolish the existing fireplace. Instead the designer cleaned up the facade, coating the old masonry in a smooth plaster finish. “And then we did a limewash on top of that,” he adds.

Not up for a DIY? Never fear: Kickstart your project with HomeAdvisor’s directory of paint pros in your area.

Because the house is surrounded by mature trees, McKinley describes being inside it as “feeling like you’re up in a canopy.” Translating all that greenery indoors was a natural starting point for the palette, but not just any shade was up to the task: The designer opted for a muted mossy hue in the form of kitchen floor tiles and checkered tub-shower walls. In the media room, he went with an old-world limewash treatment that emphasized the texture of the pine paneling’s grain.

“In all our bungalows, I always make the TV space dark and very moody,” he says. The bar nook was preexisting, but painting it a poppy shade of red and adding pendant lights turned it into a destination.

McKinley committed to the original wood in one of the guest bedrooms. The space’s sloped ceilings and soffits sparked visions of New England fishing cabins and artist retreats, like those that once belonged to Peter Beard and Andy Warhol. “It’s collected and traveler–meets–salty old man by the sea,” says the designer of the cozy nook. Rocking in the interior hammock feels a little bit like being on the ocean.

The dark, barklike Heath backsplash and Cabernet brown marble countertops in the kitchen are subtle nods to Montauk’s wetlands. “You see these compressed clay and sand areas with these colors running through it,” says McKinley. Because recessed lighting “drives him nuts,” the designer went in the exact opposite direction with protruding bulb fixtures.

McKinley leaned into the fact that this home is the largest of his bungalow renovations (it’s 4,200 square feet) by focusing on oversize accents, like an extra-large woven pendant shade over the dining table. “That’s not a high ceiling, so it makes that space very cozy,” he points out. In the vaulted living room, however, he didn’t go down but rather up with a towering wicker basket filled with flowers.