Splendor in the green. 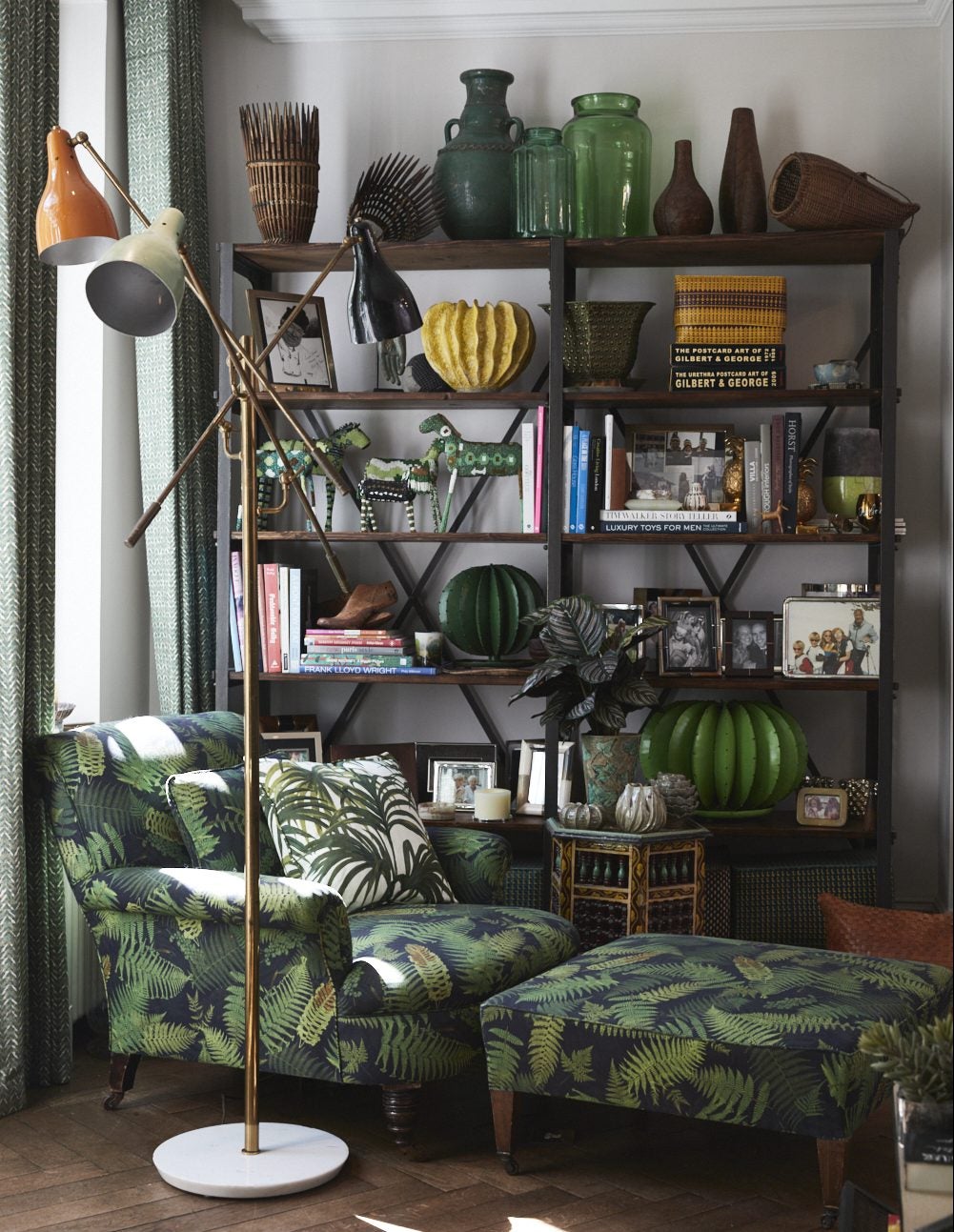 When London-based fashion creative Deborah Brett first saw her two-story, 1930s-era home-to-be, it wasn’t exactly love at first sight. “It seemed very grown-up,” she recalls. At the time, Brett and her husband, filmmaker Tom Edmunds, had just married, and buying such an expansive family property felt a little too soon—like they were speeding “two or three leaps ahead.”

Still, there was something charming about the red-brick structure, with its sweeping front steps, big bay windows, and backyard that edged onto the bucolic woodland of Holland Park. The previous owners had lived there for 30 years and raised five children. “You could feel the love as soon as you walked in,” says Brett. She asked her father—who had been less than enthusiastic about the other potential candidates—for a second opinion. He took one look and was shockingly adamant: This house was a keeper.

Loved as it was, the building required “a lot of work,” says Brett—practical stuff, such as a new roof, new windows, and a new boiler, plus plenty of cosmetic changes. The newlyweds restored the original Art Deco details, installing vintage chandeliers, a hand-painted de Gournay panel in the entryway, and oak parquet floors in a large-scale herringbone pattern inspired by apartments they’d seen in Paris. The French theme followed suit with a color palette of eau de nil green, lilac, and Christian Dior gray. “Very elegant and a lot of glass,” Brett notes of the overall effect. 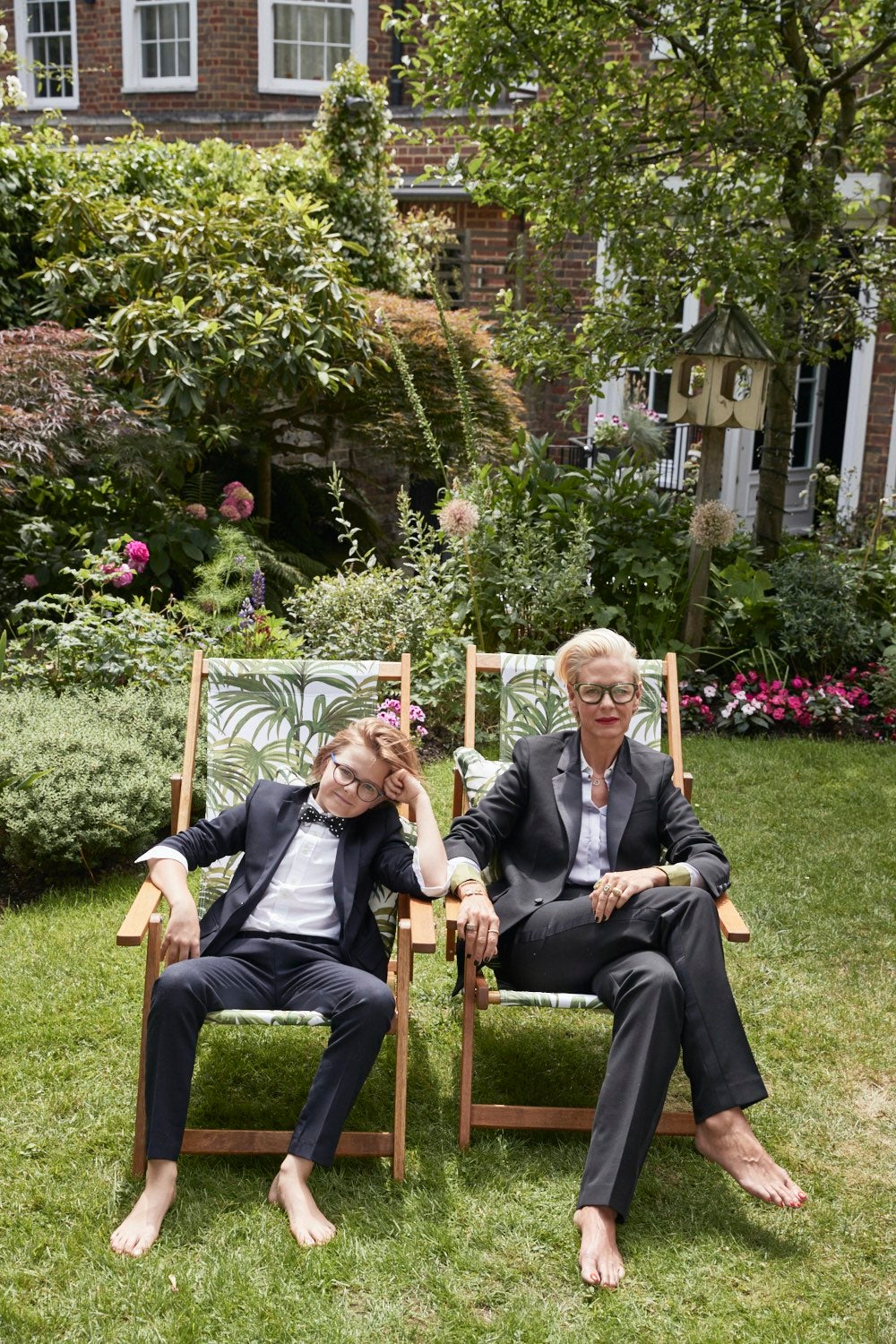 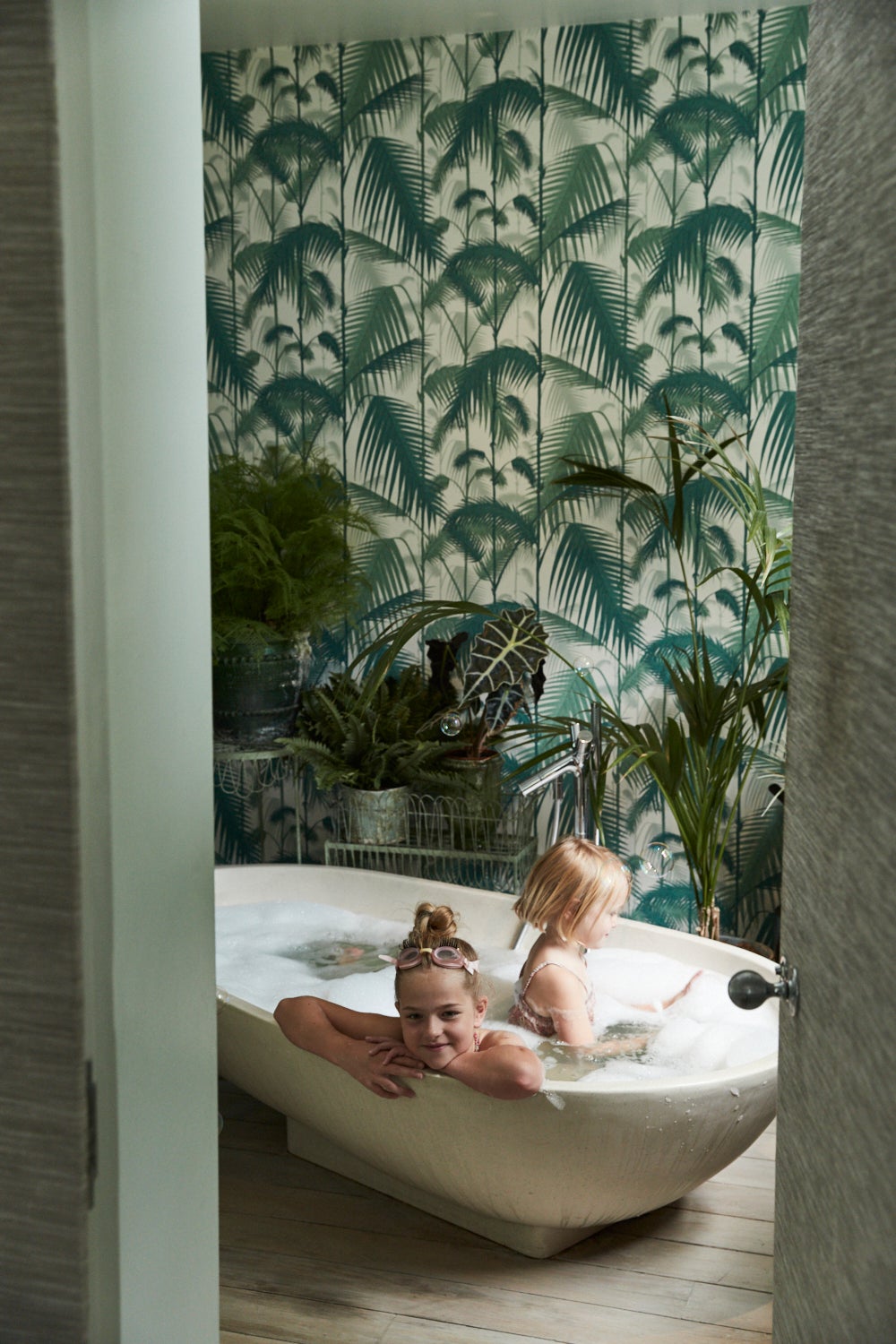 Life hummed along and they welcomed a child, then a second. The growing family—which by then also included a live-in nanny—suddenly found themselves crammed into the smallest spaces that hadn’t been updated: a cozy kitchen and nook-like living room. The sweeping back parlor once used for entertaining sat neglected, a relic of life before toddlers, diapers, and toys. When Brett discovered a third baby was on the way, she knew the house needed an overhaul—and quick.

Time was of the essence, but the couple approached the next round of renovations with the same creative problem-solving usually reserved for their work on fashion shoots and film sets, deliberating over each possible configuration and remeasuring at every turn. They completely opened up the first-floor layout to highlight the gorgeous back garden. However, Brett was adamant that the exterior of the building—and her prized bay windows—not be altered. So they tapped their original contractor, who “already knew the house back to front,” to expand downward, creating a new double basement for a laundry room, garage, and more.

With the structural aspects settled, they turned their attention to refreshing the decor. “I was really nervous about getting a designer in who would force me to lose the things I loved,” Brett confides. But after seeing the work of Hubert Zandberg at a friend’s place—and how thoughtfully he’d incorporated her beloved old pieces—Brett knew she’d found the ideal collaborator. Zandberg was as enthused as she was about keeping the Deco chandeliers she’d sourced, and, together, they reupholstered the interior of an antique Swedish armoire (a wedding gift from Brett’s aunt and uncle) to use as a wardrobe in one of her daughter’s bedrooms. Preserving the de Gournay panel in the entrance hall was also a must; they boarded it up with a protective covering and crossed their fingers while the basement was dug. Several months later, they found that not only had it survived but it looked better than ever, thanks to the shade of petrol green-blue Zandberg had recommended for the surrounding walls. “It brought out the colors in a totally different way—almost like we had a new painting on the wall,” says Brett.

The verdant colorway proved a revelatory connection point for the rest of the home. Brett, an avid ceramist who studied textile design at Central Saint Martins, had long been a fan of foliage motifs, so to “bring the garden inside,” she stuck to a palette of leafy patterns and various dark green and gray hues throughout—a concept she admits could have been risky in a city known for such gloomy weather. “I have never been afraid of dark spaces,” Brett admits, laughing. “There’s something cocooning and enveloping about them.” 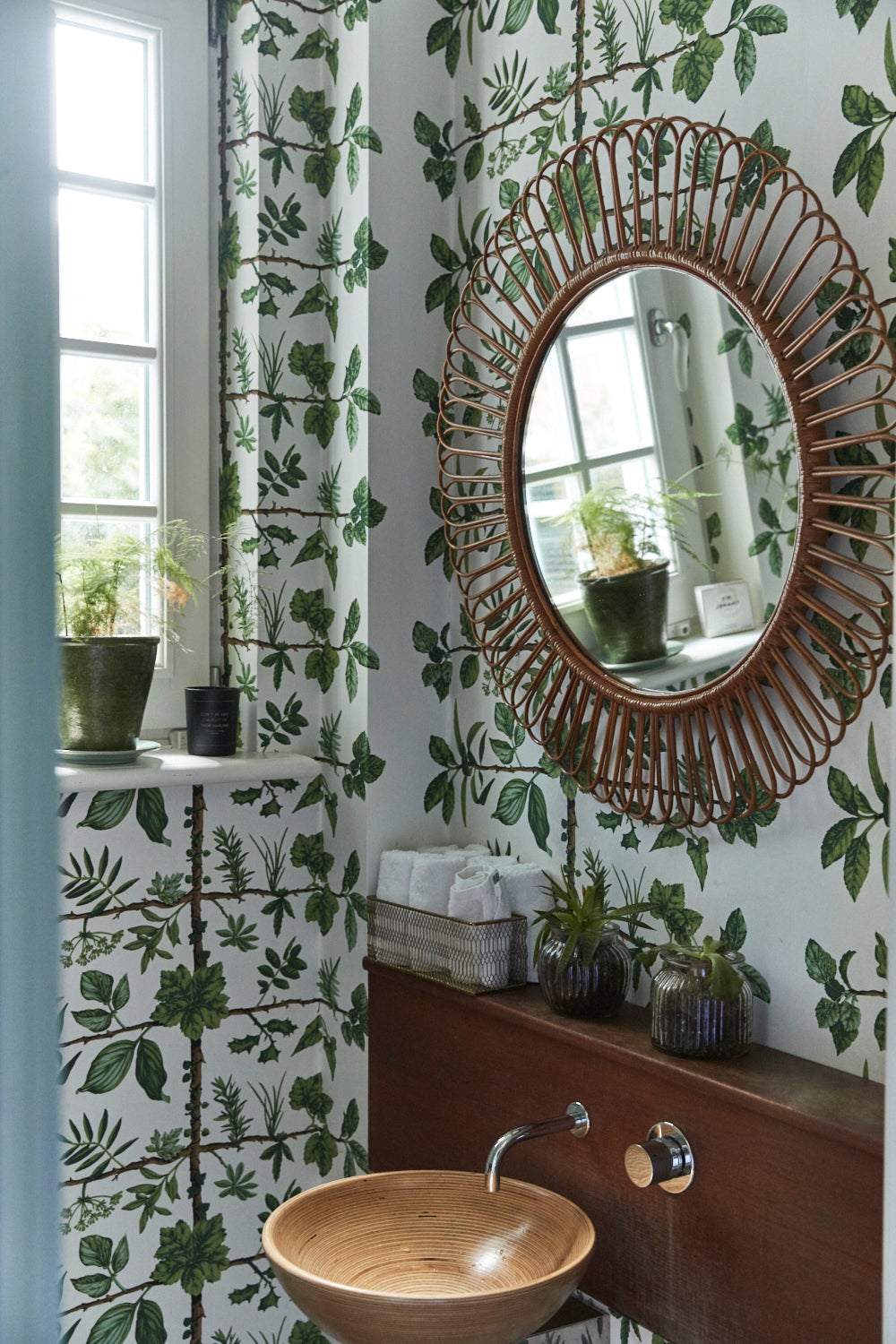 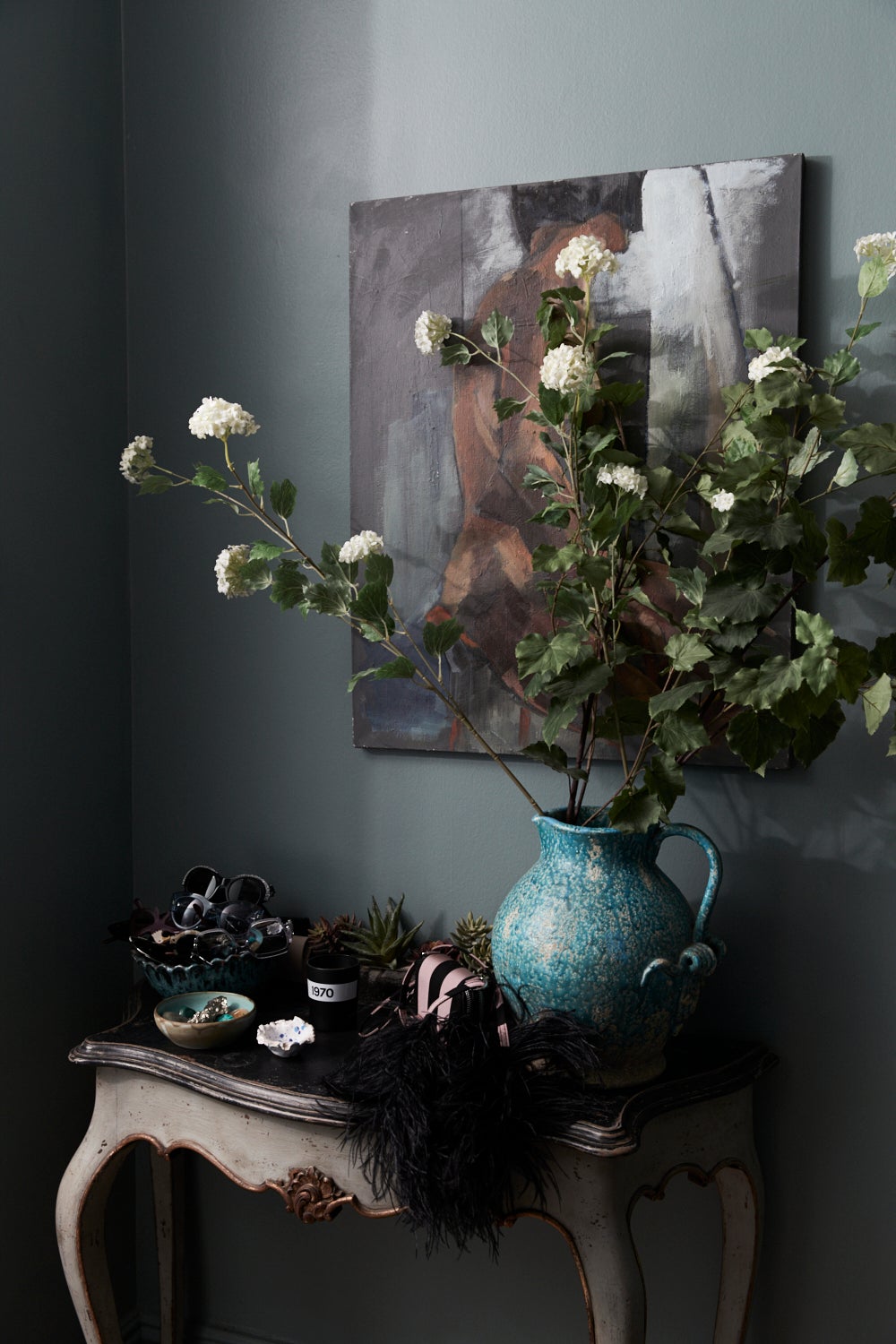 Adding to that effect was her penchant for combining fabrics in different textures—a talent honed during her long fashion career and reflected in her “tone-on-tone” dressing style. In the living room, two shades of velvet were used for the custom-made sofa. A fern motif created by her close friends at fashion label Clements Ribeiro appears in the room’s reading corner. “I loved it so much I made them print an extra nine yards to cover my chair in,” Brett explains. In the kitchen, she leaned into the all-green palette, choosing dark emerald tiles for the backsplash and extending them all the way up and over the shelves above the sink. The design was executed by Hubert Zandberg Interiors.

“When you’re making these decisions they can [feel] quite big and scary,” says Brett of the home’s green-centric curation. “But there’s a way to create the right balance—and that’s definitely through color.”See more color-centric stories: This Bold Blue Kitchen Taught Us a Reno Shortcut: Invert the Color PaletteEvery Room in This São Paulo Home Is a Different ColorTwo Hues Is Better Than One: The Case for Color-Blocking Your Walls