The nearby fireplace got a terrazzo update, too. 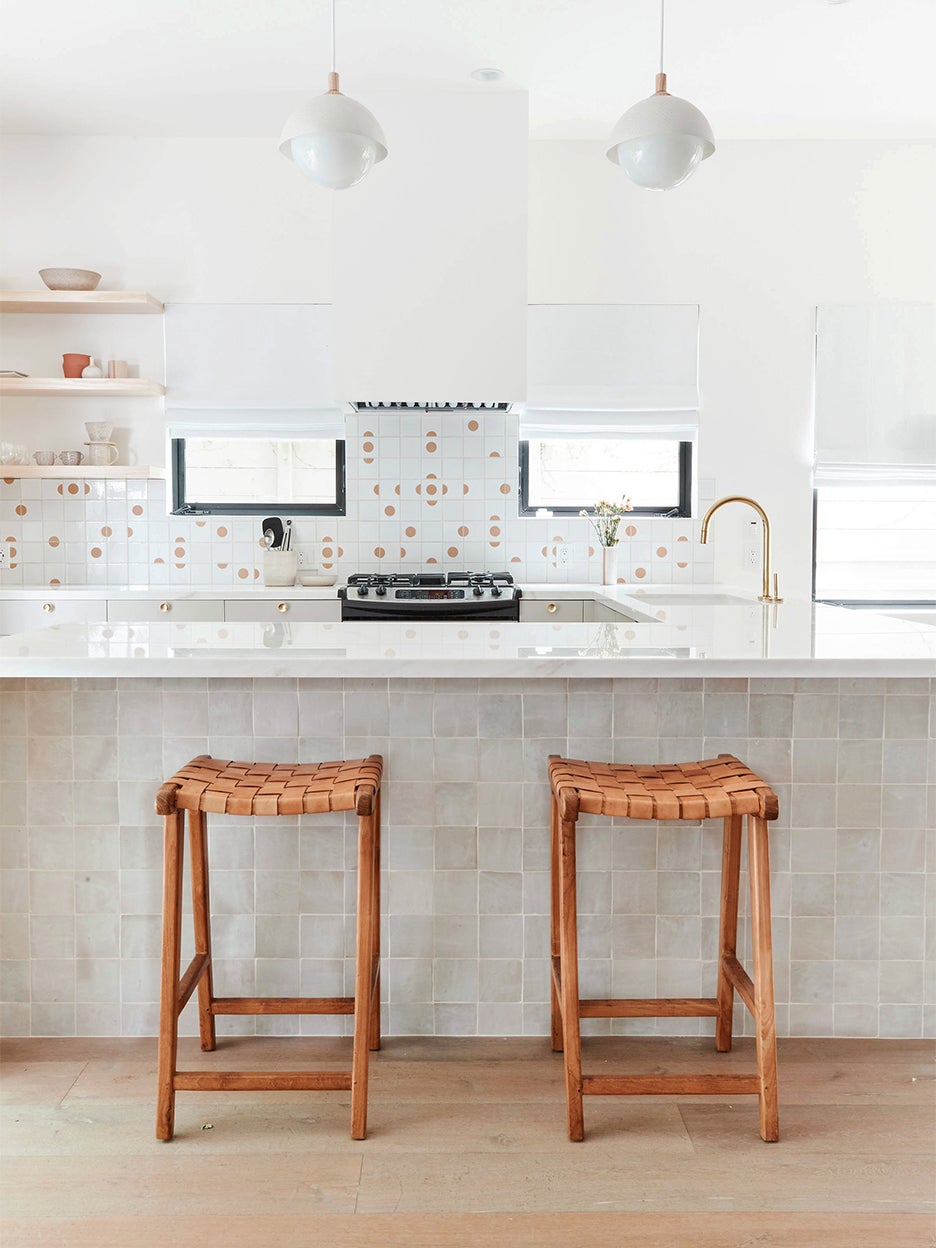 When designer Natalie Myers first saw this Venice Beach, California, kitchen, she couldn’t pinpoint one thing that was particularly wrong with the space. “It was totally not terrible,” she says. The room had an open floor plan going for it, and the maple-wood cabinets and most of the appliances that were installed back in 2000 were in tiptop shape. Even so, it wasn’t meeting her client’s vision of a getaway retreat—the group of siblings from New York bought the place to share as a vacation home.

Step one? Modernizing the cabinets. Myers sent the faces off to the paint shop to be sprayed, then removed most of the uppers and replaced them with white oak open shelves. “We were able to save a lot of money by sticking with the existing cupboards,” she says. Step two: Eliminate the two wine coolers and install a proofing drawer in the empty cavity (one of the owners is an avid baker). For that quintessential SoCal style, the designer turned to tile—and lots of it.

Turn Blank Space Into Something Textural

While Myers could have painted the underside of the L-shaped peninsula white and called it a day, she decided to scrap the maple-wood surface and go over it with the champion of textured surfaces: zellige tile. “I have a love affair with tile,” says the designer. “I like to use tile in the way an artist would approach a canvas.” She also extended the new Calacatta Calvani marble countertop (the splurge of the space) into a waterfall edge and extended the lip a few inches to make room for barstool seating.

Map Out the Backsplash

The seemingly random Temparto Tile backsplash pattern (something Myers had saved to a mood board forever ago and had been dying to try) was actually carefully mapped out; the designer planned where every tile would go in CAD. That way, she knew exactly how many blank pieces and abstract shapes she would need, down to the radiating flower-like design over the stove. “It might not be the most appropriate option for a serious kitchen, but for a vacation house it’s really fun,” she says.

Myers got rid of the old stainless steel wall-mount hood and added architectural detail by simply enclosing a hood insert in a drywall surround. “It just gets it to the next level,” says the designer. After buying the insert, the builder framed out the opening with 2-by-4s, covered it up, and painted it white (Benjamin Moore’s Revere Pewter) like the rest of the walls. Depending on your budget, Myers notes you can get more creative with stone or plaster.

Install a Variety of Lighting

To draw guests over to the counter, the designer suspended large perforated dome pendants from Allied Maker over the peninsula. “It distinguishes the space as a zone to hang out in and pull up a chair,” she says. The fixtures’ shape underscores the geometry of the backsplash, but more important, no one has to rely on the recessed ceiling lights.

Myers brought in white roman shades to warm up the sleek black-framed windows—they were too harsh without the treatments. “In every kitchen, it’s nice to have a softer window covering—not just for privacy but natural texture, too,” she says. Because the sills sit further back, away from the grease-prone stovetop, she was able to go with a soft linen fabric.

The nearby fireplace is 100 percent Myers’s design. The speckled tiles are from her personal collaboration with Concrete Collaborative, inspired by her own need for terrazzo tiles (there aren’t a lot out there). “People either do cement tile that looks like the real thing or a solid slab, but there’s not a lot in between,” she says. The designer followed her intuition and kept the tiles to a square; it would look too busy if she took it all the way up the wall. Using a leftover marble cutoff from the countertop, Myers built out a small, 1-foot-high bench around the hearth. Every element of the space is living its best (in some cases, second) life.