The living room will take your breath away. 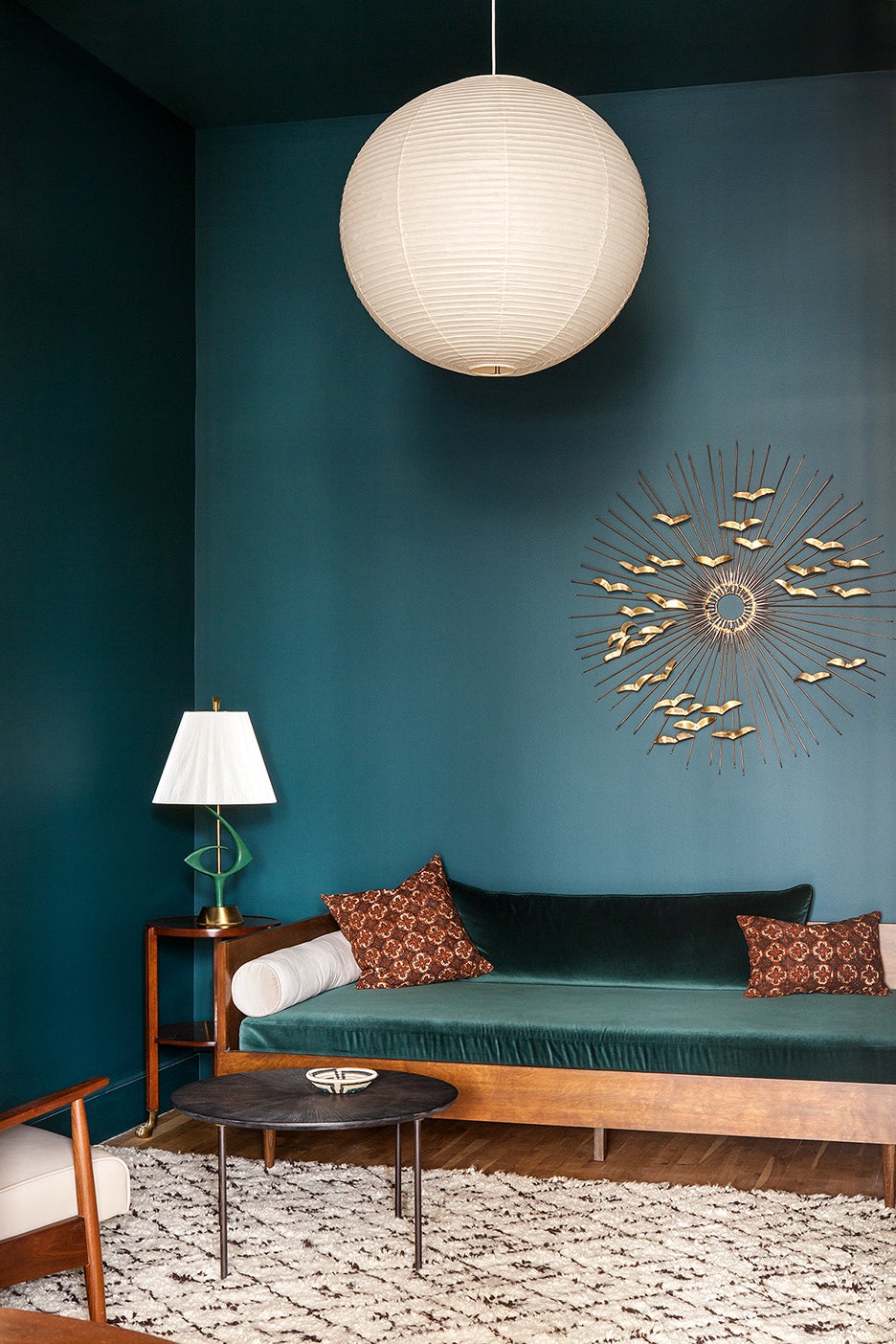 No sofa is too bold, no paint color off limits, no fixture too risky when your “forever home” is at stake. After five years of living in her bright Brooklyn Heights apartment, Camille Kubie decided it was time for a change—but that doesn’t necessarily mean she was ready to move. That’s when Shanti Crawford, the principal and creative behind Indigo & Ochre Design, entered the picture. Wanting to create a space that not only mirrored her style but felt distinctly permanent, they began by combining Kubie’s existing space with the apartment next door.

“I loved my apartment but I knew that with a little bit more space, it could be my forever home. I agonized about whether we’d find a layout that would make sense, but once we did, I knew it would be the right thing to move forward,” Kubie tells Domino.

Armed with the knowledge that her client had forever been charmed by the building’s high ceilings, enormous industrial windows, and proximity to the water, Crawford wanted to channel everything Kubie loved about living in New York City into the redesign. Sophisticated, feminine, and a touch zen, the 2,000-square-foot spread boasts all the makings of a curated contemporary oasis. “What was most important to me was that every room functioned properly, and that the apartment had a sense of character,” says Kubie. “I didn’t want everything to be brand new—it’s one of the reasons I wanted to work with Shanti.” With an unparalleled eye for vintage rugs and fearless approach to furniture, the Brooklyn-based designer set out to capture the new space with soul.

After the right walls had been knocked down to seamlessly blend the two adjacent apartments, Crawford’s next challenge was devising a new layout for the home.

“We wanted to focus on the flow of the space and bring natural light in wherever we could while embracing the dark coziness of spaces without it,” explains Crawford. “We thought a lot about the function(s) we wanted of each space and designed to facilitate those.”

Expanding the living room, carving out a separate den off the formal dining room, creating a new master suite with a walk-in closet, and converting the old master bedroom into a home office were just a few major modifications on their to-do list. As for the kitchen, the extensive overhaul entailed adding a walk-in pantry, recladding the countertops and backsplash in carrara marble, and resurfacing the existing cabinets. The result? A seriously serene cooking space that feeds off the apartment’s access to natural sunlight.

While Crawford made a point to incorporate as many pieces that her client already owned as possible—including her mod kitchen stools, vintage dining table, bed, and art—most of the furniture was purchased with the redesigned space in mind.

“I almost always encourage clients to splurge on elements that will likely be in their homes for decades and will really ground the design of the room,” explains Crawford. “I’d rather have the lion’s share of a budget go to a beautiful vintage or antique rug and pare back on the other pieces that are likely to get swapped out over time than the reverse. That’s almost always the first item I have a client buy so that we can budget accordingly for the rest.” 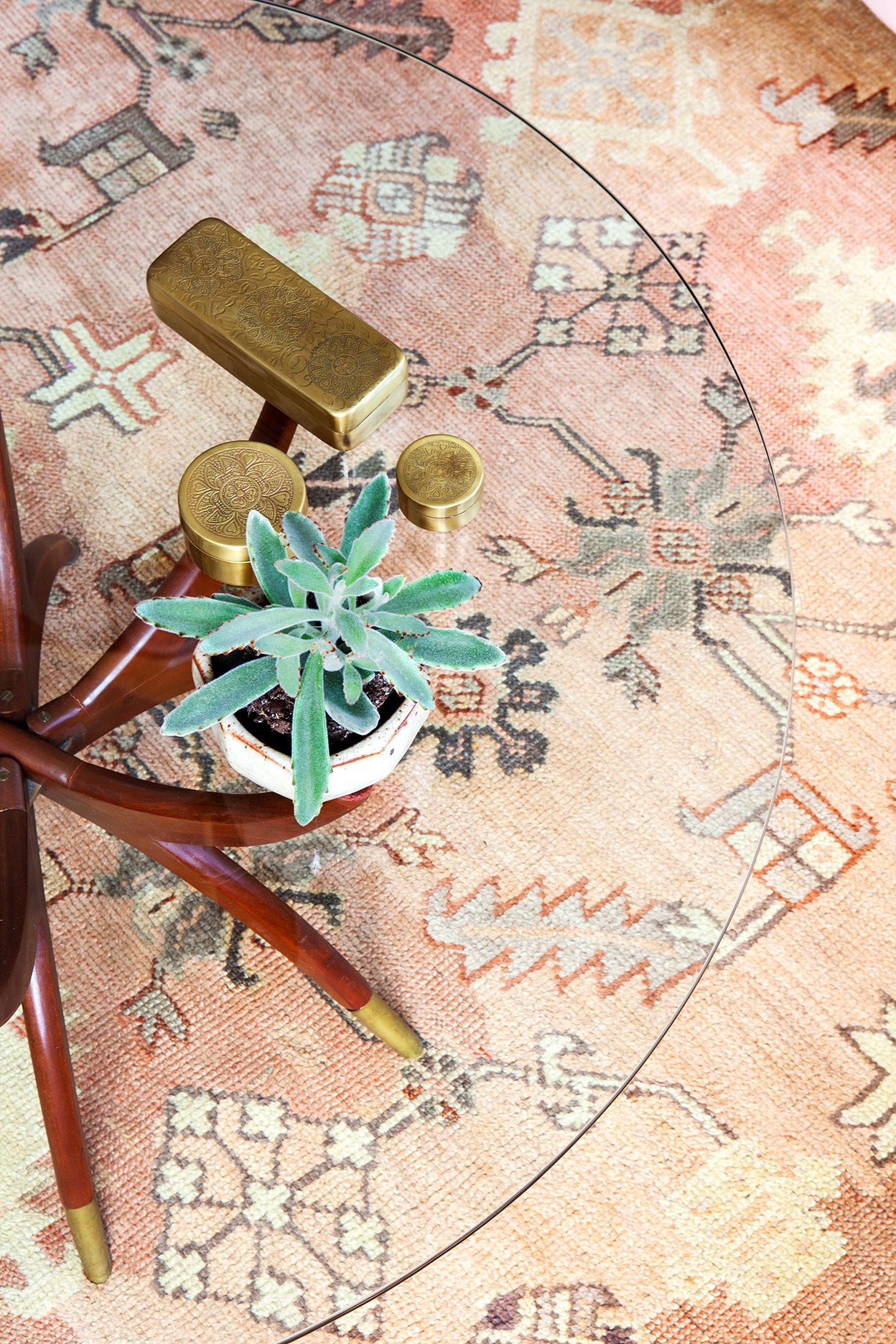 Rugs? Consider that one of her specialties. “I almost always start designing spaces from vintage or antique rugs—they anchor a room and bring so much character and points of reference for the rest of the design,” says the designer.

While pink had originally been taken off the table, Kubie immediately connected with the rose-toned oushak that now brings a colorful energy to the shapely furnishings that fill the room.

“I always try to balance shapes and create tensions between the rectilinear and the curvilinear,” says Crawford. “There is a lot of the former in this flat with strong architectural details like the windows and soffits and lots of rectangular rooms.” Blush pink bolsters, curvaceous seating, and structural side tables help balance the apartment’s inherent industrial character.

“I’d be lying if I didn’t mention that I spend most of my free time on the white sofa in the living room. I love how sculptural it is, but more importantly, it is so comfortable!” says Kubie “It’s like sitting on a giant cloud. Since we placed it at an angle, it is also a great vantage point to take in so many of the other beautiful elements in the living room, kitchen and dining room. For better or worse, my dog Evie loves it too.”

While a bold gallery wall can instantly elevate a room, art can get quickly expensive if you’re not careful. So what do you do when you want to dress up your bare walls without spending a fortune? Wallpaper, wallpaper, wallpaper. Though not the most inexpensive fix, a dramatic wall covering can often prove to be a more budget-friendly alternative, and even lend a more memorable first impression. Inspired by the soft blending of city lights, an exquisite print by Brooklyn-based designer Jill Malek sets a dreamy tone for the refined dining room, while also picking up on the blues, greys, and whites that inform the rest of the home’s palette.

In a same celestial-like manner, a fantastical fixture made from vintage globes Crawford procured on a flea market trip upstate, imparts the room with a bold sense of grace and ease. Her advice for selecting

“The fixture should be one that is attractive both sculpturally at eye level and casts a flattering light when you’re sitting under it,” Crawford suggests. “It’s always important that the light itself is not harsh and always on a dimmer.”

An idyllic spot to retreat for an afternoon nap or relish a post-dinner drink, a quiet parlor abound in deep jewel tones sits just beyond the dining room. While Kubie initially felt worried that the rich colors would overpower the small sitting room, she quickly came to embrace the space’s darker ways.

“I love how light it is in this apartment, but it’s really nice to have a place to escape from it,” says Kubie. “It’s a small room with no windows and I was nervous that the dark color would make it feel smaller, but it turns out that it was the right idea to play to its strengths.”

Moody and multi-functional by design, the serene spot comes as a reminder that every homeowner deserves a quiet, at-home retreat to call their own. “While I was at her housewarming, my client’s best friend from childhood proclaimed it ‘perfect for makeout sessions and crosswords’…I think that range is pretty awesome!” says Crawford.

In the master suite, earthy textiles and bursts of pattern offset the room’s saturated walls. Though the bedroom certainly picks up on the polished ethos that influenced the design throughout the rest of the apartment, it was a watercolor landscape painted by Kubie’s grandmother that served as the dwelling’s original muse.

“Art is of course a wonderful source of inspiration because it helps set palettes, tones, and often anchors a physical sense of space,” says Crawford. “Personal artifacts both serve to encapsulate memories for my clients and give me really valuable keys to helping them design homes that will be resonant of their personal histories.”

Our Renovation issue is here! Subscribe now to step inside Leanne Ford’s latest project: her own historic Pennsylvania home. Plus, discover our new rules of reno.