Design | Home As We Know It | Home Improvement | Outdoor | Renovation

Its multiple “rooms” include a tub and firepit. 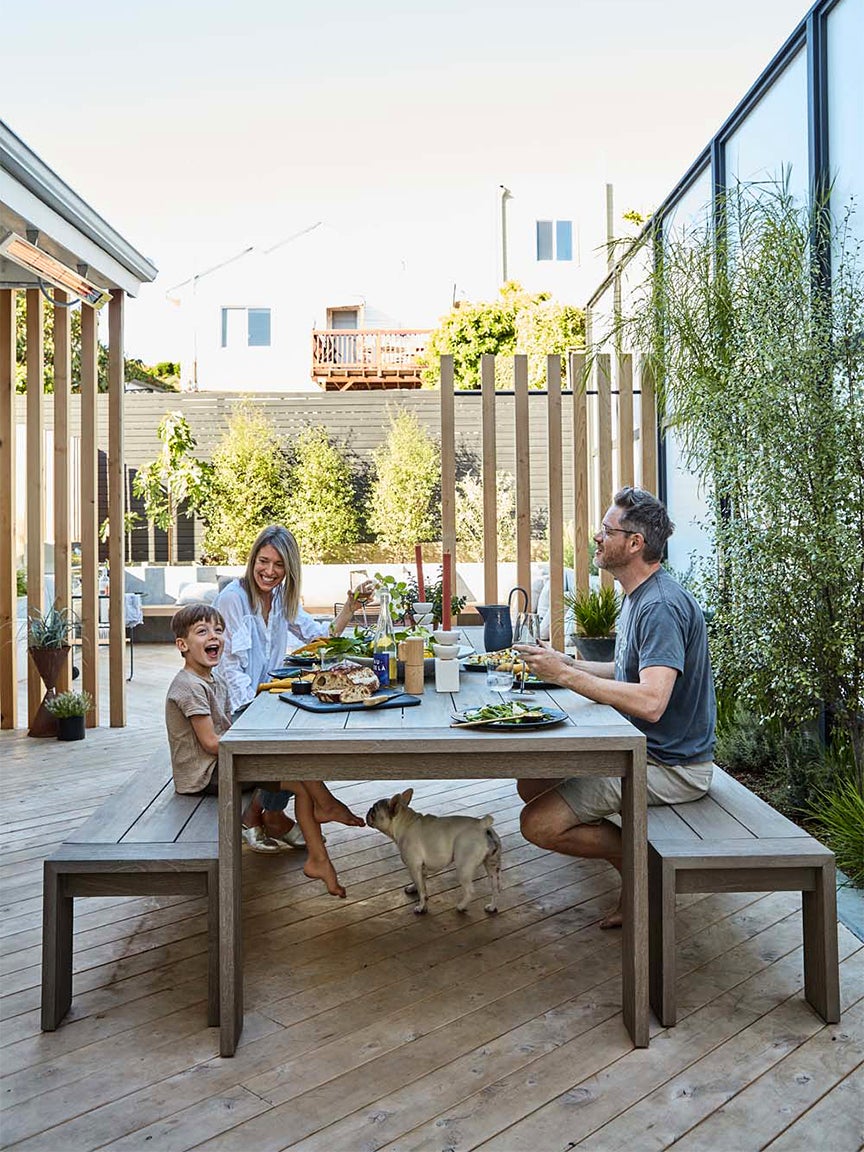 In San Francisco, finding a Victorian home on a double lot is like unearthing a gold mine. So when Erin Hiemstra and her husband, Chris Wick, stumbled upon their 1850s townhouse five years ago, it didn’t matter that the interior was falling apart and the yard resembled an overgrown (read: hazardous) secret garden: The potential was near endless.

“We were amazed at the amount of outdoor space,” Hiemstra recalls. However, while the property looked charming, it wasn’t functional or drought-resistant, and severe drainage issues ended up flooding their crawl space in the first year. “We inherited a hodgepodge of overplanting, multilevels held together by unmortared stacks of bricks, crumbling retaining walls, a mishmash of invasive trees planted too close to the house’s foundation, and other nuisance plants,” she says.

Hiemstra called on Beth Mullins of Growsgreen Design to overhaul the space. On the couple’s wish list: an outdoor dining area, in-ground soaking tub, vegetable garden, shed, firepit, and basketball pad for their 5-year-old son, Carter. “It was long, but we got every single element we wanted,” says Hiemstra. Here’s how they used every square foot to create distinct zones for work, downtime, and play—just in time for quarantine.

The lot had plenty of room on each side of the house, which Hiemstra was determined to maximize. She mapped out general corners for where she wanted things, starting with an entertaining space that opened up to the kitchen. “We wanted to create a community hub for our friends, our son’s friends, and their families,” she says. “Sadly, the lockdown has put a hold on that, but it’s still my long-term vision.”

Next to the dining area, they recessed a grill into a concrete counter to make room for prepping skewers and putting down a glass of wine, but opted out of having a sink to avoid plumbing. “I love the juxtaposition of the warm wood and cool natural elements,” adds Hiemstra. “They’ll both patina beautifully over time.”

Across from the dining space, Hiemstra dreamed up what she calls the “sit-back-and-chill zone,” complete with a firepit for cozying up on cool West Coast nights. “It’s the perfect place to sit and have a glass of wine after we put Carter to bed,” she says. Instead of an always-thirsty lawn, Hiemstra crafted a deck with built-in seating, which also leaves room for kids to run around.

To visually divide each “room” without blocking the view, Mullins installed vertical wood beams, then softened the hard material with plants inspired by the family’s recent trip to Puglia, Italy. “I came back wanting a yard filled with cactus, olive trees, agave, and rosemary,” says Hiemstra, who calls the look “California modern meets old-world Mediterranean.”

A few steps down from the living area is a sunken Japanese soaking tub, which smells great, keeps the space streamlined, and has natural antibacterial properties (so you don’t have to use as many chemicals to keep the water clean). Behind another wood screen, Hiemstra added an outdoor shower from Signature Hardware for rinsing off after evening soaks.

Cedar can be found throughout most of the backyard, including the horizontal plank fences painted black and on the shed’s exterior. The only exception: the east side, where opaque polycarbonate sheeting framed in black keeps the area from feeling too gloomy. “The original fence was an old corrugated plastic, which was yellowed and ugly, but I loved that it let light through, and I didn’t want to lose that,” says Hiemstra.

At her son’s request, Hiemstra built a garden with raised beds to the left of the front yard. “He is the family ‘farmer’ and decided to plant strawberries, beans, snap peas, pumpkins, cucumbers, bell peppers, and tomatoes,” she says. “It was all his idea.” His parents give Carter free rein: “If we want to protect the earth, we need to teach children its importance and what we can reap from it.”

Hiemstra’s studio (and her favorite hideaway of the bunch) is a 10-by-10-foot tucked-away structure by Modern Spaces & Sheds with a black shou sugi ban exterior, a Japanese technique that waterproofs cedar. “To have a space to retreat to for work has been the biggest gift during this difficult time,” says Hiemstra, who now runs her site, Apartment34, from home. “It’s just like Virginia Woolf said, every woman needs a room of one’s own.”