The reception backdrop was made from fabric scraps. 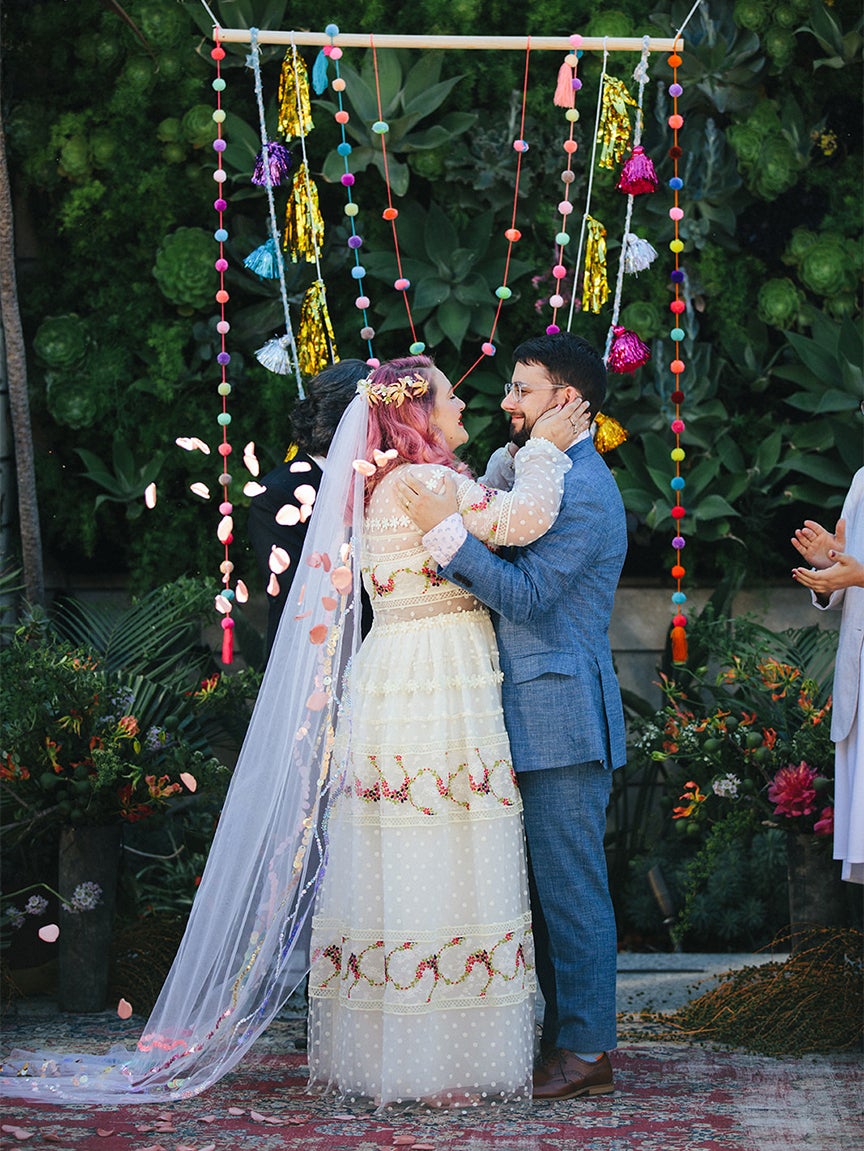 Two years ago, Alex Lake decided to propose to Gina Röckenwagner on her favorite holiday: Easter. It just so happened that it coincided with April Fools’ Day. “I was sitting on the couch knitting in my pajamas,” Gina recalls. “I was so surprised, that I didn’t think it was real.” As they are both artists (Alex primarily works with film; Gina makes textiles and quilts), it was clear from the get-go that their wedding would be a vibrant affair. “When we were trying to pick a palette, it wasn’t even a thought: I was like, all the colors,” says Gina, who has been known to coordinate her nail polish according to ROYGBIV and dye her hair pink.

The theme for the June 2019 celebration, which took place at SmogShoppe, a former mechanic’s garage–turned–garden space in the heart of the Culver City, California, art district, was “urban jungle boho with tons of rainbows,” she says. The pair fell in love with the venue’s quirky, vintage details, like the giant cat painting in the women’s restroom and the 20-foot cinema screen. They brought much of the vision to life themselves by using the weeks leading up to the ceremony to paint, dye, and bedazzle different decor elements for the big day. “We wanted it to be very honest,” says Gina. “Not some prepackaged, cookie-cutter event.” Instructing her florist to make the arrangements as “weird as possible” was only the beginning. Ahead, Gina shares a few other key elements and DIYs that made the day extra-personal.

Alex and Gina made the psychedelic dinner napkins from scratch using a process called ice dyeing. After tearing plain fabric into 20-by-20-inch squares, she covered the napkins in ice and then sprinkled powdered dye over the cubes so it left organic cloudlike patterns. To create a gradient table display, she used about 30 different hues. After they were washed, Alex ironed every single napkin (a huge time commitment, says Gina) and pulled off any extra threads along the edges so they wouldn’t fray all over the guests. Gina used the leftover cutoffs to make quilts, some of which went to family and friends who helped plan the wedding, as well as a sunburst version that served as a backdrop at the reception.

A fusion of textile scraps, sourced from the couple’s travels to Latin America, served as the ceremonial backdrop. The bride’s brother and two of her former college roommates suspended the display from cords the morning of. “I can’t pass up a cool tassel,” says Gina. Before the ring exchange, she performed Kacey Musgraves’s “Rainbow,” accompanied by her childhood guitar teacher.

Gina adorned her basic tulle veil with opalescent sequins, which she ordered in bulk from Cartwright’s for $100. To get started, she secured the material in a large embroidery hoop on a stand against a piece of muslin. Working in the evenings over the course of two weeks, the pro sewer weaved the sequins together on strands of thread, discarding any beads with too-sharp angles that would catch on the delicate fabric. “It was harder to find fabric that was wide enough so I didn’t have to put a seam into it than it was to actually make it,” she says.

The his-and-hers desserts were partially inspired by a scene in the film Steel Magnolias involving a groom’s armadillo-shaped red velvet cake. “We thought that was so cool,” says Gina. “Like why shouldn’t the groom get a cake?” It wasn’t her intention to be DIYing up until the very last second, but when Gina realized she had time to spare while waiting for her makeup artist to arrive that morning, she got to work on a pair of toppers: a letter A for the chocolate option; G for the triple berry. She also killed some time by painting cards for friends and putting together gifts for the coed wedding party. “I probably should have relinquished some control,” she says. “But I don’t have any regrets.”