It all started with a pre-ceremony ocean plunge. 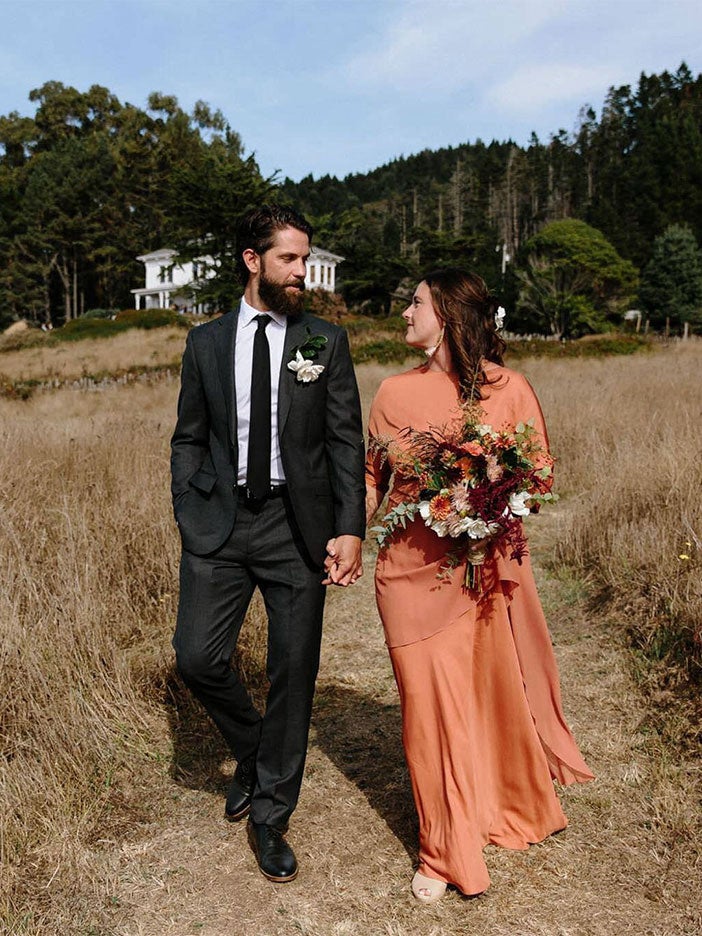 Sophie Rose Conner and Justin Wright had been together for six years when they found themselves in Lisbon, on the tail end of a work trip. “We were taking a walk around midnight and ended up in a random alley,” remembers Sophie. Then, seemingly out of the blue, Justin proposed. “It seemed as good a place as any,” he jokes. Not wanting to head directly back to the Airbnb where they were crashing with a couple of friends, they continued meandering around the quiet streets looking for something to toast their engagement with and stumbled across an open French door. “There was this little old woman inside watching Portuguese sitcoms, and she had a table with a tray full of thimbles of cherry wine,” continues Justin. “That was our cheers.”

The rest of their yearlong engagement was full of equally serendipitous events. They found their venue, a restored 1884 farmhouse on California’s Mendocino coast called Switzer Farm, on Vrbo. It was the only place they saw: The intimate setting was the perfect backdrop for their ideal wedding, a dinner party. They both have creative backgrounds (Justin is a chef; Sophie is a designer and florist) and wanted to plan a smaller shindig on their own. “We’d worked a few 20-person weddings before and they felt so special,” says Sophie. “Everyone has time to talk to one another and spend time together.”

They let the October date dictate the menu and the decor, and they recruited friends and family to help with everything from drinks to the cake. Justin worked right up to the last two days before the wedding, and everyone pitched in for the final touches, setting up the lighting on the lawn for post-ceremony dancing and hitting up local thrift stores for extra dishware. “It was a lot but honestly didn’t feel stressful because everyone just went for it and chipped in,” says Sophie. Here’s how they pulled it all together.

Choose Your Menu According to What’s Available

As a chef, Justin was tired of traditional wedding food, so one perk of hosting 40 guests was getting to focus on quality over quantity. He sourced everything from farms and local Bay Area vendors, starting with a seafood grill (inspired by Portuguese cuisine, in homage to the night that started it all) for the welcome dinner. “Before we got the sea bass and shrimp on there, we were just grilling up bread and sea urchin from down the coast,” he says. “I couldn’t have scripted it any better.”

For the main event, they picked late-season California tomatoes and lamb with salsa verde. Everything was served family-style, right down to the breakfast the morning after: They bought a couple cartons of eggs, and people whipped up whatever they wanted on their own time.

If You Have Talented Family Members, Recruit Them

Right before the ceremony, the chef who was originally supposed to make the cakes fell through. Luckily, Justin’s sister is a talented pastry chef. “We totally put her on the spot,” he says. After finding Meyer lemons at the market, she decided to make the dessert citrus-themed and started baking. “She made them in her Airbnb,” says Justin. “She had a couple of springform pans and just completely nailed it.”

On Sophie’s side, her sister and brother-in-law distill gin—and after coming across juniper berries on a walk, they decided to harvest them, turn them into a drink, and bring bottles of it to the wedding. “We have other friends who make their own tonic, which they brought, too,” says Justin. “Right after the ceremony, we all toasted with homemade gin and tonics.”

Don’t Stress About Having a Palette

Sophie did all the flower arrangements with her aunt, who is also a florist. “I got up at 5 a.m. on Wednesday morning and went to the San Francisco Flower Mart on my own, coffee in hand,” she says. “That was the moment it sort of hit me that I was shopping for our weekend.” Working with what was available in the California autumn, she picked dahlias, scabiosa, gardenias, and an assortment of wild grasses and branches. Her persimmon-colored dress was a total coincidence. “I tried on four dresses the same day, and this one fit me perfectly,” she says.

“We didn’t even have invitations; we just called people and were like, you’re coming!” says Sophie. That spirit continued up until the ceremony itself, when both parties unknowingly ditched getting ready to take a dip in the ocean. Justin went with his brother—he lost track of time and just threw a comb through his hair before he headed down the aisle. Sophie also went with her friends for a last-minute swim. “Little did I know Justin had just done the same thing,” she says, laughing. “It was cool that we both took an ocean plunge right before.”

Flip the Script on Tradition

“We knew from the get-go that we wanted our friend Bay to marry us,” explains Sophie. “We didn’t really prompt her with anything, so we had no idea what the ceremony was going to be like—it ended up being really special.” Once the spoken portion was over, she gathered everyone in a circle around the newlyweds and instructed them to hold hands and…howl. “She was like, ‘We’re going to let it out for Sophie and Justin as they embark on their new chapter; feel free to let it out!’” remembers Sophie. “It was so fun and such a release with tears and laughter.” The ceremony was full of these personal twists from the very beginning: The couple walked down the aisle at the same time with both their parents. “We felt like all those things were important: to have it be a shared event.”