Couples are taking matters into their own hands. 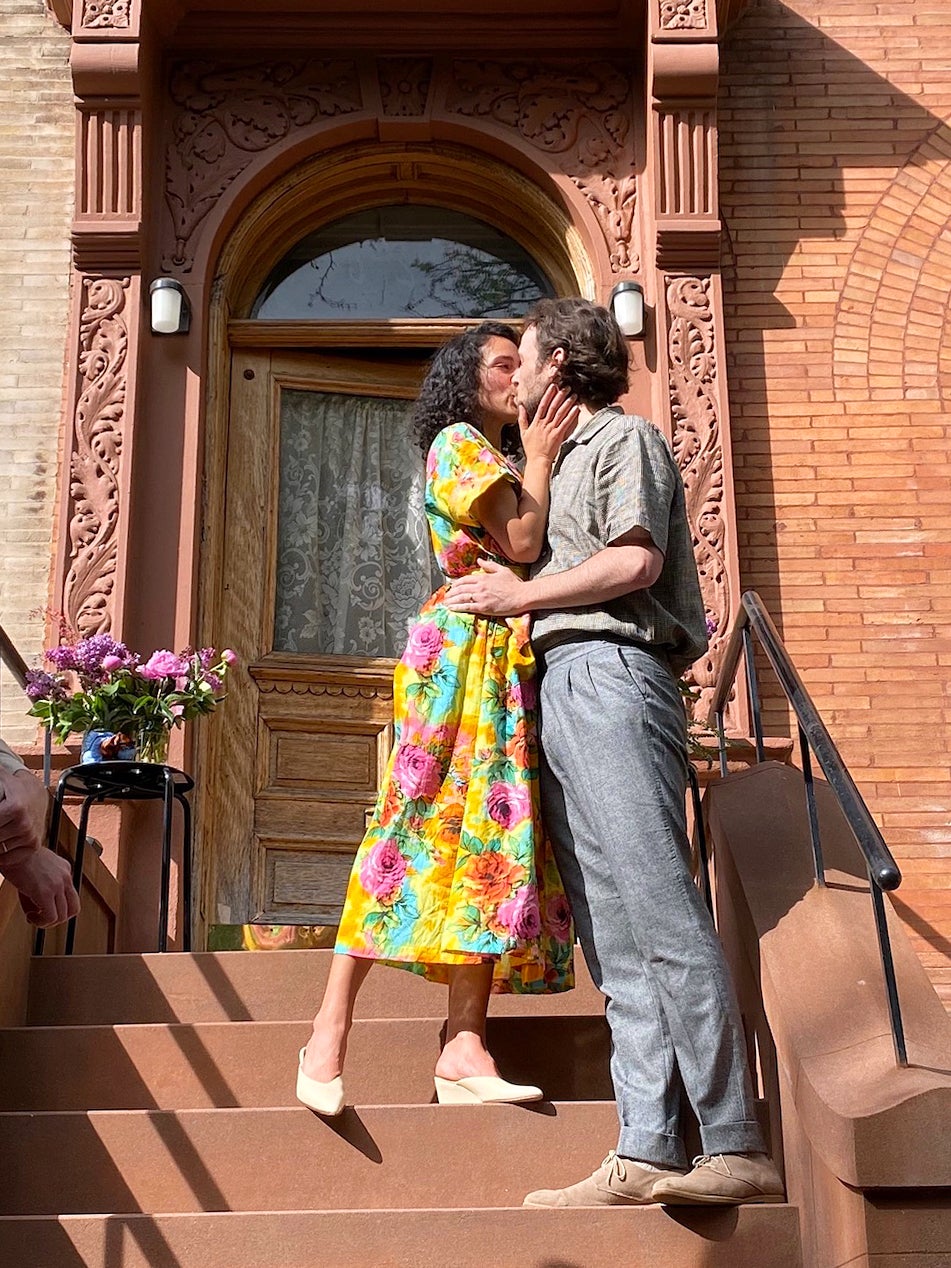 Xotchiltl Vasquez and Daniel Ballard initially planned to get married at the Boathouse in Brooklyn’s Prospect Park, a two-block walk from their Park Slope apartment. The caterers were booked. The guest list was set. Vasquez’s dress was ready. Then early this spring, it became clear that their dream June wedding (which was also going to be their unofficial send-off from the city) wasn’t going to happen due to COVID-19. So they postponed the big celebration to next year and said “I do” on their front stoop instead. “We didn’t want to not get married, because it was our goodbye to New York,” says Vasquez.

A stoop might not seem like a particularly special spot, but for many who lack a backyard, balcony, or rooftop, this small slice of outdoor space holds special significance—now more than ever. “Eloping in New York City has always been romantic,” says photographer Sylvie Rosokoff. “Tying the knot close to (or at) home is about as personal and memorable as you can get.”

At first, virtual weddings, where guests attend via Zoom or FaceTime, appeared to be the only alternative to canceling or postponing during the pandemic. But the stoop has begun to present itself as a viable option for city dwellers. Elaine Welteroth, Project Runway judge and former editor-in-chief of Teen Vogue, and musician Jonathan Singletary also recently held a ceremony on their front steps, which were lined with flowers by Lewis Miller Design. As with Vasquez’s mini block party, attendees wore masks and observed the nuptials from a safe distance on the sidewalk or street.

Both arrangements were largely communal efforts, with friends stepping in as photographers and florists. Taking on these roles is part of the deal, given many professionals in the industry aren’t able to accept bookings. “It’s been a lot of strange adjustments,” says photographer AJ Tamari. “From my understanding, I’m a nonessential business and therefore not allowed to work, so I’ve made my peace with that and have been erring on the cautious side.” As Tamari waits for restrictions to be lifted, she’s been finding other ways to stay busy and help couples during this time, like conducting virtual photo shoots, in which she captures people in their homes through the screen.

So how exactly do you pull off a stoop wedding on your own? First, you touch base with your neighbors. Vasquez and Ballard were lucky that the other tenants in their family-owned building weren’t just cool with it—they were over the moon. “I told them the day before that we wanted to get married in the park, and they were like, you should do it here!” recalls Vasquez. She returned her white gown and wore a vibrant floral dress from Etsy that came with a matching fabric face mask and carried bodega flowers as her bouquet.

Four couples attended the event in person; everyone else tuned in over Zoom. Vasquez admits the service was spotty, but she says it was a good opportunity for loved ones to connect with one another. “I don’t think my family had ever really talked to my husband’s,” she says. The 4:30 p.m. ceremony took all of three minutes, so afterward guests drank champagne out of glasses they brought themselves and ate olive oil cupcakes until it was time to cheer for the essential workers at 7 p.m. “The street was practically empty that day and there were all these beautiful brownstones around us,” Vasquez recalls of the low-stress event. “My mom said it looked like something out of a movie.”