This Creative Couple’s Wedding Venue Had a Strict Curfew, So They Threw a Silent Disco

It was the perfect after-party. 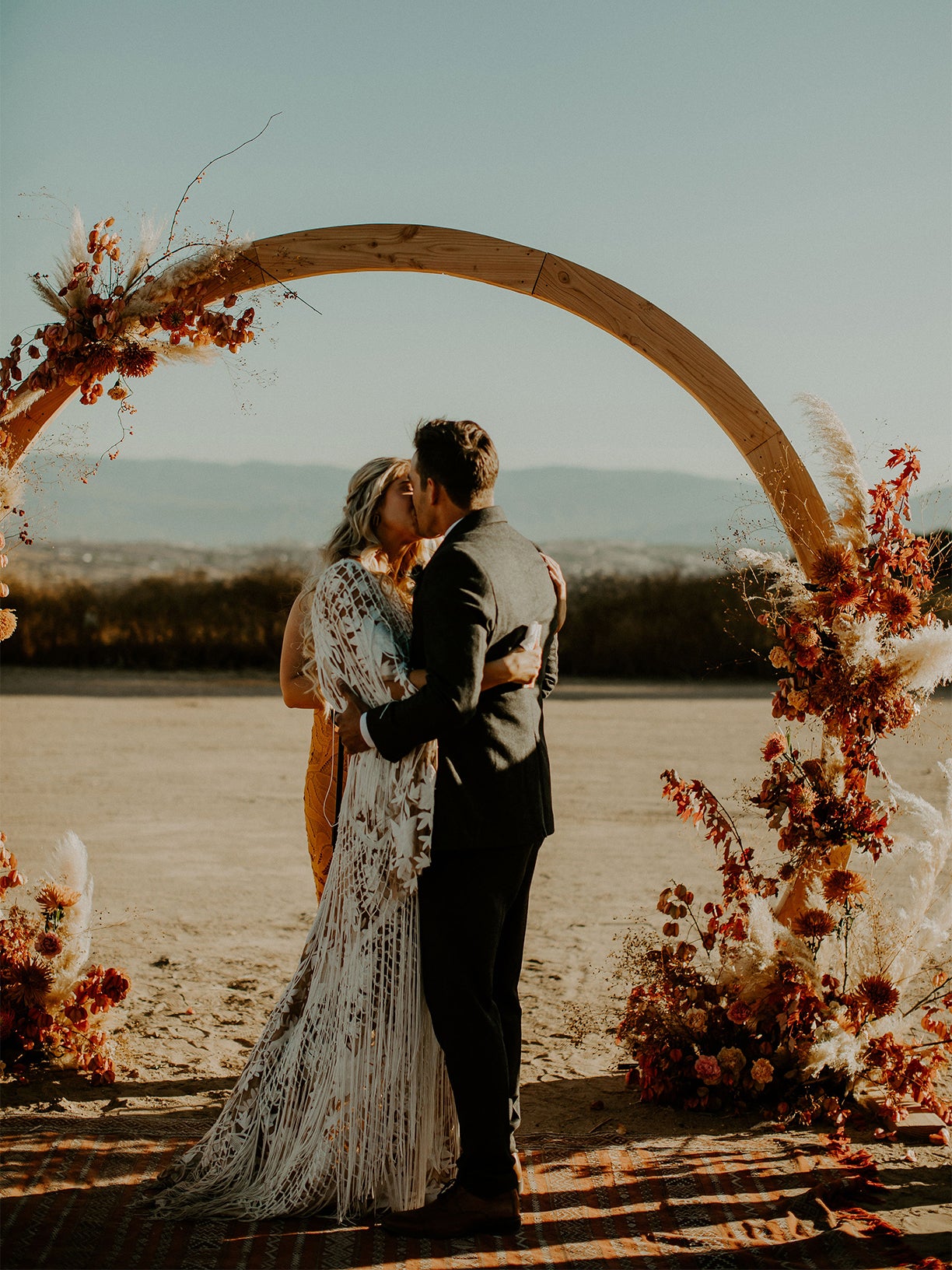 “We’ve always connected on an artistic level,” says Heather Gadbury of her husband, Kyle, whom she met in art school. So when the couple, she an interior designer and he a construction superintendent, started planning their dream California wedding on a 20-acre pistachio farm in Temecula, their creativity took center stage. And it kind of had to.

Because they had a limited budget, they rolled up their sleeves, both literally and figuratively, and put their talents to work. The result? A fall desert-inspired celebration that featured handmade decor elements, a rustic-meets-modern table setting, glamping tents, and a late-night dance party.

“We decided what was really important to us, and we kind of phased everything from there,” says Heather. For example, she and Kyle found a pretty original way to work around their venue’s noise ordinance so they could still throw an after-party with music on-site for their 100 guests.

And thanks to Kyle’s craftiness, they managed to put their unique spin on classic decor items such as the ceremony arch—and save quite a bit by doing so. Here, they give us a behind-the-scenes look on how they tackled some of the most common wedding-planning woes.

They Made the Ceremony Arch From Scratch

Since Kyle had significant woodworking experience—he’s been working in construction since he was 16—and has always enjoyed designing and building things, he decided to make the arch himself. It took him about two months and $250—mostly spent on Douglas fir sourced from San Diego—to complete it.

Creating a completely symmetrical design came with its challenges. After cutting the pieces, he laid them on the ground and found the center point—much like a compass— to which he attached a string with a pencil on the other end. He then walked around with it so he could get a smoother curve. After assembling the wood pieces with glue and screws, Kyle divided the piece into two semi-arches that he then screwed together on-site.

“We stood under it and it was at that moment that we realized what it would be like standing at the altar. It definitely meant a lot to Kyle to put the time and effort into making something that we would remember forever,” says Heather.

They Traded Skills to Keep Costs Down

In exchange for creating the floral arrangements for her wedding, Heather helped Native Poppy with the interior design of its new store—an arrangement that ultimately saved her about $9,000. “You meet most vendors two or three times, but it was nice to build that relationship,” she says. “Now we stay in touch day-to-day on social media, and I stop by the shop every once in a while to get flowers. It turned into a friendship.”

Heather’s only big-day directive was that the florists follow the event’s dusty desert, fall-inspired color palette of rust, amber yellow, and charcoal gray—and include pampas grass. The feather-like fronds appeared in the table centerpieces, by the arch, and on the benches that lined the aisle. After the wedding, she dried a few branches that she then put in vases and placed around their house as a reminder of the day the couple said “I do.”

The Sweetest Contribution Came From Her Grandfather

Creativity and craftiness definitely run in Heather’s family. Her grandmother is an avid artist, and over the years, her grandfather built wood displays to show off her work—so Heather and Kyle enlisted him to create cactus stands for their big day.

It was another beautiful and cost-saving addition to their wedding decor—it only cost her grandfather about $150 to buy materials for all five stands, including hardware and paint.

He started off by measuring the succulent pots to determine the dimensions of the stands and the shelf spacing—each stand was designed to have five shelves, with each shelf holding five succulent pots that displayed the wedding favors.

Once he determined the dimensions, he cut the shelves and frame parts from pine boards and assembled them. He attached the legs using 1/4-inch bolts and wingnuts so they could easily be loosened and folded for easy transportation and storage.

“It was important to us to be able to throw a really big party and spend the entire night with the people closest to us,” says Heather. To get around the venue’s strict 10 p.m. curfew, the couple got crafty and hosted a silent disco in front of the glamping-style tents where the bridesmaids and groomsmen were staying. Their vendor, Silent Storm, shipped them all the equipment they needed: wireless headphones and transmitters that linked to the music stations.

To spread the musical joy, the couple placed headphones for each guest on a big hand-painted board made by Heather and one of her girlfriends, and curated three playlists—funk, hip-hop, and disco—with the help of their friends.

“We danced around the fire and in the grass—it was so much fun,” says Heather. “It was just a different way to cap the night and not leave the wedding. Everyone had such a great time.”

See more wedding stories: How One Couple Pulled Off a Two-Day, Two-City Wedding Without a Pro Planner Our Destination Wedding Was More Affordable Than a Local Ceremony Of Course, This Designer Had a Perfectly Imperfect Wedding Tablescape